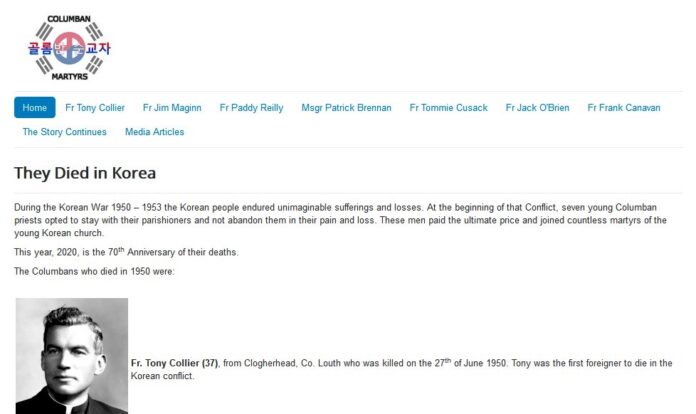 Stephanie McNamara, the niece of Fr Tommie Cusack, one of the seven Columban priests killed during the Korean War, has launched a new website which gathers together information and resources on the seven martyrs.

On the website, Stephanie recalls how during the Korean War, the names of missing priests were announced on the radio at the end of the nightly news.

One night the names Monsignor Patrick Brennan, Fr Thomas Cusack and Fr John O’Brien were listed. “That is how our Grandmother heard it,” explains Stephanie.

During the Korean War (1950–1953) the Korean people endured unimaginable sufferings and losses.

At the beginning of that conflict, seven young Columban priests opted to stay with their parishioners and not abandon them in their pain and loss. These men paid the ultimate price and joined countless martyrs of the young Korean church.

This year is the 70th Anniversary of their deaths.

Fr Tony Collier (37) from Clogherhead, Co Louth who was killed on the 27th June 1950. Tony was the first foreigner to die in the Korean conflict.

Fr Jim Maginn (38) of Newcastle, Co Down (born in Butte, Montana to Irish parents) who had been missing in Korea since June 1950, was killed on 4th July of that year.

Monsignor Patrick Brennan (49) from Chicago, of Irish parents, who was killed on the 24th September 1950 at the Massacre at Taejon.

Fr Tommie Cusack (39) from Ballycotton, Liscannor, Co Clare who was killed on the 24th September 1950 at the Massacre at Taejon.

Fr Jack O’Brien (31) from Donamon, Co Roscommon, who was killed on the 24th September 1950 at the Massacre at Taejon.

Fr Frank Canavan (35) from Headford, Co Galway who died in a prison camp in North Korea on the 6th December 1950.

On 4th December he told Monsignor Tom Quinlan, who was in the prison camp with him, “I will be having Christmas dinner in Heaven.”

The names of these seven young priests were inscribed in the Book of Martyrs presented to Pope John Paul II at a ceremony in the Coliseum in Rome in 2000 commemorating Martyrs of the 20th Century.

On Wednesday 28th August 2013 the Cause of the Seven Columban priests was opened – they are among the 81 Modern Martyrs of Korea.

Every Sunday throughout the Diocese of Seoul, at the beginning of Mass, the people offer a prayer for the beatification of the Columban Martyrs.

The prayer on their prayer card reads:

Prayer for the Columban Priest Martyrs

God, in the midst of ideological conflict and the wound of division, when all the rivers and mountains were engulfed in the gunfire of war, we thank you for sending good shepherds, faithful witnesses to show us that love is greater than hate. In your mercy, bless your faithful servants and through their intercession hear our prayers. St Columban Pray for us. Amen.