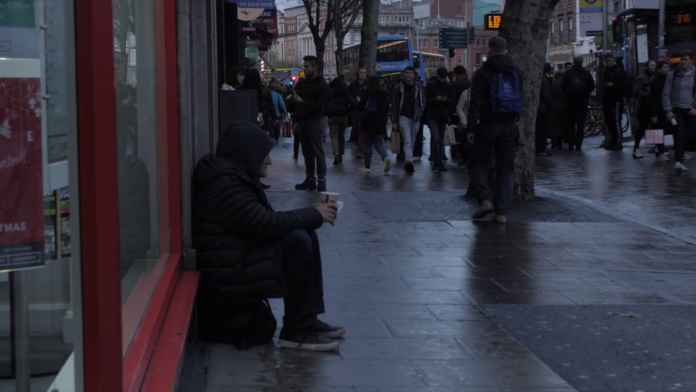 A radio documentary on homelessness which Fr Malachy Smyth co-produced will be broadcast on Newstalk radio this weekend and again next weekend.

‘Bricks and Mortar’ is a collaboration between Fr Malachy and Brian Kenny. The making of the programme was supported by a grant from the Missionary Society of St Columban.

It looks at the effect of Ireland’s housing and homeless crisis on society and the plight of Irish migrants forced into homelessness in the UK in the recent past.

Homelessness has traditionally been seen by many people as individuals sleeping rough but as the documentary shows, there can be major differences as to how people are homeless.

The documentary speaks to professionals working with the charity Safety Net who talk through the differences between people who are on the streets due to substance and mental health issues as opposed to people who are unable to access accommodation due to a housing shortage.

Speaking to Columbans.ie, Fr Malachy Smyth of Columban Communications commented, “Housing and homeless are two words that are becoming all too common in the landscape of our time. As the homeless crisis deepens it is also referred to as the silent crisis reaching into the rural areas of Ireland. But it is important to step back and to look at the problem from different perspectives.”

“If enough houses could be built tomorrow to solve the housing shortage many people would still remain homeless. In fact, there have been rough sleepers in Ireland long before the current crisis began.”

“This radio documentary looks at the impact of the crisis on different groups of people across society at the present time and asks if a solution can be found. It shares stories from the streets of our cities and from rural areas of Galway and Mayo.”

Rather than solely focusing on the causes and effects of the current deficit in accommodation supply, the documentary looks at the larger impact of homelessness and the concept of a house and a home itself.

Brian Carey from Trinity College Dublin’s Department of Philosophy investigates the possible cause of society’s paralysis in fixing this issue that all everyone agrees needs to be addressed.

Renowned charity worker Christina Noble observes that nothing has changed in Ireland since she was a homeless child on the streets of Dublin and dug a hole in the grounds of the Phoenix Park to find shelter.

The documentary also talks to Fr Bobby Gilmore, who worked throughout the ’70s and ’80s with Irish homeless people in London, Manchester and Birmingham. He recalls some harrowing tales of individuals he came across through his work. Listeners hear how homelessness affects the soul of people and how easy it is to get trapped in a negative cycle.

Fr Bobby explains how the people he worked with in England often chose not to access state services initially as they always felt like they were going to go home to Ireland until they became lost.

He also explains how often accommodation and social housing was available to people in England whereas coming back to Ireland, he was shocked to see a homeless problem where state services are not available to those who are (unlike his experience in the UK) actively looking to access them.

Bricks and Mortar will air on Newstalk 106-108fm on Sunday 19th January at 7am, with a repeat broadcast the following Saturday 25th January at 9pm

‘Bricks and Mortar’ was produced by Brian Kenny and Fr Malachy Smyth and was supported by a grant from the Columban Missionary Society.