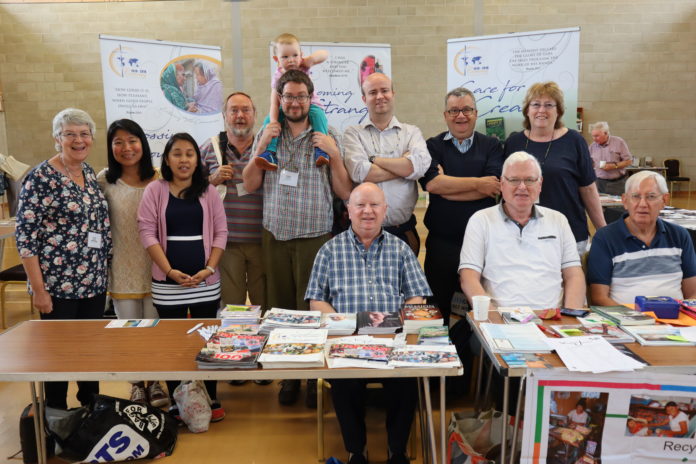 The 40th conference of the National Justice and Peace Network (NJPN) took place recently in Derbyshire and had as its theme, ‘In the shelter of each other the people live’.

Through several keynote speakers and workshops, the conference explored how to build a Church and a society with the marginalised, the excluded and the most vulnerable at its heart.

The NJPN conference was organised in partnership with Church Action on Poverty, Housing Justice, the Prison Advice and Care Trust and Apostleship of the Sea.

As well as justice and peace representatives from dioceses in England and Wales and Scotland, missionary groups were also represented including a delegation of 19 Columbans, along with Mill Hill missionaries and the Assumption Sisters.

Actions identified at the end of the conference were generated in 15 workshops.

The Pax Christi workshop on violence, was led by Pat Gaffney, and called for the culture of militarism to be challenged as well as the British government’s sale of arms to Saudi Arabia. It also called for letters to the British Foreign Secretary urging him to speak out against the destruction of Bedouin communities in the West Bank.

Fr Dan Mason, the National Chaplain for Gypsies, Roma and Travellers, led a discussion on ways the Church could be more supportive and welcoming of travelling people. 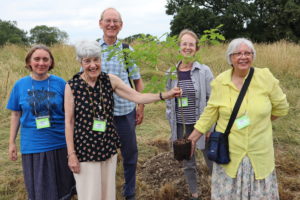 The Medaille Trust suggested ways of tackling slavery in our society. Catholic environmentalist Mary Colwell highlighted how ‘home’ is changing for wildlife due to climate change and distributed copies of her latest book on curlews.

A workshop on interfaith outreach, led by Columban Fr Jim Fleming, who worked for two decades in Pakistan, called for a valuing of differences and the building community collaboratively.

In his workshop, which was booked out, Fr Jim outlined to participants some of the lessons learnt from engaging with ‘the other’ in interfaith dialogue.

These included recognising the richness in diversity and underlining the need to always relate as equal partners in the search for truth.

“Always be aware of your own need for ongoing conversion to your own beliefs; always be hungry for knowledge about the other’s religion and culture. Always be honest in sharing your beliefs and don’t water those beliefs down to accommodate others,” Fr Jim told the participants.

He also stressed, “It is not our job to convert anyone; our job is to be faithful to our beliefs and our own calling as followers of Jesus.” 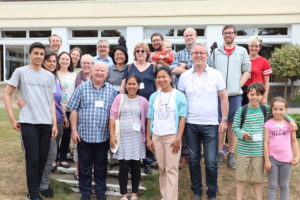 He highlighted how “It is important that we don’t see people as a threat.”

He said the future of the church and the church of the future would be one that is in dialogue with other faiths, philosophies and ideologies.

Christians, he suggested, are challenged to looked beyond survival.

Key questions posed at the end of Fr Jim Fleming’s workshop included how can we motivate and animate Christians to get involved in interfaith dialogue? How do we create opportunities to meet and start dialogue on the ground?

Another key question is what is the future of inner city churches in multicultural areas and how can Christians learn to be leaven particularly if they are a minority in countries such as Pakistan where they really struggle.

He discussed the difficulties that ‘in your face’ proselytism can create for interfaith dialogue, but he also suggested that those engaged in this dialogue should never rule out proclamation which could take the form of ‘tell me what you believe, and I’ll tell you what I believe.’ 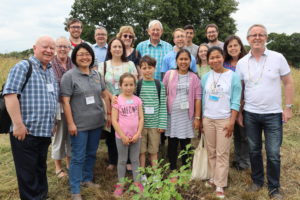 According to Fr Jim, there is little room for syncretism in true interfaith dialogue and beliefs should not be watered down in order to make all faiths seem the same.

One of the suggested outcomes for participants was to make the effort to visit different places of worship.

At the NJPN conference, beautiful liturgies, incorporating Justice, Peace and Ecology were led by the Marshall family of Chesterfield. The opening hymn on the Friday was the Marty Haugen hymn with the opening line, “Let us build a house where love can dwell, and all can safely live”, encompassing the vision of the conference.

On a hot Saturday afternoon 45 people set off on a ‘Share the Journey’ walk, led by Maria Elena Arana of CAFOD.

On Saturday evening a documentary film about Archbishop Oscar Romero of El Salvador, called ‘The Claim’ was shown. The Archbishop, who showed extraordinary compassion for the poor and was martyred in 1980, will be canonised later this October. He is a patron of NJPN.

Around 30 organisations had stalls in the Just Fair including the Columbans.

Anne Peacey, NJPN Chair from Hallam J&P, concluded the conference by saying: “We seek a place to be Church, to be positive and joyous, and for all, not just the many.” 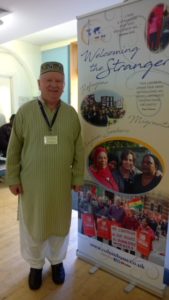 Fr Jim Fleming explains how he got involved in interfaith dialogue:

It was our first mission to Pakistan and I was one of the six sent. Reluctantly I said yes. I spent the next 20 years there. I was in Lahore for 12-13 years and then I was asked to go down and work with the tribal people in the south, the Parkari Kholi people, I was there for the rest of my time in Pakistan along with Paul McMahon and Denis Carter.

I was very much in my comfort zone without fully realising it in the Philippines where I lived and worked among fellow Christians When I went to Pakistan I found myself in a very alien culture. I remember the first day after arriving, I left the house where we were staying to go to the post office and all I saw were men on the streets – I turned back. I felt a little apprehensive. Having shared with someone else about my apprehension, they suggested that the next time I went out I should smile. I did and then I found the people were very friendly.

It was a multicultural situation in the sense that it was mainly Muslim, but there were some Christians of Hindu background who had been untouchables.

All six Columbans studied Urdu and Punjabi. We went into work in parishes with local priests so that we would learn from them about this situation. I was in a rural parish – it was very challenging. It was so different from the Philippines. It was a very Islamic context in every sense of the word and it took quite a while to adjust to the whole lifestyle; there were very few opportunities for recreation.

After three years in Pakistan I was invited back to Ireland for the centenary of the parish church in Castleisland, Co Kerry. Back in Ireland I really was very reluctant to go back to Pakistan because I thought I would not be able to face it. My main concern was that I wouldn’t be able to manage because of the language – it is a Persian Arabic language. But once back in Pakistan I was able to manage, and I knew I would survive.

After 20 years I was assigned to Britain because I had then turned 50 and my mother was 80 and I wanted to spend some time with my mother and be closer to her. After a year on mission appeals I asked for permission to go full-time into interfaith dialogue and that was when I moved out of the Columban House and found a flat in the Muslim area of Spark Hill in Birmingham.

I arrived in Spark Hill at end of Ramadan and went straight to the local Muslim shop and bought a gift for both of my neighbours to the right of my flat and both on my left and I wished them a happy Eid. They were absolutely stunned; I didn’t want for anything from then on. It was fantastic.

I was the only white person in the whole street of 136 houses. One day I was sitting inside at the window of the flat and the next thing I saw four young white men pass the window. I was living in Number 17 and they went into Number 27. So I knocked on their door and they invited me in. They said they had just arrived and had just been given accommodation by the Home Office because they were asylum seekers from Kosovar Albania – so they were ethnic Albanian Muslims.

I sat with them for a while. One of them could speak English. As I was sitting there I realised that they had very little furniture because they had basically got just a shell of a house.

So, we visited our Muslim neighbours and gave them a list of all the four men’s needs. We did the rounds and people were very kind and very understanding and within an hour, every single item that had been on that list came through the front door.

This was around 1999/2000 and there were hundreds of ethnic Albanians and Kosovans coming in at that time because of the war over there.

Within three months of that happening a group of us from different churches and denominations met in our church hall. We said this is the beginning of a very big flow and it may continue with people from other countries – what can we do about it? We had a meeting with representatives of the Albanian Kosovar community and we formed a charity called the Ethnic Albanian Foundation. We accompanied them for a year and a half and then they took over themselves and it still exists.

Later they were followed by another wave of asylum seekers from Afghanistan, then Iraqis and then after that from everywhere.

Now 18 years later I still meet some of those original Albanians that came back in 1999/2000 and they are now all professionals – they have all studied – it is fantastic.”