Home News Now is the time for a stronger role for women in the... 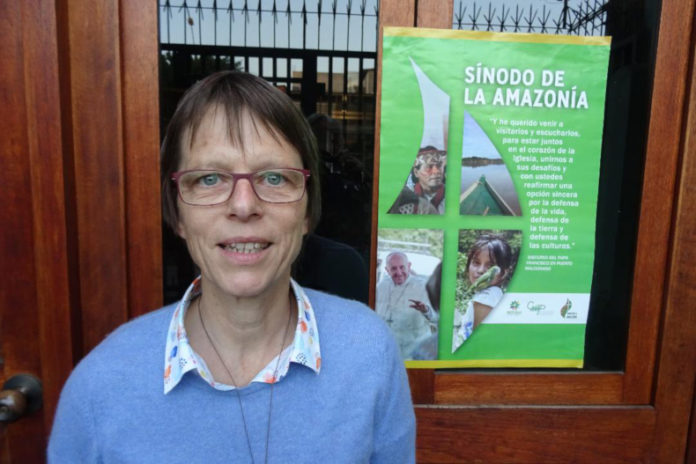 In the fourteenth of our series of articles on the Amazon Synod, Sr Birgit Weiler, MMS looks at the debate about women’s role in the Church which emerged during the synod.

Sr Birgit Weiler is a German Medical Mission Sister and theologian, who has worked with REPAM and participated as one of the experts in the Synod for Amazonia. She has been on mission in Peru since 1988, focusing on theology and pastoral work.

She is linked with the Columbans, especially in Peru, in the mission to promote the care of the Earth, our common home, as inspired by Laudato Si‘. She fosters a Christian creation spirituality and an ecological lifestyle.

The urgency to strengthen the role of women in the Church in general and the Amazonian Church in particular was a prominent topic at the recent Amazonia Synod in the Vatican. Not only many women, but also a good number of bishops, were outspoken about it, recognising that it has to be part of the “new ways for the Church and an integral ecology” in the Amazon region.

It was already a novelty at the Synod that, according to bishops with a long-standing experience of Bishops’ synods convoked by the General Secretariat of the Synod of Bishops, this one had been the one with the highest number of women – over 30 – participating in different functions in the Synod. Many presented their reflections during the time set aside for short interventions.

The statement which at the same time is a call – ‘¡Es la hora!’ or ‘Now is the Time’ – and I have used as the title for my reflection – has its origin in the intervention of the secretary of the Latin American and Caribbean Religious (women and men) Conference (CLAR), Sr Daniela Cannavina from Argentina.

She reminded us of the words of Pope Paul VI at the conclusion of Vatican Council II (1965) when he said, in a deeply prophetic spirit: “The hour is coming and in fact has come, when the vocation of woman is being achieved in its fullness, the hour in which woman acquires in the world an influence, an effect and a power never hitherto achieved. That is why, at this moment when the human race is undergoing so deep a transformation, women impregnated with the spirit of the Gospel can do so much to aid mankind in not falling.”

Sr Daniela called attention to the fact that already 54 years have passed since these words of Pope Paul VI and we still continue to reclaim that this hour finally may come.

Now is the time for transformation

Many women and bishops stressed at the Synod that now is the time to make it possible for women to assume their rightful place in the Church which demands a stronger role for them in various fields: pastoral care, theology and Church government.

The pastoral and ecclesial situation is an imperative, as well as the growing awareness in many societies and cultures worldwide of the equal dignity of men and women, and the women’s rights claim for necessary changes in our Church which have been awaited for so long. Therefore, the affirmation ‘Now is the Time’ became for many of us a kind of call or inspiring motto during the Synod.

In many moments of formal and informal encounter, and during sharing in the Synod or in the small working groups, there was the awareness that there needs to be persistent common efforts to overcome machismo and clericalism in our Church in general and in the Church of Amazonia in particular. There was also a call for many more women to be in leadership positions in the Church which do not require priestly ordination and for which many women have the necessary professional skills, qualifications, talents and skills.

In the small working group in which I participated during the Synod, one of the bishops, for example, appointed some time ago a woman as vicar general of his diocese who is exercising her responsibility of leadership in all affairs which, according to Canon Law, do not demand to be taken care of by a priest. Out of his experience and conviction the same bishop said that to become a synodal Church does not only mean to walk together as a faith community but also to discern and to decide together and that in the different phases of the process women need to be fully included.

In different moments of sharing reflections and insights it became very clear what was eventually stated in the final document of the Synod, namely the recognition that the need for a stronger role for women flows out of the given reality. In many parts of the Amazon region Church is present thanks to women and their strong faith commitment, because of the great shortage of priests. The vast majority of Catholic communities are only visited two or at most three times a year by a priest and have the opportunity to celebrate the Eucharist.

Many women, especially women religious, accompany and lead Christian communities, coordinate pastoral work and foment various initiatives like bible groups in which members of the community read together the Word of God and reflect on its meaning for their life in the Amazon context and in their communities. They are involved in caring for the health of the people, including indigenous knowledge and wisdom concerning herbal medicine and different treatments for many diseases present in that region.

There is a commitment to an integral ecology and a Christian creation spirituality and its practice in daily life. For this reason, as the final document manifests, there is a call to create a ministry for women as leaders of Christian Catholic communities. It is explicitly said that this would be in answer to the “changing demands of evangelisation and [pastoral] attention to the communities” (102).

Inspired by their faith commitment, many women, especially from the indigenous communities, are strongly committed to care for the territory of the Amazonian peoples with its rainforest, rivers and waterfalls; and to help their communities to discern well what is at stake when big companies come to offer them money and other benefits in order to get their consent to major projects with vast and long lasting negative impacts on the ecosystem of the region.

Therefore, she asked in deeply touching and moving words Pope Francis and all the participants in the Synod that the Church may recognise this critical moment of the Amazon region and its people at this point of history and be an ally of the indigenous and all the other different Amazon populations in their struggle for maintaining a living Amazonia.

Along the same lines, the German scientist Hans Joachim Schellnhuber, who is an expert in questions of climate change and its repercussions in different parts of the world, and who took part in the elaboration of the encyclical Laudato Si’, stressed very much that according to scientific studies there are only 10 years left to stop the ecological collapse of the region.

This would be through massive deforestation and multiple negative impacts on the ecosystems of the Amazon through projects which are mainly driven by the economic interest of maximum profit in a short time.

As Amazonia is the “biological heart of our planet”, said Schellnhuber, and is extremely important for the regulation of the climate on the Earth, its collapse would have very disastrous consequences not only for Latin America but for the whole world.

Though at times women, especially those who are leaders of communities and organisations, sometimes let themselves be corrupted by companies or authorities, generally they are known for being much less corruptible than men.

Many of them live out the strong vision of an integral ecology which is an essential part of their cultures and reminds them that human beings only can have a good future and a fulfilling life when they learn to live in community with the other people and with the other living beings, woven together in a web of life characterised by respectful interaction and interdependence.

One woman religious highlighted in her intervention at the synod that part of the new way in which we need to operate as a Church in Amazonia is the fostering of good education for women in conditions of poverty, especially in the indigenous communities. Many of them, after finalising their studies, prove to be highly committed to putting their knowledge at the service of their communities and of promoting a truly sustainable development which allows for a Good Life in the indigenous sense. It always implies ethical and community dimensions and means a Good Life for all and not only for a few.

The petition for strengthening the role of women in the Church and the explicit request expressed in many consultations realised in the Amazon region in preparation of the Synod, that the Church may allow for the permanent diaconate for women (see final document 103), are to be understood within the whole commitment of the Church in Amazonia. That is an undertaking to respond to the call to new ways for the Church in order to respond more fully to the very challenging social, cultural and ecological realities of this specific region with its potential, deep wounds and high risk of ecological devastation and collapse.

Through the final document the Church of Amazonia has assumed the commitment to be an ally of the peoples in struggling for the life of this region, a struggle for which the wisdom, knowledge, skills, talents of all peoples in that region are required.

At the same time, this struggle needs the commitment and solidarity of the people in other areas of the world in the awareness that all of us are part of Amazonia. To care for Amazonia is an expression of our love of God, that is love in action in solidarity with Amazonia and its peoples.

This is the fourteenth in a series of Columban articles this year about the Synod on Amazonia, held during October 2019 at the Vatican. All the articles are available on Independent Catholic News: www.indcatholicnews.com/search/amazonia and at https://columbancenter.org/Synod-on-Amazon-Model-for-World. The series of articles is called ‘Synod on the Amazon: Model for the World’.