Home News Missionaries helped us to be citizens of the world: Mary McAleese 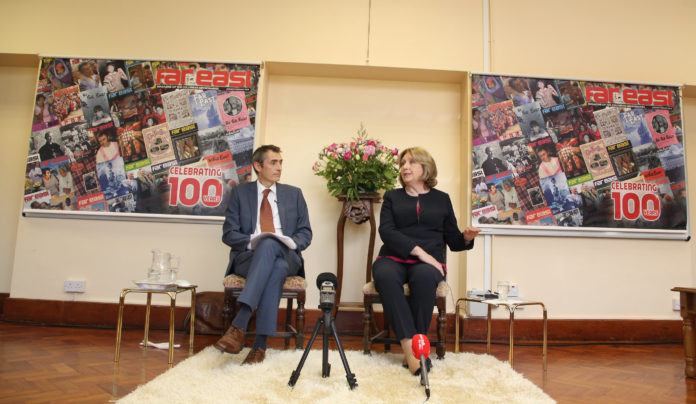 In the first of a series of transcripts, we reproduce former president, Dr Mary McAleese’s conversation with Irish Times journalist and author, Joe Humphreys. 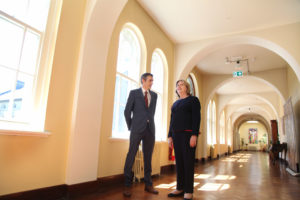 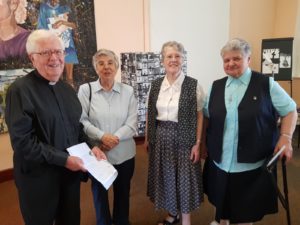 It was a dangerous enterprise to start on. I guess the first missionaries had to wing it to some degree as they didn’t have a huge amount of training. I know Bishop Galvin made the famous comment which [Fr] Neil [Collins] captured for his book [A Mad Thing to Do]. He described it as a mad thing to go out there to China and other places – it was a risky, high risk thing – though lots of good came out of it….

Question – What do you make of the Irish missionary movement, looking back over the past 100 years. It was a kind of a mad thing to do to some extent – to think that one could change the world by sending people from our little island here. 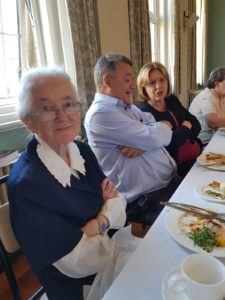 Mary McAleese Answer – But of course that is why the name Columbanus is the link isn’t it, because St Columbanus had done something possibly even madder – to set out from seventh century Ireland in a tiny craft from Bangor to head to the European mainland that was falling apart after the fall of the Roman empire.

What is remarkable to me is that Columbanus 13 centuries later is capable of really fuelling the missionary mentality and the missionary vision of a whole new raft of people. So, the first thing to say to the Columbans today is happy anniversary!

What an amazing legacy and what an amazing investment in people, in the gospel – what great sacrifice because you are quite right, in those early days when they went, there was huge suffering, there was martyrdom, there was a whole realm of an uncertain and unknown world. 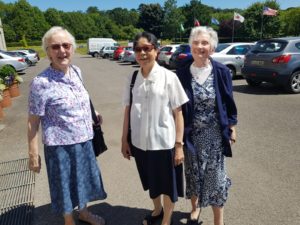 A few years ago, I had the privilege of being on a State visit to China when Hu Jintao was premier/president. He was the number one leader and a really interesting man.

We talked about the missionaries and I was saying to him, from an Irish perspective, we would regularly be told the stories of both the physical sacrifice they made because many of them endured privations and indeed torture.

He said two interesting things to me that made me stop in my tracks. He said the first problem for us with the Irish priests is that they came off the boats with the imperialists and we didn’t know the difference between them. 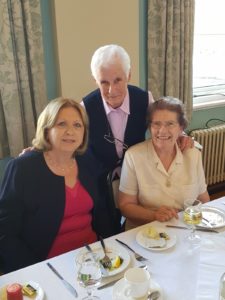 He said the second thing was we weren’t pagans, we were a people of faith and it took a while to understand that.

He had huge respect for them [Irish missionaries] and that is the thing that we all sometimes forget in Ireland; sometimes we can be characterised as overly insular. But between the huge number of generations that emigrated all over the world, either because they had to or they wanted to, but mostly because they had to, and because most of us belonged to a universal church, which literally covered five continents, and because our missionaries headed out to places that were quite closed off to us – China wasn’t a normal place for the Irish navvies and Irish builders, it wasn’t the migrant track – this really was new territory. 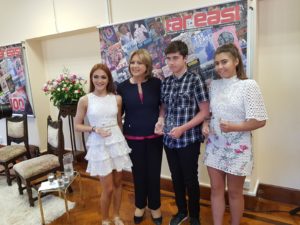 So, in that sense you might describe it as ‘mad’ but you might also describe it as really very courageous and demanding a lot of personal resilience. You think of the culture you had to adapt to, the food you had to adapt to, the attitudes, perceptions, distrust and you were going to be bringing the gospel that some of them had maybe never heard before – right into the heart of a world you didn’t know. You were coming from a place that they didn’t know and they couldn’t distinguish between you and the imperialists – that was a lot of work to be doing. 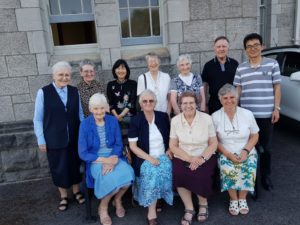 We were kind of fortunate at that time in Ireland that we had this excess not just of missionary zeal but of young men and women who were prepared to make clerical life and religious life their lives. We had more priests than we knew what to do with – isn’t that extraordinary.

What took some of them abroad was that question put to them – ‘your bishop doesn’t need you at home at the moment – could you find something else to be doing or would you go somewhere that has a need’. They looked around the world to see where that need was and that is where they brought it to. 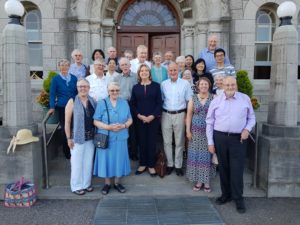 I think the story of the Irish missionaries is something that helped us as children to relate to the outside world. First of all, it gave us a conscience and a sensitivity to people who were poorer than us – people who had so little. We knew that our missionaries, whether it was our Sisters, our priests or whether it was our brothers or our lay people who were going around the world, they were implanting themselves mostly into the lives of people who were poor and they were doing so in order to help the poor out of poverty and into opportunity. At the same time, they were doing it out of Christian love and as a way of introducing people to the Gospel.

I was part of that fortunate post Second World War generation – to have in my immediate orbit – a member of family was a part of this great clan: God rest his soul – Fr John Joe McGreevey – who is buried just outside here [in the cemetery in Dalgan Park.] 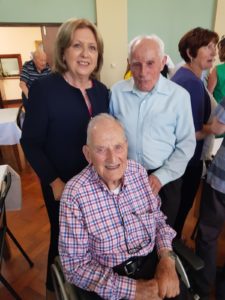 And ours was a house that priests would call into and missionary priests, when they were home, would call to. So, in our own way, we were citizens of the world, and our missionaries helped us to be citizens of the world with a sense of sisterhood and brotherhood for people that we would never meet, people who were always going to be strangers to us but that we fundraised for at home in Ireland and whose lives we felt in some way connected to thanks to the missionaries.

Question – Did we fully internalise the missionary message? In a way it grew as a church apart. A lot of the Irish missionaries had a very different experience to priests and nuns living in Ireland and over time some of them became very alienated from Ireland. They found Ireland caught up in issues that they perhaps couldn’t relate to. In the modern era they were bringing home more radical messages on social justice – liberation theology never really took hold in Ireland.

Mary McAleese Answer – Ireland and mission territories were always going to be linked through our people but they were separate spheres of development and Ireland’s development took off in one direction and at a different pace from some of the places that our missionaries had to work in and had to endure in really very difficult circumstances in. 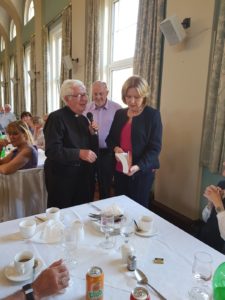 One of my biggest memories of Fr John Joe is of him coming to Belfast where another cousin of his and I took him around Belfast. Fr John Joe as you know had about one suit for about 50 years – I am not exaggerating – it was probably the suit he was buried in….

We took him to Belfast during the Troubles. He had a lot of family living in Belfast and he was interested to find out what it was like. He had heard about these places like the Falls Road and Ballymurphy that were very poor. So, we took him around the poor housing estates in Belfast and he absolutely excoriated us for daring to call them poor. He said ‘you don’t know poor – you have no idea of what poor is’. He would point out things like satellite dishes on the front of the houses and cars in the front gardens.

It brought home to me the relativities of our experiences. We were lucky that we had him to balance ours but also, I think, he was lucky that he had us to try and balance his to some extent. There can be a disconnect and certainly we needed a fair degree of patience with each other. 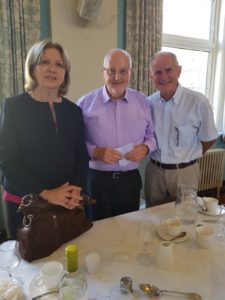 I have a great missionary friend, not a Columban, from a different missionary order. I remember him coming home from West Africa to retire; he was into his 70s. After about eight months, he said to me, ‘I can’t stand this country – I am getting out of it!’ He just couldn’t be doing with this Ireland. He felt that at every hand’s turn there was stuff happening that he didn’t understand.

So, he went back and rather regretfully he stuck it out there for another few years. But like everything else old age eventually caught up with him and he had to come home. So, he is very grumppled currently. Going on 90 now, trying to adapt to an Ireland that he left. When I think of it – he left that Ireland over 50 years ago and when we think of the changes that have happened here… the changes are colossal.

I live on a small farm in Co Roscommon. We don’t actually farm it. My grandparents lived straight across from us and so did Fr John Joe. I often say that I would love to have my granny back just for one day, I would love to her to see what a house is like with a washing machine and a sewing machine and a dishwasher and a toaster because she lived in a small cottage with a dirt floor, she cooked everything on the open fire and she never had running water. She never had an inside or an outside toilet …

That was her life. I know it was the last millennium and the last century but actually it is still within touching distance for many of us. So, the pace of change in Ireland has been colossal. I still remember rural electrification coming down that road where my grandparents lived and where my cousin now lives in that little house. 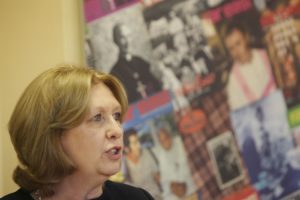 My grandfather, sometime in the 1950s, he would not have the electric. He said it was the devil’s own cursed instrument and it would never catch on!

He was a subsistence farmer, he didn’t have an income. He couldn’t get his head around how you would pay a monthly bill when you didn’t have a monthly income. He was part of that transition generation from a subsistence income to a regular paid income. He didn’t know how it was going to happen. So, I think he was frightened of bills. So many of the young men who left Ireland and the young women who left Ireland [and became missionaries] that was the world they left – that is what Fr John Joe left.

Many of them went away as young men and those are the kind of houses they left. Then they come back to their nephews and nieces who are all driving SUVs or have the live-in nanny or the 3,000-square foot house with every electrical gadget imaginable and they all have professions, and the women are working and they are highly educated, and they are also very confident and interrogative – so yes, it is a different Ireland.”