Writing in the September/October 2017 issue of the Far East magazine, Columban missionary, Fr Donal O’Keeffe looks at how the various faith traditions in Korea have worked together to the common good.

Some time ago I came across the following reflection about missionaries. ‘Missionaries believed they were going out to tell people about God but it was actually God inviting them to go and see God’s diverse works in other places’. It sums up my 40 years’ experience in Korea. The longer I live in this country, where Christianity is the new comer, the more I wonder at “the marvellous Works the Lord has done” (Ps 118:23). Diversity is the word that encapsulates it.

In terms of the great traditions Korea has been heavily influenced by Shamanism, Buddhism and Confucianism for thousands of years and, more recently, during the last 250 years by Christianity. Historically, at different times, there were tensions between the traditions but today the relationship is harmonious and one can clearly see the influences of each in Korean culture.

These different traditions seek to help their followers clarify and deepen their insights into the Mystery that is Life and the invitation which Life extends to each of us. In Korea today people of different religious persuasions and none, work together for a myriad of life-giving causes. The dialogue and sharing among them gives rise to challenges which lead each community to ask deeper questions about their own tradition, resulting in new insights. 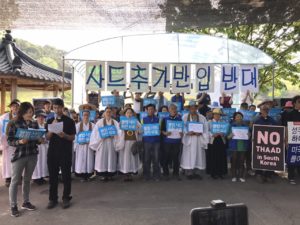 A case in point would be the recent pan-religious campaign to stop the building of a naval base on Jeju Island. On the shorefront, a rock formation named ‘Gurumbee’ was being blasted and covered with concrete to create an artificial harbour. Regarded in Shamanism as a ‘sacred place’ by islanders, it became the focus of the peace protests. On Easter 2014, Bishop Kang of Jeju spoke of ‘Gurumbee’ as Golgotha where the Message of Peace was proclaimed by the Risen One, that sealing the tomb with concrete would never block the breath of Peace ignited by God.

Columban missionaries, with our unique contribution coming from different cultures, add to the diversity and consequently all involved are enriched. For me over the years, this has involved working with factory workers, living in a poor area where the focus was providing affordable housing, working with Korean Columban missionary candidates and our benefactors. At any one time the work has been about searching together with a specific group of people for the meaning of the Kingdom at that particular time and place. I find that exciting and life-giving. 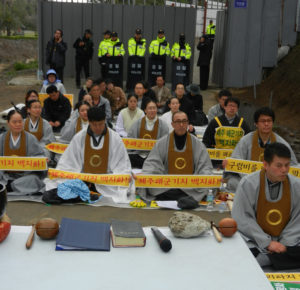 “You like Korea but have you not thought of coming home?” is a question I sometimes get. As yet, I have not thought deeply of returning home but if I did I think it would be to become involved with the diverse new groups springing up throughout Ireland amd Britain, to search with them for the meaning of the Kingdom at this new moment in our history: “Look I am doing a new thing, now it springs forth. Do you not see it?” (Is 43:19).