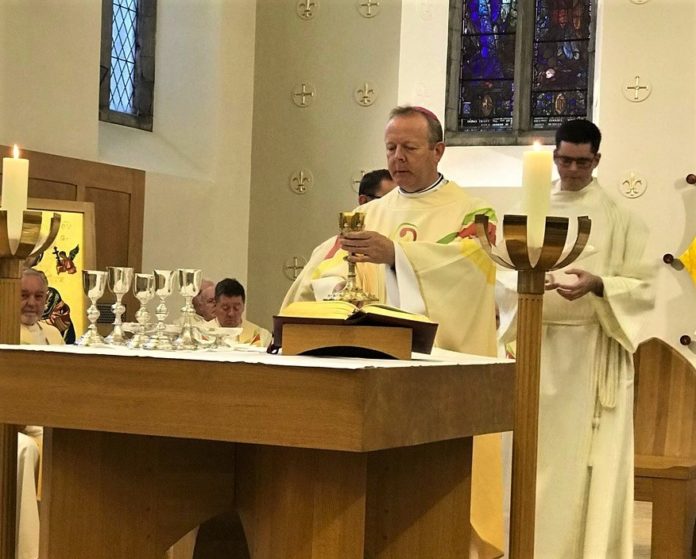 Opening the Irish Church’s Extraordinary Month of Mission in Maynooth on Tuesday evening, the Primate of All Ireland, Archbishop Eamon Martin paid tribute to the Columbans and their patron St Columbanus.

Archbishop Martin led the bishops in a concelebrated Mass in St Patrick’s College, Maynooth to mark the opening of the month of mission to which Pope Francis has given the theme ‘Baptised and Sent’.

Speaking about the context in Ireland in which the Extraordinary Month of Mission is taking place, Dr Martin said that “more and more we are speaking of ‘mission’ in the Church, rather than ‘maintenance’.”

It is time for the Irish Church to “revive our missionary genes”.

He admitted that he had once thought of being a missionary priest as two of his mother’s cousins were missionaries – one a Columban, who worked in the Philippines and Fiji, the other a Salesian, who taught in Argentina and Ecuador, while his father’s cousin still works as an Irish missionary brother in South America. 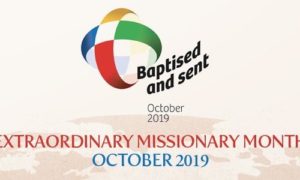 “Although I opted for diocesan priesthood at home, I have come to realise more and more that all Christian vocations are missionary by nature and I find that thought to be challenging, exciting and immensely fulfilling.”

This challenge is one that the Church in Ireland can welcome – to rekindle the joy of the Gospel in our country; to find again the youth and courage that inspired St Columbanus and the great Irish missionaries of ancient times; to rediscover the adventure and excitement of the founders of the Irish missionary movements in more recent centuries.

So many of our people, especially our young people are longing for meaning, purpose, hope and values that will last; they are not finding these in the shallow and empty promises of life without Christ.  Ireland, and much of Europe, has again become that new continent to be won for Christ.

Archbishop Martin explained the symbolism of the logo of the Extraordinary Missionary Month, which incorporates a missionary cross. Its primary colours refer to the five continents: red for America, green for Africa, white for Europe, yellow for Asia and blue for Oceania.

“White was chosen for Europe because it is the symbol of joy, and the beginning of a new life in Christ: it suggests that Europe faces a challenge to find new life and joy in Christ, to regain the evangelizing strength from which it was generated.”

Referring to the theme which Pope Francis has chosen for the extraordinary month of mission – ‘baptised and sent’, Archbishop Martin said the Pope clearly wants to rekindle in every baptised person that sense that we are all called to mission, to witness, to teach, to win others for Christ.

He highlighted that the Pope is inviting the faithful to reflect this month on four themes:

On Tuesday, Archbishop Martin also urged dioceses, congregations and especially young people in Ireland to support the ‘Laudato Tree’ project which is being sponsored by the Society of African Missions. 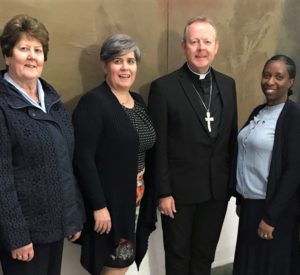 Taking its inspiration from Pope St John Paul II’s appeal for the Sahel in 1980, and Pope Francis’ 2015 encyclical Laudato Si, the project encourages concrete action – the planting of trees and increasing biodiversity both in Ireland and along Africa’s ‘Great Green Wall’, together with awareness raising and education about faith and the environment.

“The Laudato Tree project invites us to educate ourselves from a faith perspective about the impact of climate change on some of the poorest peoples of the world, and to raise donations towards the planting a number of trees in Ireland and at the same time five times that number along the great green wall,” he explained.

Dr Martin said the project could especially catch the imagination of the young people of Ireland, in their youth groups, schools and colleges and workplaces.

“I hope also to embrace it in a cross-community way with my brother Church of Ireland Archbishop Richard Clarke and with some of our young people; the project opens up an opportunity for us to address the climate crisis from a faith perspective, rooted in our love of God the Creator, the dignity of the human person, while calling us personally to responsible simplicity of life and ecological conversion; it kindles a missionary charity in solidarity towards those most vulnerable people of the world who are disproportionately affected, and it symbolises new life, new growth, hope for the future and love of God by caring for God’s creation.”

It is estimated that by 2020, 60 million people from sub-Saharan Africa will have migrated because of desertification caused by climate breakdown.

The African nations in the sub-Saharan Sahel region have come together to plant a wall of trees, 8,000km long and 15km wide, with the aim of restoring land which is being lost to desertification.

As part of the SMA’s commitment to the people of Africa, and to engaging in a positive and creative way to caring for the earth, our common home, they are appealing to people to assist with the planting of the ‘great green wall’ of trees across Africa.

God our Father, when your Son Jesus Christ rose from the dead, he commissioned his followers to ‘go and make disciples of all nations’.

Through our Baptism you send us out to continue this mission among all peoples.

Empower us by the gifts of the Holy Spirit to be courageous and enthusiastic in bearing witness to the Gospel, so that the mission entrusted to us, which is still far from completion, may bring life and light to the world.

May all peoples experience the saving love and generous mercy of Jesus Christ, who lives and reigns with you in the unity of the Holy Spirit, one God, forever and ever.