The recent months here in Dalgan, have not been easy with so many deaths, three in the past week alone, Frank Mannion, Colm Murphy and now David. Irrespective of age, when somebody dies in the Community, it leaves a huge void and sadness.

Last Tuesday evening, we gathered here in this Chapel, to bid our farewells to Colm Murphy, a great friend of David’s. Both had left together on the 4th October 1958 bound for Burma (Myanmar) on their mission assignment. They were both assigned to Bhamo, (Banmaw). At the time it was part of the diocese of Myitkyina. 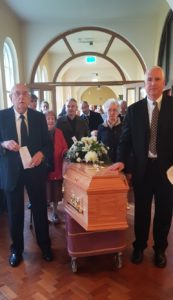 At the removal of Colm, David was present with us. He sat in his wheelchair, over near the organ. A few hours later, he felt unwell and was taken to Our Lady’s Hospital in Navan. His condition deteriorated during the night.

For the next few days he struggled with breathing difficulties. It was very timely that Joan and Mary arrived on Thursday afternoon. To the best of my knowledge, even though heavily sedated, he was aware of their presence. During the early hours of Friday morning his condition worsened. It was so good that you Mary, together with Fr Gerry Neylon, were present with him, when the Lord called him home at around 6.25am on Friday morning.

While he was a great age, his death did come as a great shock to all of us here in Dalgan, as I am sure it did to you his family.

The Burning in Dromcollogher

I have no doubt, but you have been sharing many memories of David over the past few days. On 5 September 1926, a terrible tragedy struck the town of Domcollogher at Brennan’s Hall. It has always been referred to as ‘The Burning’.

A large crowd of people had gathered to watch a movie upstairs when fire broke out. 48 people lost their lives on that night as a result of the fire, something like the Stardust tragedy of some years ago.

This was a devastating blow for such a small village and a closeknit community. David always tells the story that he was present that night though he was not yet born. His parents were present and were very lucky to escape. His mother, Margaret, was pregnant at the time with David. It must have been a terribly frightening experience.

David never lost his great love for Dromcollogher, where he loved to visit. I still picture him waiting at the bus stop across the road to catch a bus to Dublin and the train to Charleville and then on to Dromcollogher. He was very friendly with the late Bishop Jeremiah Newman, Bishop of Limerick. Both families lived a few doors from each other.

David was a very easy person to get along with, not only in Dromcollogher, but also during his student days here in Dalgan and his time in Burma and Peru. He was a thorough gentleman. This has been very much echoed over the past few days by many of the staff in the Retirement Home who were so attentive and took such good care of him.

Joan and Mary told me that he used to play the piano and the violin. Joan also said that as children, she had to fend for herself as the three eldest were David, Tom and James. David often came to her rescue as I am sure he did on many occasions for many people during his years in Myanmar and Peru.

David was not only a proud Dromcollogher man but also a proud Limerick person. Nothing gave him more pleasure than when Limerick won the All Ireland Hurling Final in 2018 after a lapse of 45 years. When I visited him in his room after the match his eyes lit up and he said to me, ‘Thank God I have lived to see this day. I hope we don’t have to wait another 45 years.’

Even though David spent far more years in Peru than he did in Myanmar (Burma) he never lost his great love for Myanmar especially Bhamo where he was stationed for eight years as headmaster of St Columban’s High School.

David and Colm Murphy arrived in Bhamo on the same day in 1958. As I mentioned in my Homily for Colm Murphy, the main focus of the school was the development of the student from a cultural, educational and social point of view, particularly the Kachins who came from the mountain area.

Like David, they were a very honest and straightforward people. David greatly respected their wisdom and honesty.  It gave him great pleasure to make a return visit to Bhamo. Even though the school has long been nationalised David’s photo is still there.

This year I had the privilege of visiting Bhamo. One of the first questions Bishop Raymond asked me was, how are David Wall and Colm Murphy? Little did we think that they would die within days of each other. It is so fitting that their graves in the Community Cemetery here in Dalgan are in front of each other as if both are minding and watching over each other. The situation in Myanmar at the time was not easy.

Both David and Colm had to leave Myanmar in 1966. The Columban Sisters in Hong Kong used to send packages to Myanmar at the time. Not so long ago, Sister Anne Salmon from Magheramore, happened to visit Fr David here in Dalgan and he said to her, your kindness in sending those packages kept us alive.

Even though many years have elapsed since Fr David, Fr Colm and others left Myanmar they are still fondly remembered. Yesterday I had an e-mail from Bishop Raymond of Banmaw (Bhamo).

He writes: ‘Once again I am so sad to hear the news of the death of Fr David Wall. My deepest sympathy and condolence to all the Columbans and to his family on the deaths of Fr David and Fr Colm. Their deaths are a big loss to all us here in Bhamo. With their deaths the last link with that great group of Columbans has been broken. They had a profound influence here in Banmaw.’

‘Today I have asked all the priests of the diocese to offer Mass with the people in the parishes for both Frs David and Colm. My vivid memory goes back to my visit to Dalgan in 2015 when I had the pleasure of visiting Dalgan and meeting both of them. I treasure the photo that you took of the three of us together. May God give them both eternal rest’.

Fr David spent more than thirty years in Lima in Peru, three years prior to getting his visa for Burma, and from 1967 until 2007 when he retired back to Ireland on reaching his 80th birthday. Recently I had the pleasure of spending over three weeks in Lima. I had the opportunity of seeing the different places where Fr David ministered.

Lima is at the foot of the Andes and is surrounded by severe looking hills, chocolate brown in colour with hardly a blade of grass to be seen. The people, who for the most part, are very poor materially, had built their homes on the side of the very steep hills.

This continues today as people flock to the city. Fr David, in his little Volkswagen car and on foot visited the people very regularly and was greatly loved by them. Sr Mary Mulcachy, Columban Sister, who spent many years in Peru worked with David.

She said that he was a real gentleman. He was a wonderful priest and never said a bad word about anybody. The people loved him, and he had a great respect for them and their culture. He won the trust of the people and many confided in him knowing that any of their problems would be held in strict confidence. He was very compassionate and one of his many gifts was visiting the sick.

He was very down to earth with the people and very humble. He was a man of deep faith and prayer. He was very thorough and meticulous in everything he did. When he handed the parish over to the local diocese, he had everything in order, records and finances. David took great delight in showing his sister Mary around when she visited Peru.

David, a highly educated person, continued to follow events in Burma/Myanmar and in Peru, and never ceased to be a reader of all literature relevant to both places.

Message of sympathy from Pakistan

Dan O Connor sent the following message of sympathy on behalf of the Columbans in Pakistan: ‘Our deepest sympathies to all in Dalgan and to his family. I remember having some good talks with him. He had an engaging and captivating smile. We believe that he now has an extra fulness to that smile in the presence of God whom he served so well’.

David was a person with a deep faith and had a very close relationship with God. I selected the Emmaus story as the Scripture reading as I feel that it is one that would have appealed to both David and Colm. The death of Jesus had shattered their dreams. Then Jesus appeared to them. The first thing he does is to open their minds to understand that his death, far from being the end of the dream, was the very means by which it was fulfilled.

He opens their eyes and they recognised him in the breaking of bread. It was this experience of the presence of the risen Jesus that helped them to pick up the pieces. David had a great devotion to the celebration of the Eucharist. Together, with Colm, he helped so many people during his long and fruitful ministry to pick up the pieces when the going was difficult. May we all find through this scripture passage that death is not the end but the beginning of a new life with the risen Lord.

Tonight, on the feast of the Apostles, Simon and Jude, we hand David back to God the source of life. We give thanks to God for the many ways that this gentle servant enriched the lives of so many people in Myanmar, Peru, Dromcollogher and Ireland.

May we continue to hold dear the Christian values by which he lived and with which he shared with so many people. We thank you the Wall family for gifting him to the Missionary Society of St Columban. We will miss his gentle presence amongst us here in Dalgan.

PS: In a little booklet, West Limerick and 1916, a personal account of events, by his father, Charles Wall, Fr David writes in the Foreword: ‘Great progress has been made since then towards reconciliation. It is for us to build on what has been achieved and continue to make peace and reconciliation one of our fundamental aims both personal and national’. This is how David lived his life.