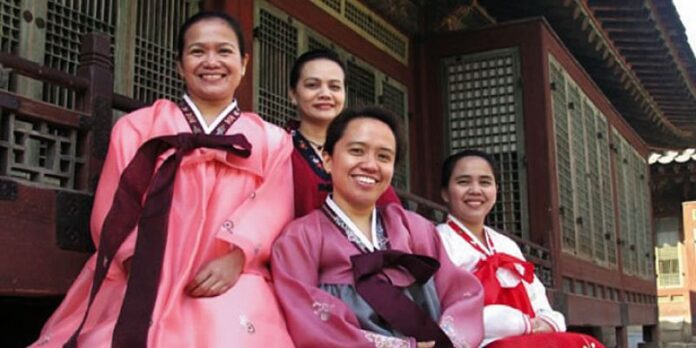 Every day in our lives we meet people of various ages from different backgrounds. Many of them we don’t know but some of them we get to know and interact with. Sometimes certain people, whether we know then personally or not, have an impact on our life.

I will never forget a neighbour I had in Korea back in 2003. Her name is now blurred from my memory, but her face and what she did for me found a permanent place in my heart. I was new to the area, and the only foreigner residing there at that time.

The apartment I lived in was located midway between the basement and the ground floor; while my neighbour’s room was located at the back of mine. It was wintertime. On the first morning just after my arrival, at around 6am, while I was still in bed, somebody knocked hard on my door. It was a knock that seemed urgent, but later I realised it was meant to wake me up. I opened the door. And there she stood.

Without uttering a word, she beckoned me and invited me to have breakfast with her. It was still dark and cold outside so I put on some warm clothes and followed her.

It was dark in her room. There was only a small night light plugged into the socket. We sat on the floor eating boiled cabbage, boiled potato and kimchi for breakfast, just the two of us. No words were spoken, except when I said ‘thank you’ in appreciation for what she had done.

Her gestures of generosity, thoughtfulness and kindness will forever be etched in my heart with gratitude. Here was a simple old woman, with almost nothing in her room, sharing with me all she had, welcoming a stranger with love. She had shown me what mission is really all about.

There are many people who, by their works, words and by simply being, have given voice to those who have nothing – especially the poor, those on the margins, and creation itself. They inspire those who are in need. They give hope to peoples and nations and inspire many to continue to share the love and goodness of God by working for justice, peace, dignity of life and integrity of creation. My neighbour shared with me the goodness of God and gave dignity to the stranger she saw in me.

We honour these people who have given so much from what they have. Others have been abused or ill-treated for the sake of the Gospel, while some have been killed for standing up for what they believed in. There are also those who generously and selflessly help out in whatever way they can so that the mission Jesus started will continue to flourish.

It is my hope and prayer that the efforts and lives of these courageous people will not fade into oblivion but will spark a light in our troubled times and awaken our consciousness to the great work of loving life in all its forms amidst all the world’s difficulties and challenges. And that we do this with joy and gratitude to God who is love and life itself. • 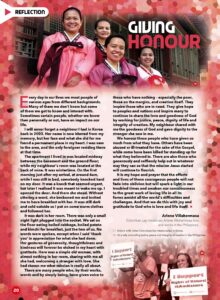 This article was published in the May/June 2022 issue of the Far East magazine.

You can subscribe online here and support the work of our missionaries: https://columbans.ie/product/far-east-magazine-yearly-subscription/