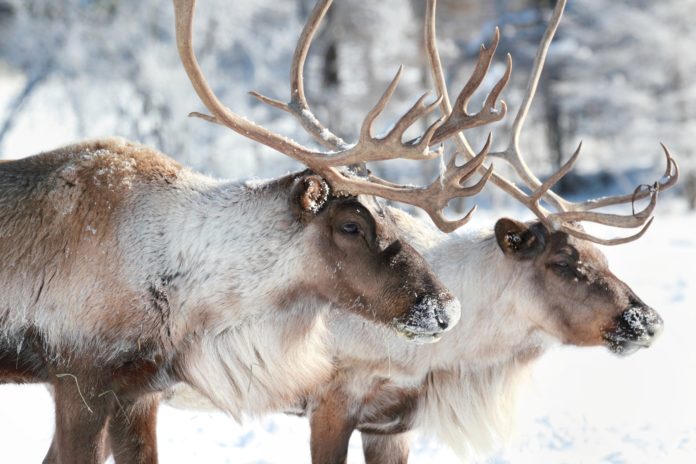 Christmas will soon be upon us with its magical images of Santa, his flying reindeer including Rudolf with his famous red nose. How exciting it is. This is a good time to look at some of the wonders of the remarkable reindeer who feature so prominently during the festive season.

Reindeer are well-adapted to living in extremely cold regions in the Arctic Circle. Their amazing coats have two layers. A soft woolly under-layer lies next to their skin and an outer layer of hollow, air-filled hairs keep the reindeer toasty warm in the frigid, windy temperatures of the tundra.

Each year they travel vast distances, crossing both rivers and lakes, in search of their favourite food which is reindeer moss. This migration can be 5,000 km (3,100 miles) and is one of the largest migrations of any terrestrial animal. Reindeer babies, called calves, are born in early summer and have the ability to run with the herd almost from the moment they are born. If we humans were to do this, it would be the same as a new-born baby jumping out of its cot and taking off at a fast sprint.

A reindeer’s nose also plays an important part in its survival. Since they live in areas where food often hides under the snow, they rely on a super sense of smell to find their dinner. Maybe this is why Rudolf is immortalised for his very shiny nose.

Scientists have still not figured out how Santa’s reindeer are able to fly. They have done many tests and experiments to no avail. It does not really matter as we all believe in miracles and at Christmas there are many, such as the Star of Bethlehem, the new born Christ child and of course the remarkable reindeer.