Fr Rat Raleigh recalls Fr Michael Sinnott as “A gentle and humble Columban Missionary who endeared himself to the poor and those who didn’t have a voice.” He reports on Fr Michael’s funeral which took place in Dalgan, on Wednesday 27th November 2019.

The Dalgan Chapel was full for Michael’s funeral Mass. Many people had travelled long distances to be present to show their appreciation for Michael and his very dedicated service over many years as a Columban. The presence of such a large crowd was also very consoling for his family who were very close to Michael and he to them.

The presence of so many Columban and Loreto Sisters was very much appreciated. Michael’s late sister, Sr Josephine, was a Loreto Sister. Columban Sisters Anne Breen, Ita Hannaway, Margaret Murphy, Bernadette Dolan and Maura Gallahue (from Wexford) would have known Michael well from their time in Mindanao.

It was also lovely to see a number of Filipinos from Pagadian. Michael would have been very pleased.

A number of priests from the diocese of Ferns were also present. For the burial we were blessed with lovely mild weather. The sun even made an appearance. 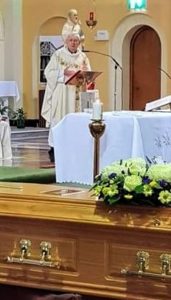 His great friend, Dan O’Malley, was the main celebrant and homilist. Michael and Dan lived together in Pagadian for many years. It was from outside the Convento in Pagadian that he was kidnapped just over ten years ago. He spent 31 days in captivity in very confined and uncomfortable conditions.

Dan welcomed everybody and especially his family. He paid special mention of Michael’s two sisters who were unable to be present because of illness. A number of symbolic gifts were brought to the altar which gave an insight into the person he was.

To symbolise his deep faith, his Breviary and Rosary beads were presented. Included also among the gifts were the Irish and Filipino flags, a rugby ball and the Wexford jersey depicting his great love for all sports.

Dan said he spent over ten years living with Michael and it was a very happy time in spite of the many difficulties because of the tense political situation. Michael was a person who lived a very simple lifestyle.

When he was Rector in Dalgan he was at pains to point out to the students that they were a privileged group and how important it was to properly use the resources that were generously given by donors, many of whom made great sacrifices to support the missionary work of the Columbans.

They lived through very difficult political times when many people disappeared and were murdered. There were times when one’s faith was tested because of the terrible atrocities and the way people were mistreated. 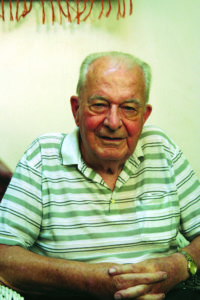 During one of the monthly reflection meetings among the priests, Michael asked the question, what hope have the people? Maybe he began to doubt his own effectiveness?

A few years later Dan was able to point out to Michael that while he might not have had the answers, that he Michael, was the hope of the people. He listened to them and greatly respected them and accompanied them. Michael cried at the way the poor were treated.

Michael’s greatest fulfilment was in setting up a School and Centre for children with disabilities, who were not always socially accepted and were often frowned on. He was able to break down many of the taboos that people associated with disabilities.

The Centre, Hangop Kabataan, a refuge of hope, has made a huge difference to people. These people were very special to Michael. Dan said that Michael was one great Columban who lived life to the full and whose main focus was always to be at the service of the poor and underdog. 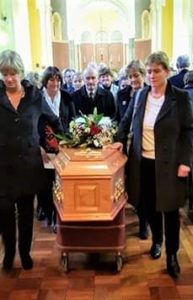 Dan ended by thanking Michael for his generosity and his faithfulness. We now hand him over to God. May he now enjoy this new life with a gracious God.

Before the final commendation, Ray Husband, Regional Director, described as a humble priest who never wanted to draw attention to himself. He was a very kind person. While everyone was shocked at the suddenness of his death, he was a person prepared to go to God.

Charlie Meagher, who would have known Michael well in Mindanao, conducted the prayers at the graveside. After the singing of the Salve Regina, Johnny Farrell, played on his mouth organ, ‘A Time to Remember’.

A lovely lunch was served after the burial which was greatly appreciated by all. What was very significant was the number of young people who were present. We shall greatly miss Michael’s gentle presence among us here in Dalgan as will his family and his many friends in the Philippines, especially in Pagadian at the Hagop Kabataan Centre. Thank you, Michael.