Home Resources The Quad Gardens of Dalgan by Elizabeth McArdle

The Quad Gardens of Dalgan by Elizabeth McArdle 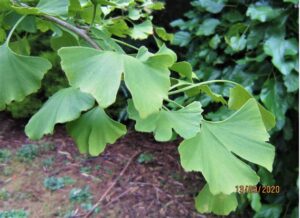 St Columban’s, Dalgan Park was built in 1938 and is located on lands once ruled by the high kings of Ireland from nearby Tara. Its construction was loosely based on the model of a cloistered medieval monastery. In bygone days, covered outdoor walkways enabled monks to walk and pray when the weather was inclement. These walkways would overlook cultivated, external gardens.

Today in Dalgan, these walkways or corridors, overlooking the external gardens, known as the Quad Gardens, are now indoors. Nevertheless, they still serve the same purpose as those of medieval monasteries by allowing the Columban priests to walk and pray during spells of bad weather while still having a connection to the outdoors.

The Quad Gardens
The Quad Gardens, which will be discussed here are situated, one to the Southeast of Dalgan and the other to the Southwest. Dalgan Chapel bisects the quadrangle, hence creating the two gardens. They are surrounded by narrow tarmac paths and up to the year 2000, these outdoor spaces were regularly mown and maintained as lawns.

Background to the rejuvenation of the Quad Gardens
A working group was set up by several Columbans and staff to enhance the long corridors which transect the entire building of Dalgan. It was considered by some that they were austere and unadorned. The plan was to embellish the side corridors, including the Cloister Corridor with house plants, ethically sensitive artworks, and artefacts from the mission fields. The latter were placed in large glass cabinets along the corridors for safekeeping. When work on the corridors was completed, it was suggested that the quad gardens, onto which the corridors looked, also required some rejuvenation.

In 2001, Mission Alive took place in the Royal Dublin Society (RDS). When the conference concluded, the plants and props which had adorned the Columban mission stands became available and were donated to Dalgan for the rejuvenation of the Quad Gardens. There were also donations of plants from The National Botanic Gardens, Dublin and from the Eco-warriors.

The proposed objective for the gardens was to create two peace gardens, and the planting scheme and sculptural artifacts from Mission alive would hopefully reflect this vision.

Access to the Gardens
The gardens are accessed from the front corridor of Dalgan via a wooden door directly in front of the main entrance. On entering this door, a small perpendicular corridor with three steps down on each side and two green doors at each end, provide access to the gardens.

Garden to the Southeast
On entering the Southeast Garden, a triad of cherry trees leads into the main area. On the eastern side, a gravel square, surrounded by sleepers has been incorporated into the mown grass and a large ceramic urn dominates this gravel space. The urn was crafted in Indonesia and symbolises the art and craft of Southeast Asia. Placed in front of this urn stands a small figure of an oriental water carrier.

Three pedestals have been placed on the grass to the left of the gravel. The first contains an ornamental sundial, the second a concrete plant pot and the third, which is made from marble, stands empty. These three items were donated from the Mission Alive display from the RDS.

Wild elder (Sambucus nigra) was not originally planted in the shrub bed and has grown from wild seed, most probably carried in by birds. At present it is dominating the planted area.

A small, curved shrub bed is situated at the corner of the chapel sacristy. The following shrubs are contained therein: hebe (Hebe speciosa), brunera spp and munstead lavender (Lavandula angustifolia).

Garden to the Southwest
On entering the southwest garden, a clipped topiary ball of woody honeysuckle is present (Lonicera nitidia) and leads the way into this garden.

In the north part of the garden, which runs along the Cloister Corridor, a wide bed of shrubs and trees is planted. This shrub bed curves down along the west wall of the chapel and where it ends, a sleeping Buddha has been placed under a Japanese maple (Acer japonica). This small area was designed to symbolizes a Zen Garden. The first Zen gardens were created in Japan in the sixth century. They are sacred places to aid the practice of meditation and prayer. 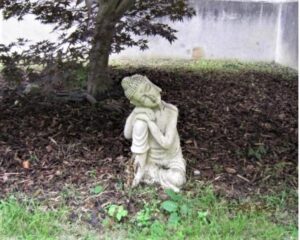 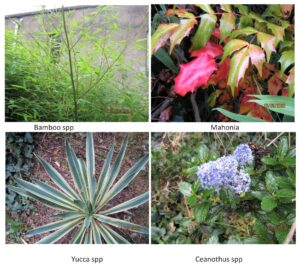 During the first few years of the project, two fountains with ponds were installed with timer switches which were lit up during wintertime. However, these have now been removed from both gardens and the ponds have been filled in.

In the shrub bed, it is interesting to note the presence of the Maidenhair tree (Ginkgo biloba). It is a native of China and is the sole survivor of an ancient group of trees which date back to before dinosaurs roamed the earth between 245 and 66 million years ago.

Known as a ‘living fossil’ it became extinct in China due to environmental factors but survived in Buddhist monasteries in the mountains of Japan where it was cultivated and tended by Buddist monks. In approximately 1100 AD, the tree was brought out of the mountains and is now widely planted all over the world.

Future Suggestions for the Dalgan Quad Gardens
The Quad Gardens, situated within the buildings of Dalgan, are delightful and unique spaces which deserve to be used and exploited to their fullest potential. Some recommendations which might achieve this have been listed below.

❖ For the good health of the Columbans, seating or meeting places could be incorporated into the Quad Gardens. It is proven that humans are all the better for spending time outdoors as it makes us calmer and is better for mental health. The fresh air is always beneficial and sitting outdoors is known to reduce isolation and loneliness as people feel more connected with the world around them.
❖ The Quad Gardens could become an outdoor social space for barbecues, entertaining visiting relatives and friends or as a meeting place for both Columbans and staff. Instead of being on the periphery (on the outside looking in) the gardens could be brought back into the heart of Dalgan.
❖ Since access to the gardens is limited for older people and in the absence of a handrail for the three steps, a temporary ramp and handrail might be installed to allow access for wheelchair users and those who find it hard to manage stairs.
❖ In the spirit of the cultivated medieval gardens, could it be suggested that low maintenance, small fruit trees such as apple, pear, plum etc. and fruit bushes, such as blackcurrant, redcurrant, gooseberry etc. be planted in the gardens for human consumption and for winter food for hungry birds.
❖ The Quad Gardens would be an ideal place to install nest boxes to provide homes for nesting birds in the spring and summer.
❖ Solar panels or photovoltaic panels could be installed in the gardens or on the church roof to reduce greenhouse gas emissions. In Laudato Si’, 23-26, Pope Francis advises us to discontinue our use of fossil fuels. The Intergovernmental Panel on Climate Change (IPCC) warns us that if we do not reduce our carbon emissions by 50% within the next ten years, adverse planetary changes will be irreversible.
❖ Since wild elder (Sambucus nigra) is taking over parts of the planted shrubbery in the southeast garden, it might be practical to remove it. On the other hand, it is a native tree and has a very high biodiversity value, (higher that the surrounding shrubs), so it might be better to leave it in situ.
❖ In Renaissance times, special spaces were intentionally created in gardens and were known as ‘The Bower of Saturn’. These were shaded, secluded areas, dedicated to the Roman God, Saturn. When people were feeling melancholy and wished to spend time alone, they went there to think and to be by themselves. This secluded space could be created by placing a single seat among the foliage in the southwest garden.
❖ Some larger species of trees which have been planted in these small gardens may cause problems in the future. Tree roots can sometimes grow far beyond the width of their canopies and lead to blockage of drains, subsidence, and structural damage. Regular monitoring by professional tree experts is advised.