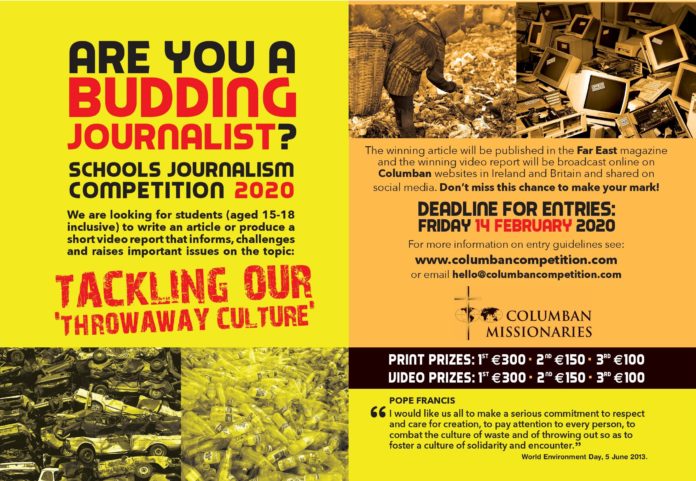 Berlind Fellermeier, a Columban Faith in Action Volunteer based in Birmingham, writes for Independent Catholic News about the theme of this year’s schools journalism competition.

For the past few years the Missionary Society of St Columban has run a Schools Journalism Competition in Ireland and in Britain. It has encouraged students between the ages of 15 and 18 to use their journalistic writing and mobile skills to look at a topical issue which is relevant to Catholic Social Teaching and resonates with Columban mission.

This year the Columbans have invited students to write an article or produce a short video that informs, challenges, and raises important issues around the topic of ‘Tackling our Throwaway Culture’. Entries will be judged on the quality of their presentation, knowledge of the subject, reporting depth, and Catholic Social Teaching on the theme.

The term ‘Throwaway Culture’ refers to society’s widespread consumption of single use items and is inclusive of many aspects of our lives, from plastic, clothes and food waste, to electronic and chemical disposal.

In 2015 Pope Francis wrote his encyclical, Laudato Si’: On Care for our Common Home, that challenges Catholics to think seriously about their lifestyles and the ways they can work together to protect the ‘Common Home’ that we live in – Planet Earth.

In it he writes: “It is my hope that our seminaries and houses of formation will provide an education in responsible simplicity of life, in grateful contemplation of God’s world, and in concern for the needs of the poor and the protection of the environment.”

Irish Columban Fr Liam O’Callaghan, who is on missionary outreach in Pakistan explains, “the environmental crisis is the context in which we live here, the ‘signs of the times’, and scores of people are sick and dying every day because of it.”

He runs workshops on sustainable living, care for the environment, and planting trees. The Columbans have drawn up a ‘Creation Covenant’ where they have outlined their commitment to care for the Earth and to combat the throwaway culture that is prevalent in today’s world.

In their covenant they write: “Our commitment to communion and our solidarity with the poor and with the exploited Earth challenges us as individuals to personal lifestyle change. As a Society we are called upon to use the resources entrusted to us for the life of the world.”

The Columbans want to encourage young people to think deeply about this issue, which is so relevant in today’s society. With the Extinction Rebellion movement, ‘Fridays for the Future’ and the crowning of Greta Thunberg as Time’s Person of the Year, the topic of Climate Change has been in the headlines regularly.

Over the past year there have also been protests outside of some of the world’s biggest retail stores highlighting the waste of “fast fashion” and objecting to the living and working conditions of the children and adults who produce the clothing.

Student journalists may also focus on marginalised groups of people such as the elderly, those who are homeless, or refugees. They too are part of the throwaway culture.

In his book ‘The Joy of the Gospel’, Pope Francis says: “Human beings are themselves considered consumer goods to be used and then discarded. We have created a “disposable” culture which is now spreading. It is no longer about exploitation and oppression, but something new.”

The subject of ‘Tackling our Throwaway Culture’ is broad and any students wishing to participate in the competition have a wide variety of topics to focus on. It is a chance for students to practice and demonstrate their linguistic skills along with their commitment to the issue.

The competition deadline is 14 February and first places – for writing and video – will be awarded €300 with second place taking €150 and third €100.