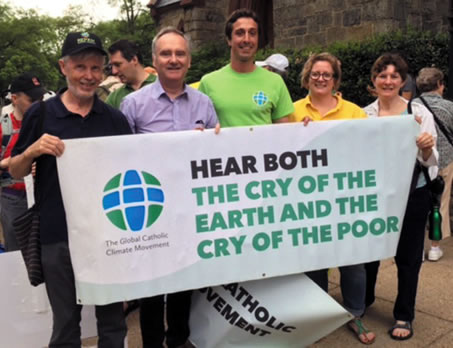 The Director of the Columban Centre for Advocacy and Outreach in Washington DC writes on theme ‘Signs of the Time: Responding to the cry of creation with hearts full of mercy’.

Ash Wednesday marks the beginning of Lent and preparation for Easter by calling us to a time of prayer, fasting and almsgiving. Christians around the world are offered a heart-felt plea to change from our merciful and compassionate God: “Return to me with your whole heart!” (Joel 2:12)

Given the dramatic state of the world today, with devastating wars and extreme weather events, a biblical exodus of refugees crossing borders and increasing numbers of people living in extreme poverty, the answer to the question, “Where is God speaking to us today?” is crucial.

Laudato Si’ offers us a way to see how the global economy and our individual consumption patterns contribute to the destruction of the environment and the devastating impact of climate change.

From fossil fuels for our energy needs, to cell phones and computers dependent on precious metals, to the food on our table produced and marketed by large agribusiness corporations, our daily lives are interconnected to the land and people from which those resources come.

Especially during this time of Lent, we are invited to look at creation as a gift of God, rather than a commodity to exploit and plunder for profit and demand, and to reflect on what we are doing to this precious gift upon which our very lives and the lives of future generations depends.

We have to begin to see the harm we are doing from a faith perspective as ‘sins’ and how our relationship with God, our neighbour and fellow creatures, and the earth are interconnected.

Last week I was at the US/Mexico border, visiting the Columban Mission Centre in El Paso. There I witnessed the drama of the thousands of Central American migrant families and refugees crossing the border each week, and heard how they have had to flee for their lives from the poverty and violence so endemic to their native lands.

Much of the devastation they experience is the bad fruit of civil wars and trade agreements that have favoured the interests of local elites or global corporations to exploit their lands and resources for profits over the needs and rights of the poor.

I think especially of the cry of indigenous and native peoples from Honduras and Guatemala, from where the majority of the migrant families had fled, and whose lives and cultures are being destroyed along with their sacred rivers and lands by mining corporations and other extractive industries.

Does not God speak in their cries of desperation, their tears of anguish? Do we hear them?

I think too of the drama of climate change across the world, with extreme weather events, devastating floods, severe droughts, rising sea levels, melting glaciers. Thousands of species are disappearing, never to return again, vulnerable communities and a fragile planet may not be so welcoming to future generations of our children.

We see this even in our own country, as devastating storms in Puerto Rico and Houston and wild-fires in California are destroying homes, and fossil fuel production and spills from oil pipelines are polluting our sacred lands and waters.

Does not God speak in the cry of the earth, yearning, like poor and indigenous communities, for redemption? Do we hear it?

One sign of hope and resurrection this year is a special Synod on the Amazon, called by Pope Francis, to be held in Rome later this year in October. In preparation for the Synod, the Pan-Amazonian Church Network (REPAM) will bring indigenous and church leaders to Georgetown University in Washington DC later in March for a conference on ‘Integral Ecology.’

One year ago, the Pope visited Puerto Maldonado, in the heartland of Peru’s Amazonian region, where global corporations and mining companies have threatened the life and land of the poor and indigenous peoples:

“You are a living memory of the mission that God has entrusted to us all: the protection of our common home,” Pope Francis told thousands of natives gathered at the indoor stadium of the city.

He denounced the illegal mining activities that have caused such abuse of the land and its people, as well as the slave labour and sexual abuse that has accompanied the exploitation of the mineral wealth.

Fr Peter Hughes, a Columban missionary in Peru for the past fifty years and one of the founding members of REPAM, expressed the hopes for the Synod this way:

“Pope Francis is calling for a profound change of direction. We must forsake an aggressive stance towards nature and replace it with respect, equilibrium and harmony …The Amazon Synod highlights the importance of the periphery as the new centre of God’s presence in history, and is committed to the search for a true Amazonian face for the Church, inspired by love for the indigenous people … It is an important moment for the voice of the Amazon and its people to be heard.”

The readings from Ash Wednesday invite us into a posture of humility and penance, fostered by prayer, fasting, and almsgiving. It is an ancient practice, but the goal is not only a clean heart, but a call to become people of mercy and compassion towards our common home and those whose lives are at risk.

But Lent is also a time of grace, a time to experience the joy of the Gospel and to journey together during this Lenten season as people of hope in the resurrection.