As we journey through Lent, may we continue to hold in a special way our Muslim sisters and brothers in New Zealand and around the world.

May this be an intentional time to build friendship and understanding that leads to mutual healing, unity, and peace.

We thank the General Council for sharing their message of solidarity with the Church and the Muslim community of NZ which was sent on March 16.

I share with you also the message from the Columban Centre for Christian-Muslim Relations in Australia as distributed by Pat McInerney. (See below)

This message comes to you from the Georgetown University as Peter Hughes (Peru), the CCAO team and I attend the pre-Synod on the Amazon conference.

One important action step that is emerging from this conference, impulsed by the call to territorialise the Amazon Synod process around the world, is the formation of an Asia-Pacific-Oceania Working Group as well as other regional working groups in Mesoamerica, Europe and North America.

This will be important spaces for us and I hope we can bring our Columban voice to these groups through your participation. We will follow up on this in more detail in the weeks ahead.

I also share with you a link to a story in National Catholic Reporter that speaks of the recent Divestment conference in Washington, DC that was cosponsored by Columbans and GCCM.

A word of thanks to Scott, Becca, and Wesley for their engagement in this conference.  I was among the speakers sharing our Columban divestment story.

Today we opened the last day of the conference with a reflection by Mary Evelyn Tucker, co-founder and director of the Forum on Religion and Ecology at Yale University. 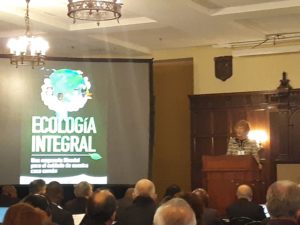 Without false sentimentality, Mary Evelyn spoke of a new hope that is blowing through the Church and world that is coming from the voices of indigenous peoples, of the earth and youth.

She spoke of a deep and shared longing, a yearning, and a new opening in the Church to humbly listen and learn from other cultures, other faiths, and the universe.

Mary Evelyn invited us to dip in to this longing as a way to find a new way to be in relationship that honours our ancestors, both human and non-human, as well as future generations of all life.

Discovering a doctrine of discovery in the Church is at the heart of conversion that will bring us in to contact of the Logos that dwells within all people and creation.

The remainder of day is dedicated to listening from the geographic working groups that imagined how the Synod on the Amazon can be territorialised throughout the world.

Today we are gathered at Georgetown University attending a conference, ‘Integral Ecology: A Synodal response from the Amazon Region and other Biomes and Essential Territories for the Care of Our Common Home.’

Among the participants we have representatives from every corner of the world with a strong presence of Cardinals and Bishops from the Global South. Following the See-Judge-Act process, the topics included:

Among his points, he said, “We need to recover a tenderness of caring, to appreciate the gifts from the Source, and to share those gifts. We need to feel when the people are hungry, I am hungry and when i am joyful I share my joy.”

Cardinal Bo in the day’s opening reflection made a powerful statement that we have “domesticated and buried Jesus yet again. We have to reconnect with the counter-cultural Christ and develop a green theology of liberation.”

He called us all to work for new heavens and a new earth with no more tears.”

To my Muslim sisters and brothers in Aotearoa New Zealand, Australia and around the world,

May the peace, mercy and blessings of God be upon you.

I am shocked and appalled at yesterday’s terrorist attacks at two mosques in Christchurch, where 49 worshippers performing Friday prayers were callously murdered, many more injured, and the survivors, respondents, and indeed the entire nation and peoples around the world were traumatised.

I stand in solidarity with you in your horror, grief and distress. I offer my prayers for the victims and extend my condolences to their families. I send my thoughts and my prayers to the injured and to all the individuals and communities who have been affected by this senseless violence.

I condemn Islamophobic, racist and extremist violence in all its forms. It is an offence to God, to believers of all faiths, to all people of good will, and to our common humanity.  I condemn also those who spread mis-information, suspicion and fear for their own purposes and create the toxic climate in which extremist violence takes root.

To Muslims I say, you are not “invaders” or “aliens”. You are not “other”. You are my sister and brother. You are family. You are citizens. You belong. You are an integral part of the fabric of our multicultural, multi-ethic, multi-lingual and multi-religious societies. We are one. The trauma you are now experiencing is not just ‘yours’ alone. It is “ours”, as it affects all of us together.

I join with Pope Francis who was “deeply saddened by such senseless acts of violence and assured all New Zealanders, and in particular the Muslim community, of his heartfelt solidarity.”

I join with the Catholic Bishops of Aotearoa New Zealand who wrote to the nation’s Muslim community, “We hold you in prayer ….  we wish you to be aware of our solidarity with you in the face of such violence.”

The Columban interfaith plan of action states, “we commit ourselves to work with people of other faiths and none to build up a fairer, better and peaceful world.”

May Muslims and Christians everywhere respond to the joint invitation by Pope Francis and the Grand Imam, Sheikh Ahmed al-Tayeb, to “all persons who have faith in God and faith in human fraternity, to unite and work together so that it may serve as a guide for future generations to advance a culture of mutual respect in the awareness of the great divine grace that makes all human beings brothers and sisters.” (Document on Human Fraternity for World Peace and Living Together, Abu Dhabi, 4 February 2019).

In these troubled times, when evil forces seek to divide us on the basis of race, colour, ethnicity or religion, may Muslims, Christians, people of all faiths, and all people of good will remain united in heart and mind and resolve.

May faith bind us in human solidarity, hope drive out fear, and love overcome hatred.