Home News St Columban: “more an eagle than a dove”

To mark the Feast day of St Columban – patron of the Columbans – we publish an extract of Sr Redempta Twomey’s 2015 talks for RTE Radio on this inspirational Irish missionary who died in Bobbio in 615.

In the Columban chapel in Dalgan, Co Meath there is a little statue of our patron. A little bird perches on his left shoulder, a dove perhaps, hinting at his name, Colum Ban, white dove. But any man less dove-like would be hard to find.

The centre of controversy in his own time, Columban, or Columbanus as he is often called, was far more an eagle than a dove.

Of course the most likely meaning is that the bird represents the Holy Spirit, inspiring this very austere and learned monk. And as if to confirm this he holds a book in his hand, undoubtedly the Sacred Scriptures. On the cover is written, in gold on blue, what may have been his motto and is in fact the motto of the Columban Sisters today: ‘Christi simus non nostri’ – ‘Let us be Christ’s and not our own’. November 23rd is his feastday.

Columban was born in the province of Leinster, in or about the year 543 and died in Bobbio in the north of Italy in 615. Centuries after his death this great missionary is remembered not only here but even more so in Europe where he preached the gospel and founded monasteries in France, Austria, Switzerland and Italy.

He studied at the monastic school in Cleenish Island in Co Fermanagh before moving on to the great monastery in Bangor on Belfast Lough. There he became a monk and later was ordained a priest. Columban was a brilliant student and despite – or maybe because of – the severity of the monastic Rule, he honed his talents.

As well as the scriptures, he studied literature and grammar, wrote exquisite Latin and composed poems. He has been called Ireland’s first man of letters, and, in the fullest sense of the word, Ireland’s first European. Pope Benedict XVI called him a father of Christian Europe.

His Abbott, Congall, did not want him to leave the monastery in Bangor but, in 591, Columban, with twelve companions, including his friend, Gaul, set off into the unknown. “It was my wish,” he wrote later, “to visit the pagan peoples and to have the gospel preached to them by us.”  So, like Abraham, he set out without a map, without a plan, with no back-up but with unshakable trust in God.

The little band crossed the sea in a small boat and eventually settled in the beautiful Vosges mountains where they built the famous monasteries of Annegray, Luxeuil and Fontaine. The local Franks were drawn by the austere life of the Irish monks who lived by the strict Rule of Bangor, marked by hours of prayer and fasting.

Columban drew up his own Rule, equally severe, but it seemed to attract rather than deter many young men to join his flourishing community. His vision inspired the founding of many monasteries in Europe.

A significant contribution he and his monks made was the introduction of the Irish system of private confession. Although the penances seem harsh to us, they were lenient in comparison to the severe punishments that they replaced. They opened people to the mercy of God, to his forgiveness.

Columban’s invitation, “Let Christ paint his image in you,” was heard by those who hungered for this compassion. Through him many were healed and found peace in their lives.

One could hardly be steeped in the psalms as Columban and his monks were, without experiencing over and again with radical amazement the beauty of creation. To paraphrase Ps8, “When I look at the heavens, the work of your hands, the moon and the stars that you have made… the beasts, birds of the air…fish of the sea – how great you are!”

Columban, mystic, monk and missionary was attuned to these harmonies. “If you wish to know the Creator, understand creation,” he said in one of his sermons. He spent long periods in fasting and contemplation in secluded places near his monasteries. “Let us turn to him,” he urged, “since the Triune God is present in each one of us.”

His deep respect for the Papacy did not prevent him from disputing the question of the date of Easter where the Celtic and Roman practice differed. Nor was he slow in urging the Pope to be vigilant and take action against the Arian heresy of his time.

His confrontation with the local bishops, whom he castigated for the laxity of clergy and laity, along with his fearless denunciation of the king and his court, alienated many of his listeners. Columban preached the gospel without compromise, urging people to examine their lives and be converted. For some, it was just too much.

After over 20 years of strenuous missionary work in Burgundy a broken-hearted Columban and his Irish monks were expelled from Luxeuil. They were taken to Nantes but a storm prevented their sailing to Ireland. The monks made their escape up the Rhine to Bergenz on Lake Constance and then this elderly but dynamic missionary walked over the Alps to Milan before finally reaching Bobbio where he made his last foundation.

Columban missionary Sr Redempta Twomey was Assistant Editor of the Far East magazine from 1977 to 2020. Prior to that she served on mission in Hong Kong. On 27 February 2020 she returned home to God. 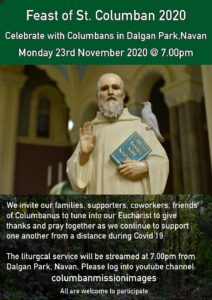 We invite our families, supporters, co-workers, friends of Columbanus to tune into our Eucharist to give thanks and pray together as we continue to support one another from a distance during the Covid-19 pandemic.

The liturgcal service will be streamed at 7pm from Dalgan Park, Navan. Please log into youtube channel: columbanmissionimages

All are welcome to participate