A few months ago, I was fortunate to make my second pilgrimage to Bobbio, the place in Italy where St Columban established his last monastery; it was also his final resting place. Fourteen hundred years later, his memory is still very much alive today in this ancient Italian town. Bobbio is the final destination of the Turas Columbanus or Columban Way, a pilgrim route which begins in Ireland in Bunclody, Co Wexford, and continues across Mount Leinster and Myshall, Co Carlow and up through the midlands to Cleenish Island in Co Fermanagh and on to Bangor, Co Down. 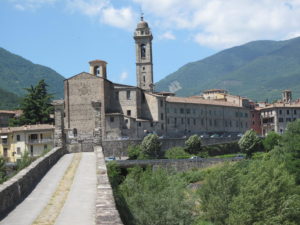 A group of ten pilgrims made this particular pilgrimage to Bobbio, some meeting for the first time, others ‘passing acquaintances’, while some of us already shared a deep friendship with one another. We spent four days together, at the end of which, I felt we were very much a community of faith and had realised some of the goals of the Columban Way “to celebrate our unity in diversity as we embrace the stranger and create the conditions for peoples from other cultures and religious traditions to make their home among us.”

For me, this was particularly evident the day we made our way to the cave to which St Columban, during his time in the monastery in Bobbio, would frequently retire to spend time in solitude and prayer. Our journey began with a drive up to the village of Coli, high in the hills above Bobbio – a drive which involved a series of hair pin bends not too unlike the road up to Mount Leinster, near to which St Columban was born. From the village, we proceeded to walk to the cave in a direction which Columban himself may have walked. We had already agreed that each of us would walk as far as we felt comfortable, so at two different ‘resting places’ some of our number returned to the village. “Isn’t this,” I thought to myself, “so very like life – where we accompany one another on the journey, expressing our concern and support for one another and accepting our different capabilities and needs?” 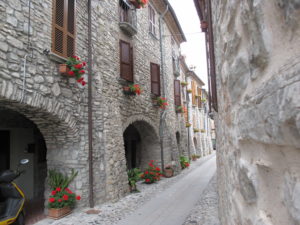 Finally, five of us were left to face the final part of the ascent to the cave. Climbing up to this cave is certainly not for the fainthearted as much of the surrounding areas have suffered from landslides and soil erosion over the years. The only approach to the cave now is over a very narrow muddy path. All that prevented us from slipping down the steep slope was a firm grip on a series of ropes hammered into the rockface and some, not too secure, wooden railings. 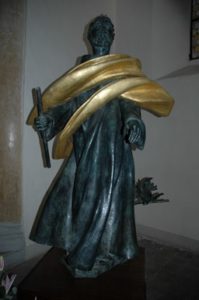 On parts of the path, there were no supports and I, for one, questioned if I would be able to continue. “Am I going to be able to take this risk?” I asked myself and remembered the many times I had asked myself the same question over the journey of my life.

As on the journey of life, I realised that on this journey, I was not on my own. We were making our way up to this cave, not alone or as individuals. As we carried with us our various cares and aspirations, each of us almost naturally was concerned for the other – adjusting our pace to suit others, making sure we were all safe, frequently offering a hand or shoulder of support or an encouraging “it’s just round the next corner”. Finally, we had made it and found ourselves in awe in this holy place where, even centuries later, there is such a strong sense of sanctity and prayer. 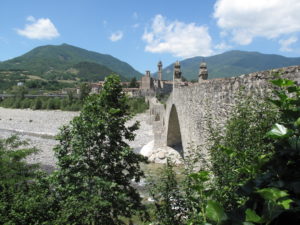 In the silence surrounding us, broken only by the singing of the birds, each of us remembered in prayer, the communities we represented – the Columban Fathers and the Columban Sisters and the people of Myshall, the birthplace of St Columban, and all those who have supported and kept alive the spirit of Columban over the years.

The return climb down was just as hazardous but now we carried with us not only a sense of achievement but a stronger sense of the spirit of St Columban.

In Coli, we met up once again with the rest of the group waiting for us, to find them concerned for our welfare and eager to hear about our experience – at the same time, making sure we had something to eat and drink and even washing the mud off our shoes for us! Surely, I marvelled, this concern for our welfare was similar to what Columban did when one of his monks, Domoal, complained about having to carry up water from the spring below in the valley around the monastery in Annegray. “Son,” said Columban, “make a hollow in the rock. Remember that the Lord drew water from the rock for the people of Israel.” Columban prayed and Domoal struck the rock and water flowed. 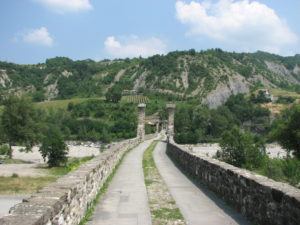 That evening, as we came together to celebrate the Eucharist, the symbolism of the modern sculpture of Columban in the basilica in Bobbio seemed to be even more appropriate as I reflected on the experiences of the day. Unlike other images of Columban, his halo is not above him but wrapped around him, depicting him wrapped up in the energy of God. The staff clasped firmly in his hand shows his teaching and preaching of the Gospel with authority. While his cloak shows a man with a mission, one in full flight, he is so grounded in everyday life that the dove is at his feet, rather than on his shoulder, symbolising his openness to the inspiration of the Holy Spirit coming, not from on high, but from the ground up. 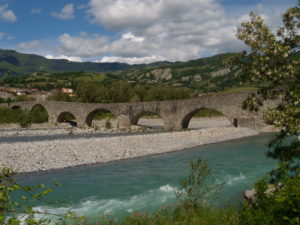 And once again, I felt a strong sense of wonder at the number of people who came into the crypt to say a prayer to this great missionary who had set out from his homeland centuries before – centuries which are still so closely linked with our life today as symbolised in our draping over the cathedral altar the Columban Fathers’ Centenary Cloth, bearing the names of people from all the countries in which Columban missionaries have lived and worked. Prayers were offered for each one named on the cloth – a fitting conclusion to our short time in Bobbio.

As we left the basilica, the site of Columban’s last monastery, I recalled his words, “This life is to be considered as a way and as an ascent. Then let us, who are on the way, hasten home; for our whole life is like the journey of a single day.” In that single day, I had traversed part of the Columban Way, overcome fears and insecurities, laughed with my companions, shared life with them – and I felt so grateful. 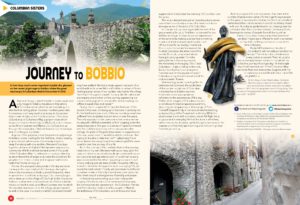 Sr Ann Gray is from West Lothian, Scotland. After traiing as a teacher she went to Africa as a lay missionary before joining the Columban Sisters in 1977. Her first assignment was to Hong Kong. She served as Congregational Leader on the central leadership from 2011 to 2017.