To mark the Feast of St Columban (23rd November), we publish Fr Sean McDonagh’s sermon for an ecumenical service in Bangor Abbey in Co Down. From Bangor St Columban set out on a 1400-mile journey across western Europe in 585AD.

Good evening and thank you for inviting me here to preach at this Columban service in Bangor Abbey. As a Columban missionary, it is a great privilege for me to join with you in this ecumenical celebration of the life and legacy of St Columban – particularly his sensitivity to all God’s creation which is very much needed in today’s Churches and world.

Everything in nature is interdependent and interrelated. All people are my sisters and brothers, and all creatures are my companions and care, and respect should mark how I deal with them.

Unfortunately, many Christians, down through the ages, did not believe in kinship or compassion between human beings and other creatures. According to St Augustine “reason has not been given to animals and so, by the most just ordinances of the Creator, both their lives and their deaths is subject to our use.” Thomas Aquinas was even more convinced that animals had no ethical value. He wrote that “we have no duties of charity, nor duties of any kind to the lower animals, as neither we have for sticks and stones.”[1]

This view of creation that believes  the world is inert and even dead and humans  can simply use nature for almost any purpose, was also held by both Martin Luther and John Calvin. Luther’s contrast between the Kingdom of Heaven which operated under God’s grace and the Kingdom of the World which operated under God’s wrath intensified the split between the ‘material’ and ‘spiritual’ dimension of the Earth which was already deeply embedded in Western culture and religion.

As a result, this kind of Christianity emphasizes individual redemption out of the world. It seldom reflects on the damage that humans are causing to the earth was almost universal – except among the Irish.

In early Irish Christianity, the beauty and wonder of the natural world was respected and celebrated. A prime example of this sensitivity to other creatures is found in St Ciaran of Saighir who founded his monastery in the fifty century.  His fellow monks included humans, but also wild animals such as foxes, badgers, wild boars, and wolves.

St Columban, mystic, monk, and missionary was very attuned to beauty and wonder of the natural world. In sermon 1 he wrote, “If you wish to know the Creator, understand creation,” Columban wrote excellent Latin – Intellige, si vis scire Creatorem, creaturam.

Anyone who visits the sites of Columban monasteries is struck by the beauty of their natural setting. Like other Irish saints, finding God in creation came naturally to Columban. Many legends grew up around him in Luxeuil. Squirrels and doves were depicted playing in the folds of his cowl.

Columban is telling us today that our Christianity must move from an exclusive concern for human salvation and include real concern for the Earth and God’s creation. We need to see the earth – not just as a resource for human needs – but as the source of life itself, to be cherished by all. That is so possible today with the enormous increase in scientific knowledge about the natural world. Today once can buy books on flowers, birds and other creatures in many shops.

Ethically, every being has rights that should be recognised and cherished. They have the right to be and the right to fulfil their role in the renewable processes of the Earth community. Trees have tree rights; insects have insect rights and even rivers have rights. And we humans must recognise these rights.

Our Christian faith must face the two issues which are central to the Earth and our planet. These are climate change and the massive destruction of biodiversity. Climate change received a lot of publicity in the run-up to and during COP26 in Glasgow in October and November this year. Many people were disappointed with the outcome of COP26.

It failed in the words of UN Secretary-General António Guterres to keep the goal of 1.5℃ alive”, to accelerate the decarbonisation of the global economy, and to phase out coal. It also has not raised sufficient money among rich nations to allow poorer nations adapt to climate change and steer their economies away from burning fossil fuels in the future. But, at least, the public did hear the arguments put forward so that we can judge for themselves how successful it was. 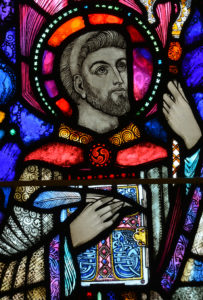 Unfortunately, another COP15 on Biodiversity took place in Kunming in China from October 11th -15th 2021. This COP15 did not receive the same level of publicity as COP26, though its message is extraordinarily serious.

We are living through the sixth greatest period of extinction since life began 3.8 billion years ago. The last time something similar happened was 65 million years ago when a meteor crashed into the Gulf of Mexico and produced high levels of volcanic activity and significant amounts of carbon dioxide which led to the extinction of many creatures, including the dinosaurs

A study in 2010 by The International Union for the Conservation of Nature (IUCN), estimates that:

are in danger of being pushed over the precipice of extinction.[3]

Twenty years ago, the famous Harvard biologist, Edward O. Wilson, has stated that, “The quenching of life’s exuberance will be more consequential to humanity than all present day warming, ozone depletion and pollution combined.” [4]

Unless we tackle biodiversity loss seriously, we could lose a million species in this century. This would be a disaster for every generation of humans and other life-forms who will live in this world, and it will impoverish the planet forever.

The Christian Churches, as midwives of God’s reign, must speak the truth about global environmental destruction in a much more forthright and unambiguous way.

The Churches should be encouraging new ways of living which are much less destructive than those we have in place in our fossil fuel-addicted world. Care for the earth should be at the heart of our doctrine, worship and practice. For almost four centuries the post-communion prayer in the Roman Missal prayed, “teach us to despise the things of earth and the love the things of heaven. In Latin, Oremus. Doceas nos terrana despicere at amara celestal.

Focusing on creation will have us standing with the victims, including the suffering Earth, and with other species against corporations and others who are currently destroying the world.

People of faith whose lives are directed by a spiritual perspective should be the most deeply motivated to respond to the challenge presented by the current bleeding of colour from the rainbow of life’s diversity.

People of my age are aware that across all the Christian Churches, young people do not attend Church services regularly, yet many young people are dedicated to fighting climate change and protecting biodiversity. If we in the Churches move our emphasis away from redeeming people out of the world and focus instead on serving all the creatures on this earth- many of these young people may be happy to join us in liturgies where we thank God for the beauty and wonder of creation. And St Columban’s writings will help us in this endeavour.

As a Christian, I am not without hope for the future. With members of many faith communities across the island of Ireland and inspired by the writings of Columban, I know that we can work together from within our rich and diverse traditions to celebrate and protect the diversity of species and protect planet earth. In the Gaelic that Columban would have spoken. Ní Neart go cur le Chéile – There is strength in unity.

[2] . A recent study by RSPB, Birdlife International and the Czech Society for Ornithology reports that we have loosed 600 million birds since 1980. 97 million yellowtails have been losses, 75 million starlings and 75 million skylarks are gone.