Home News Stations of the Cross in Seoul 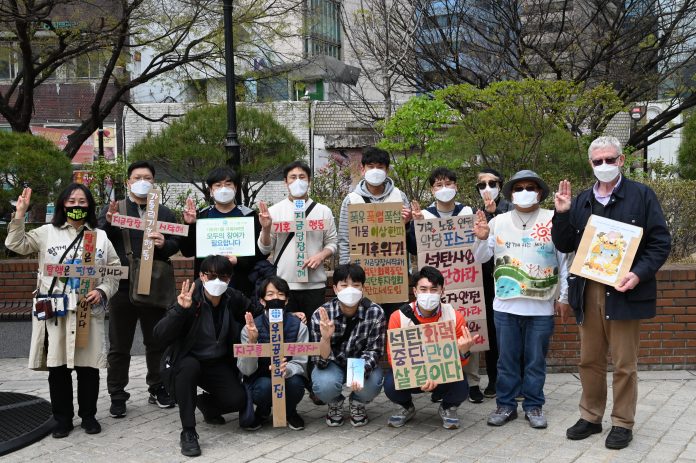 On Good Friday, the Columban formation community in Seoul participated in a liturgy organised by the Korean Branch of the Global Catholic Climate Movement (GCCM), writes Fr Donal O’Keeffe.

Formally inaugurated in January 2020, GCCM Korea is now a national movement coordinated by a team of lay persons, religious and priests.

The liturgy was organized by the Coordinating Team of GCCM where one of the key persons is Columban LM Noh Hyein Anna. In fact, it was Anna’s invitation which spurred us to participate.

On Good Friday forenoon about 70 persons gathered in Seoul city centre dividing into teams of seven – the maximum allowed to move as a group in line with the Covid Regulations. 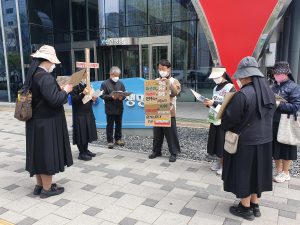 The 14 Stations of the Cross were set up ahead of time at various places in the business heart of the city with the final one at the steps of Myongdong Cathedral. The Way of the Cross highlighted the passion, suffering and death of God’s Creatures in our world today.

The participants, a mixed group of young and old, lay, religious and priests came prepared with placards, posters highlighting the suffering world and displayed those while walking the way of the cross.

For instance, at Station 9: Jesus falls again – we reflected on the plight of organic farmers driven to their knees by competition from the industrial sized GMO farming; Station 6: Veronica wiping the face of Jesus – focused on the Korean solidarity with the present passion of Myanmar, a nation and its natural resources sacrificed due to greed of the Generals. Station 12: Jesus dies on the Cross – we mourned the loss of diversity and life due to our own greedy culture. 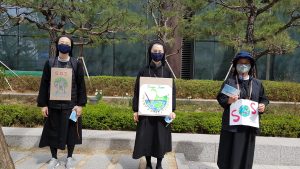 Starting at 11.30am, the stations finished at about 1.30pm. Walking through the business centre of the city at this time we were constantly meeting office workers coming and going to lunch.

The placards and posters caught the eyes of the passers-by and although engrossed in conversations it was clear that they were glancing at the content and reading the messages. One or two persons joined for the short prayer at the different stations.

Back in the Formation House we shared about the event. It certainly was a ‘Stations of the Cross’ with a difference! Some felt that the noise of traffic, people chatting as they went past, did not facilitate reflection on the event. For others this noisy, chaotic city centre atmosphere was probably closer in reality to the original way of cross than any liturgy in the silence and prayerful atmosphere of a Church.

Walking in a public place carrying a placard was a new experience for most of our community and so was a challenge in itself. 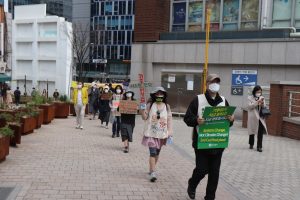 Again, the action of carrying a poster highlighting the suffering of the earth caused us I think to question more deeply our own consumer lifestyle, our unconscious acceptance of the modern convenient way of living which keeps the exploitative system in place.

This was and is a very uncomfortable thought, a serious challenge and invitation to us as disciples today. All in all, it was one of the most meaningful times of Holy Week for us in Seoul in 2021.