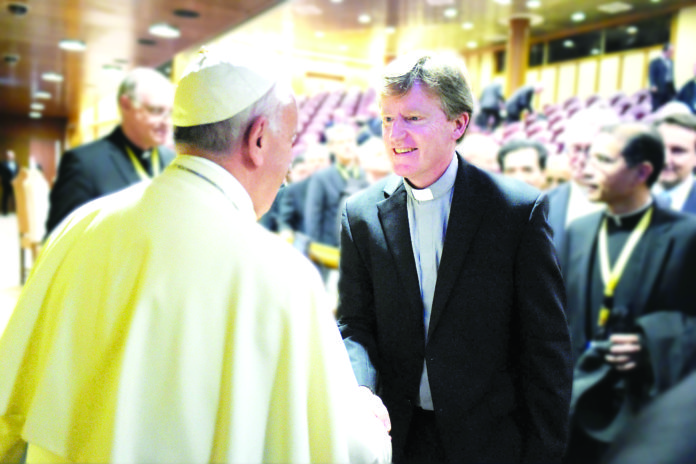 Greetings of peace and gospel joy from the members of the General Council and the Lay Missionary Central Leadership Team to everyone across the Society on the occasion of the centenary of the foundation of the Society, the Feast of Sts Peter and Paul, June 29th, 2018.

We gather across the Society in thanksgiving to God for the many blessings received over the past 100 years in service of God’s mission.

In celebrating the Centenary of our Foundation we can look back in heartfelt gratitude for the movement of God’s Spirit in the events that took place at this time 100 years ago.

On October 10th, 1916, the Bishops of Ireland gave approval for the new missionary endeavor, formerly known as the Maynooth Mission to China and later to be known as the Missionary Society of St Columban.

It is said that “the bishops were rejoiced and thankful to God for this new and striking evidence of the continued life of the ancient Irish missionary spirit.”

Shortly after the Irish Bishops’ approval, professors from Maynooth, together with priests and sisters from religious orders, and almost every diocese in Ireland, helped in the nationwide appeals to raise funds for the new Society.

Ever since we have been truly grateful for the support we have received from our benefactors and local churches all across the world. Without their support we would not be celebrating our centenary.

Our celebrations during our Centenary Year have been a wonderful way to thank our benefactors, all those engaged in Columban mission, and those among whom we live and serve. In our lives as Columban missionaries we truly have experienced the wisdom of the words of St Columban who said: ‘A life unlike your own can be your teacher’.

In the latter months of 1916 Cardinal Logue in Ireland forwarded the decision of the Irish bishops to the Vatican through Monsignor Michael O’Riordan, the Rector of the Irish College in Rome. Monsignor O’Riordan presented the letter in December 1916 to Progaganda Fidei.

There was no response. In May of the next year, 1917, Monsignor O’Riordan sent a message back to Fr Blowick in Ireland, ‘Come out and come quickly’. Fr Blowick later discovered that someone had reported to Rome that the new mission was merely an excuse for Irish priests who did not wish to join the British army, “they said we weren’t genuine missionaries at all. We were just a bunch of Irish priests who were providing a decent front for priests that didn’t want to go to the army”.

Frs Blowick and Galvin arrived in Rome in July 1917. With the help of Monsignor O’Riordan, his vice-rector Fr John Hagan, and letters from Cardinal Logue, the two young priests convinced Propaganda Fidei that the undertaking was bona fide and real.

The Cardinal prefect of the Congregation, Domenico Serafini, handed them letters for Cardinal Logue and the Irish bishops welcoming the ‘founding in Ireland of a college for Foreign Missions’.

The Cardinal prefect added that Pope Benedict XV gave ‘his most cordial approval of it, and desired me to add in his name a wish that the new work might be started with alacrity’.

On the Feast of Sts Peter and Paul, June 29th, 1918, two years after the Irish Bishops’ approval, the Maynooth Mission to China was formally erected by Thomas O’Dea, the Bishop of Galway. This day was thus marked as the Foundation Day of our Society.

We wish everyone a very happy and joyous Foundation Day and pray that the missionary zeal of Sts Peter and Paul, our Patron St Columban, our co-founders Frs Edward Galvin and John Blowick, and all the Columbans who have gone before us, will continue to fire within us a passion for mission in our world today.

We continue to pray for all our benefactors, both living and deceased, for their constant support and prayers. May God bless them and their loved ones.

And we keep each other in prayer in a special way on the special occasion of the Centenary of our Foundation.