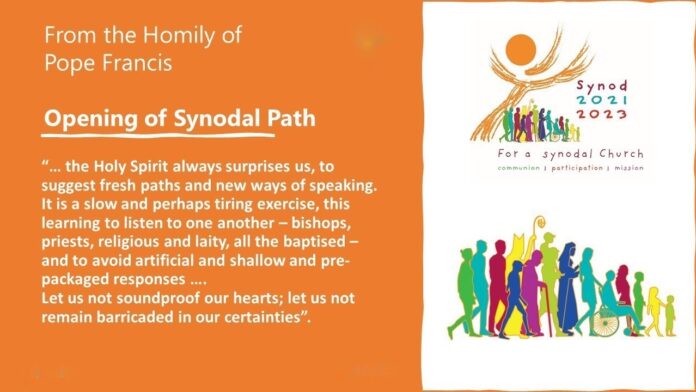 Purpose of the Universal Synod
The basic meaning of synodality is ‘journeying together,’ walking together on a path. The Synod logo is basically an image of people ‘on the way.’ The purpose of the universal Synod announced by Pope Francis is to address the topic of synodality itself, to move forward to something new, to take the steps necessary to become a Church which has a more synodal approach in addressing all matters pertaining to its life and mission.

This Synod is inspired by Second Vatican Council’s vision of the Church as the pilgrim and missionary People of God, reading the signs of the times as it journeys through the world and with the world, and witnessing to the Good News of Jesus Christ in the circumstances of today’s world. The objective of the Synod is pastoral rather than doctrinal. It’s about the Church’s way of being and working today.

The aim is not to produce documents, but, in the words of Pope Francis, “to plant dreams, draw forth prophecies and visions, allow hope to flourish, inspire trust, bind up wounds, weave together relationships, awaken a dawn of hope, learn from one another and create a bright resourcefulness that will enlighten minds, warm hearts, give strength to our hands.”[1]

The synodal approach did not begin with Vatican II. It can be traced back to the earliest days of the Church. The Acts of the Apostles presents a vision for a synodal Church. For instance, at the Council of Jerusalem (Acts 15), we see a synodal Church sharing experiences, listening to one another, opening themselves to the guidance of the Spirit as they faced new challenges and crucial decisions for the Church’s life and mission. Throughout the first millennium, the synodal practice of ‘journeying together’ was quite strong at all levels of the Church. An oft-repeated maxim was: “What concerns all should be treated by all.”

During the second millennium, however, in the Western Church in particular, the synodal approach gradually faded into the background with an increasing emphasis on the hierarchical function in the Church. In the Eastern Churches, it remained a lot stronger. The present emphasis on synodality, then, is not just a new fad. It’s about retrieving the richness of our earlier Christian tradition and focusing on something that is essential to the very nature of the Church. “It is precisely this path of synodality which God expects of the Church of the third millennium.”[2]

Three Principles of Synodality
In the Handbook produced for this Synod, we have a key sentence which almost amounts to a definition of synodality: “A synodal Church walks forward in communion to pursue a common mission through the participation of each and every one of its members.”[3]  ‘Communion,’ ‘participation’ and ‘mission’ are the key words in this sentence. They point to the three interrelated axes around which the synodal process revolves.

Invitation to All the Baptised
Pope Francis invites all the baptised to take part in the synodal process. Everyone has something to contribute and something to learn.  He is convinced that we must trust the sensus fidelium, the living voice of the People of God. The flock, he says, “has an instinctive ability to discern the new ways the Lord is revealing to the Church.”[4] The Church must be particularly attentive to those on the margins of the Church and those who have drifted away from the Church, and also listen to the voices of other Christians, peoples of other religions, unbelievers.

The Church’s journey has to be seen in the context of entire human family’s journey as it faces today’s great global challenges, especially the challenge to listen to and heed the cries of the poor and excluded one, and the cries of the exploited earth. To emphasise the necessity of listening to as many people as possible, the Pope decided that this Synod would not be just a once-off event in Rome, but an extended process of reflection and discernment at local, national and continental levels, culminating in a final synodal event in Rome in October 2023. This celebration in Rome is to be “the point of convergence of this listening process conducted at every level of the Church’s life.”[5]

Role of the Bishops
Some are sceptical about the synodal process because, they say, the bishops in Rome will determine the final outcome.  Others suspect it as a way of questioning or at least diluting the legitimate teaching authority in the Church. While Francis clearly upholds the indispensable role of this authority, he is insisting that hierarchical ministry must be exercised within the framework of the Church’s essential synodal nature. “Synodality starts with hearing from the whole People of God. A Church that teaches must be firstly a Church that listens.”[6]

Open Dialogue
The synodal process is an open dialogue in which there is honest sharing and attentive listening. We need to emphasise the listening side of the dialogue because it is often harder for us to listen than to speak. “Today’s world is largely a deaf world… At times the frantic pace of the modern world prevents us from listening attentively to what another person is saying. Halfway through, we interrupt him and want to contradict what he has not even finished saying. We must not lose our ability to listen.”[7]

Pope Francis often says that the synodal process is driven by the dynamism of mutual listening, a listening which is simply more than hearing and in which everyone has something to learn. In the synodal process, debates and arguments are to be avoided in which we defend positions, push agendas, and try to win others over to our views.  We must listen respectfully to one another, including those who hold views contrary to our own.

Reflecting on Experience
What we are focussing on in the dialogue is our lived experience, not just theories or ideas, not just what we read in a book or heard someone else say. Each one’s experience has been graced by God’s presence. Each one receives the Spirit at baptism. Each one is endowed with gifts by God which can build up the community. The story of each one can enrich our faith and by listening to each other’s experience we can sense God’s presence and action in our common story as the People of God. In sharing our experiences, we must resist the temptation to focus almost exclusively on negative experiences of attitudes and practices which block the emergence and development of a more synodal Church.

It is good to begin by recalling some positive experiences of communion, participation and mission which remind us that the Spirit is already at work among us. We can then go on to reflect one how the work of the Spirit to bring about a more synodal Church is being frustrated and pray for a greater responsiveness to the Spirit.

Listening to the Holy Spirit
Ultimately, what we are trying to hear in our sharing is the voice of the Holy Spirit who guides and energises us on the synodal path, just as he guided and energised the early Church in its life and mission. The fundamental question underlying every synodal process is ‘Where is the Holy Spirit leading us in the Church today?

In his book, Let Us Dream, Pope Francis has this to say: “What characterises the synodal path is the role of the Holy Spirit. We listen, we discuss in groups, but above all we pay attention to what the Spirit has to say to us. That is why I ask everyone to speak frankly and to listen carefully to others because, there, too, the Spirit is speaking. Open to changes and new possibilities, the Synod is for everyone an experience of conversion.”[8] Speaking at an audience with a delegation from Italian Catholic Action in 2021, the Pope says: “There cannot be synodality without the Spirit, and there is no Spirit without prayer.”[9]

The process of the Synod, then, becomes one of spiritual discernment. Prayerful reflection, listening to the Word of God, moments of silence and liturgical celebrations are very much part of the process. Opening ourselves to the guidance of the Spirit, we hope to reach some agreement about the way forward and take the practical steps to move in that direction. The consensus or agreement often takes the form of a harmony in which diversity is not divisive, but mutually enriching.

The Covid Factor
The Covid-19 pandemic has presented difficulties for gathering to engage in the synodal process together. But it has also brought home to us the urgent need to raise basic questions about our values, relationships and lifestyles. Francis is asking the Church to discern its way through this crisis in the conviction that we must search together for more fraternal ways of living and relating, rather than simply trying to go back to the way things were.

“The change of era, accelerated by coronavirus, is a propitious moment for reading the signs of the times. A gap has opened up between the realities and challenges we face and the recipes and solutions available to us. That gap becomes a space in which to reflect, question and dialogue.”[10]