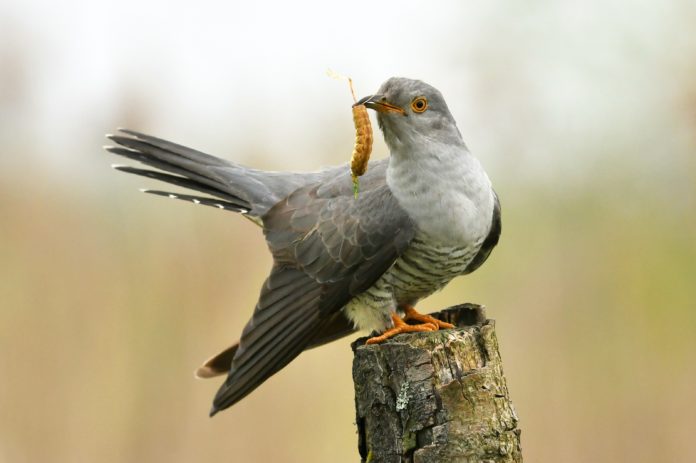 After months of dark, gloomy weather, the cuckoo arrives to deliver the good news that summer is almost here. The famous ‘cuck-coo’ call of the male gives the bird its name and ‘onomatopoeia’ is the big word used to describe this.

The cuckoo is one of the few birds that is rarely seen and yet very well known. One of its most unique features is its feet which are ‘zygodactyl’. This second big word means that its two inner toes point forward and the two outer toes point backward.

Cuckoo mothers are famed for laying their eggs in other bird’s nests and leaving the other bird to feed and rear their offspring. They will select a nest in which the eggs are similar in colour to their own. Upon hatching, the cuckoo chick will not tolerate the other chicks and extends one of its powerful legs and back-kicks the other hatchlings or eggs out of the nest.

When the mother returns, she will find fewer and fewer of her own chicks. The cries for food of the young cuckoo can be so loud and demanding that other birds are often persuaded to feed it and oftentimes, the young cuckoo will grow even larger than its foster parents.

When they are fully grown, the juvenile cuckoos will fly to their wintering areas in tropical Africa, despite never having been there before. Their biological parents will have travelled some weeks earlier.

In the Gospels we are told that God looks after the birds of the air. He feeds and cares deeply for them. In the case of the cuckoo this is certainly true and many say that they get away with murder! Others say they are entrepreneurs and use what God gives them. What would you say and what do you think God might say?