Home News The Challenges of Militarism 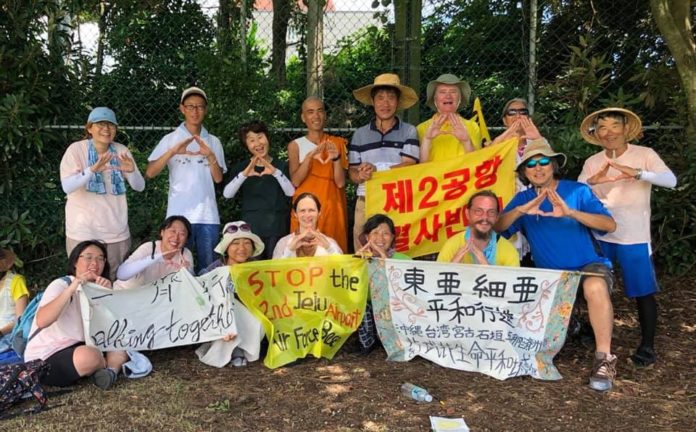 Irish Columban, Fr Patrick Cunningham, who is based in South Korea, explains how activities related to military spending impact on the environment and on the well-being of vulnerable communities living near sensitive locations and sitting on precious resources.

The military industrial complex and the fossil fuel industries are connected to one another. In relation to the ongoing destruction of the Amazon rainforest there is one company, BlackRock Inc, which encompasses all the concerns of Amazon peoples.

In recent times it has funneled investments to bad actors in Brazil and is complicit in the destruction of the Amazon rainforest and the violation of the rights of indigenous communities.

With $5 trillion in assets, BlackRock Inc is the largest corporation of its kind and as the world’s largest investment firm it happens to be one of the top investors in leading weapons manufacturers such as Lockheed Martin, Boeing and Raytheon among others.

The weapons from these companies are used in military strikes around the world, resulting in untold numbers of deaths of innocent civilians and the destruction of the environment. These weapon companies, bolstered by BlackRock Inc, lie at the heart of the military-industrial complex.

BlackRock Inc  has positioned itself to benefit massively from Pentagon contracts with the above defense contractors and are making huge profits from global suffering.

One may ask what has this company got to do with the destruction of the Amazon and the climate crisis? Well, it has strategically taken advantage of Brazil’s far-right President Jair Bolsanaro’s disastrous environmental actions which have prioritised corporate interests over environmental protections in the Amazon, fueling the widespread forest fires that have been raging over the last month or so.

The destruction has put indigenous people and local communities under acute threat while destroying millions of acres of rainforest.

Bolsonaro has been a strong advocate for the opening up of the Amazon to industry and agribusiness and as a result BlackRock Inc has expanded its operations in Brazil on the back of his election. Moves like this signal strong support for Bolsanaro’s vitriolic rhetoric, inspiring violent attacks against indigenous people while welcoming the removal of environmental barriers to economic activities in the Amazon.

As one of the largest investors in Brazil’s agribusiness industry, BlackRock Inc has displayed a reckless disregard for the livelihoods of indigenous peoples as stakeholders and vital protectors of the Amazon rainforest.

Earlier this year at the 4th Global Meeting of the Indigenous People’s Forum, Pope Francis described indigenous peoples as representing a ‘living cry of hope’ who with their ‘variety of languages, cultures, traditions, knowledge and ancestral methods’, should become ‘a wake-up call, that humankind is not the owner of nature, but the one who manages it.’ They remind us of our shared responsibility to care for our ‘common home’.

Heavily investing in the fossil fuel and agribusiness industries with its tentacles strategically placed at the brutal heart of the military-industrial complex, BlackRock Inc is hoping to profit from agribusiness at the expense of the destruction of the Amazon rainforest and the displacement of indigenous people.

In calling attention to the extreme damage that the military does to the environment, Gar Smith, a co-founder of Environmentalists Against War, says that, “we need to sign a peace treaty with the planet.”

The upcoming Synod on the Amazon will hopefully provide an opportunity for people of faith to acknowledge and call out greedy corporate and political interests who seek to put profits before people while gaining from the destruction of the Amazon.

This goes to the heart of a major irony: that militarism, with its dependence on fossil fuels, contributes extensively to climate change, while the fight for control of fossil fuels and the environmental destruction they cause is a leading prompt for war.

Naomi Klein, in her groundbreaking book ‘This Changes Everything’, suggests that under the ‘polluter pays’ principle, the US military as the largest single consumer of petroleum in the world should therefore be held to account for its carbon footprint.

According to WorldBeyondWar.org, the Pentagon and the US military machine, with its 800 bases worldwide – including a total of 83 bases in Korea – have a daily consumption of 340,000 barrels of oil and an horrendous environmental record.

Decades of US presence in South Korea have left a toxic track record of contaminated soil and polluted groundwater. Oil spills and leaks from dilapidated underground storage tanks at numerous US bases for decades have continued to pollute water and soil resulting in major public concern and big clean-up costs.

For instance, in 2000, an environmental organisation disclosed that United States Forces Korea (USFK) had illegally disposed of 470 bottles of highly toxic formaldehyde from the Yongsan base mortuary in the Han River without proper treatment.

The Han River is a major source of drinking water for more than 10 million people in Seoul. The U.S. government has always sought to ensure that it’s military be placed over and above international environmental law and climate agreements.

Gangjeong village is the site of the controversial naval base built by the South Korean government and Samsung C&T Corp. Located on the southern part of Jeju Island, the ‘island of world peace’, it came with a massive price tag of $907m.

The waters along the coastline are within a UNESCO Biosphere Reserve and are protected by international law. The underwater ecology and marine life once provided a very rich habitat for soft coral, with the area near Tiger Island a favorite destination for scuba divers. The once unique coral populations and surrounding biodiversity has suffered irreparable damage due to constant leakages of fuel, heavy metals and other contaminants.

Reduced and changing current patterns around the base have led to the demise of coral populations near the seawalls.

The waters off the Gangjeong coastline once represented a major habitat of the Indo-Pacific bottlenose dolphin but has been disrupted due to the passage of warships in and out of the base. Among the many people adversely affected by the base are those who once earned a comfortable livelihood from the rich

marine life, namely the famous women sea divers of Jeju and fisherfolk who once comprised the majority of people in the coastline villages. Following traditional methods, the divers once harvested abalone and other shellfish from the seabed.

Construction work on the naval base, which was due for completion in December 2015 had been halted numerous times over the preceding eight years resulting in numerous incarcerations of activists who were deeply concerned by the environmental impact of the base. An indemnity suit was launched by the Korean military against the village and activists for loss of earnings due to the many delays which was eventually overturned by the Moon government.

In an area once labeled by the Korean Government as an ‘Absolute Preservation Area’ and a ‘National Cultural Asset’, Gangjeong Village, its living rocky coast, and offshore waters and rich marine life were commanded to make way for the construction of the now complete naval base. This destroyed the social fabric of the once tightly-knit community.

The official environmental designation has been literally washed away in the quest to build the base in order to facilitate the US military and its China-containment policy in the Asia-Pacific region.

It has little to do with Korean national security. Jeju locals comment sarcastically that the government is building the base to counter China while Chinese investors are buying up land in Jeju and Chinese tourists are increasingly becoming the mainstay of the local economy.

doubling of US military operations in the region and all its environmental consequences, the deployment of US troops to Darwin, Australia and base expansions in Guam, the Philippines, and Okinawa.

Base expansionism in the region has come at huge social and environmental costs, often breaking up and displacing local populations. With no end in sight to the resistance against militarism on Jeju Island, there are now plans to build a second airport (air force base project) on Jeju Island which is putting the Bijarim-ro forest in jeopardy.

This past summer as part of the Jeju annual peace march, I witnessed the devastation that has been wreaked on this precious forest, aimed at creating a wide motorway connecting Jeju city to the Jeju air force base project. We learned about the struggle to save the forest initiated by a small group of women who have made their homes there and raise awareness through social media.

They have closely monitored the activity of loggers and have invited scholars and environmentalists to visit and identify rare or endangered species that depend on this unique forest ecosystem. Due to their brave resistance the destruction has been temporarily halted.

Our ongoing solidarity is owed to the numerous people mounting protests against the ravages of militarism and environmental destruction all across our beautiful planet. With the upcoming Amazonia Synod we recommit ourselves to working with concerned citizens in heeding the ‘living cry of hope’ of indigenous peoples of the Amazon, and in defying business as usual in taking urgent action to save all our futures.

Fr Pat Cunningham is the Justice, Peace and Integrity of Creation worker for the Columbans in Korea. This is the twelfth in a series of Columban articles this year, leading up to the Synod on Amazonia in October 2019 at the Vatican. All the articles are available on ICN under ‘Amazonia Synod’ and at https://columbancenter.org/Synod-on-Amazon-Model-for-World. The series of articles called ‘Synod on the Amazon: Model for the World’.