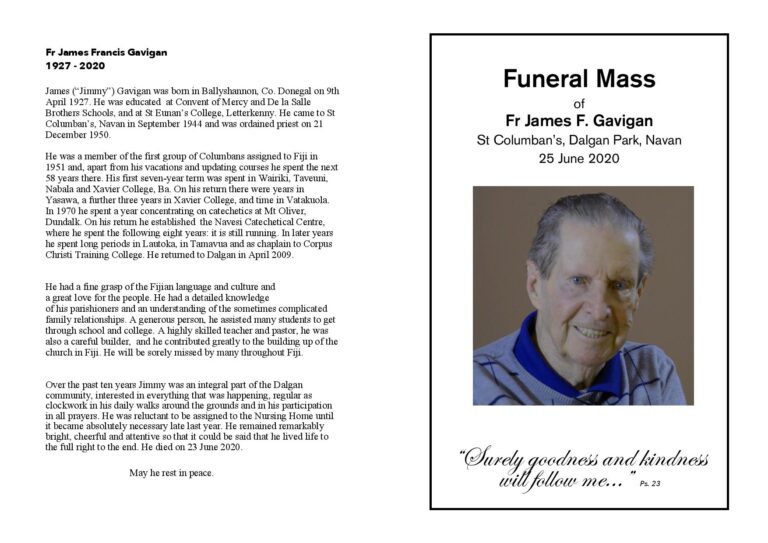 In brilliant sunshine on Thursday 25th June 2020 we bid farewell to Jim Gavigan.

Fr Gerry Neylon was the celebrant and he was assisted by Fr Ray Husband, Regional Director.

Gerry in his homily touched on the wonderful contribution Jim made over a 58 period in Fiji. He was the longest serving Columban in Fiji. One of his outstanding achievements to the Church in Fiji was establishing the Navesi Catechetical Centre which is still running.

He was a deeply spiritual man but he also had a very definite mind of his own. He certainly was very determined in a good sense. He kept his independence almost to the very end. He was very reluctant to go to the Nursing Home in Dalgan as he did not want to lose his freedom.

Dr Paddy Tierney was his hero. When Gerry mentioned to Jim about the advantages of the Nursing Home, Jim said that Dr Tierney knows best. Dr Tierney had mentioned about him needing special care but that he didn’t see the need for him to reside in the Nursing Home. This was music to Jim’s ears.

The readings were read by his nephew Jim and his niece Patricia. His two sisters Roisin and Josephine prayed the Prayers of Intercession.

In the final commendation, Ray Husband offered his deepest sympathies and thanks to Jim’s two sisters Roisin and Josphine and to his nephew and niece. Roisin and Josephine had always a great welcome for Jim.

He also thanked Jim for his long years of dedicated and faithful service to the people of Fiji. Even if he was a reluctant resident of the Nursing Home he was very appreciative of the great care he received there.

Ray thanked the Nursing Home Staff for their great kindness to Jim. Ray also stressed that Jim up to the end took a keen interest in Columban Mission not only in Fiji but worldwide.

He was a very kind person who was always on the lookout for others and particularly for his classmate, Terry Bennett, happily still with us. Jim was like a sparrow compared to Terry. Yet Jim would wheel Terry to his room after meals and insist on doing so.

Fr Padraig O’Donovan led the prayers at the graveside. He said that it was fitting that Jim was being laid to rest on such a beautiful morning which is reminiscent of the sunshine of Fiji.

Padraig also mentioned that Jim was being remembered that day by so many people in Fiji. Bernie Mulkerins recited a decade of the Rosary followed by the singing of Salve Regina.

Due to the COVID-19 restrictions this was a private ceremony. It was fitting that it took place on the Feast of St John the Baptist. Fr Donal Hogan officiated. He thanked Jimmy for the great witness he gave to the people of Fiji and to the Church in Fiji. He always had a word of encouragement for others.

On one occasion Donal asked Jimmy why he sat in the draftiest spot in the dining room. He said that he wanted to keep his classmate Terry Bennett company. Then he would wheel Terry to his room.

Jimmy very much enjoyed the social drink at night with other Columbans. He would know exactly the type of drink a few of the Columbans in wheelchairs liked and would prepare it for them and made sure that they had second, one for the road and a good night’s sleep.

He had a great appreciation of Fijian culture and loved the people of Fiji. He was a kind person and greatly appreciated acts of kindness.

Donal concluded by reading a few verses from the Hymn of Morning Prayer from the Breviary for Week 4 Thursday. “Alone with none but you, my God, I journey on my way; what need I fear, when you are near. We have our fate with you and wait your bidding when to go….”

Fr Padraig O’Donovan had prepared the centrepiece in front of the main altar with a photo of Jim in the centre surrounded by a Fijian Bible, a whale’s tooth and a kava bowl, symbols of Fijian culture and hospitality.

Jimmy would have been very chuffed.