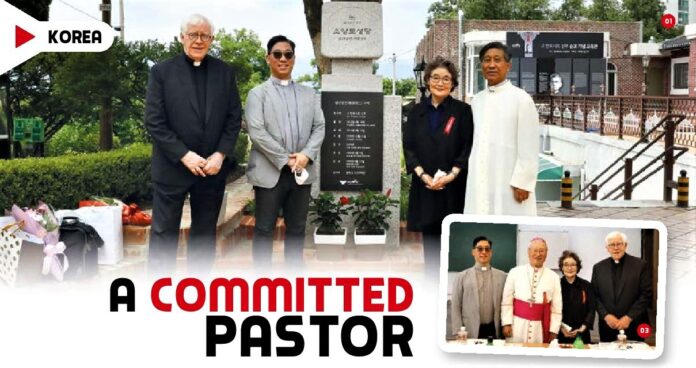 To mark the 70th anniversary of the death of Columban martyr Fr Tony Collier, we publish here the sworn account of his catechist Gabriel Kim of the last days of Fr Tony. The account outlines the circumstances of his death.

Gabriel Kim himself was shot while tied to Fr Tony and was buried along with the Columban. After three days in the grave he managed to escape. It is because of Gabriel Kim that we know today the circumstances of how Fr Tony was shot and where he was buried.

According to the request of Your Excellency, I Gabriel, describe here briefly what I saw and felt during the martyrdom of Fr Anthony Collier.

On 25th June 1950 we met some refugees after the Sunday Mass and were informed that the roaring of the guns we had heard earlier that morning was that of the invading Red Army. The shells began to strike the streets in the afternoon, but the church was still safe since it was under Mount Bong Ui. We had Evening Prayers with several Catholics who lived near the church, and though we did not know it, it was to be our last Benediction.

On the 26th June 1950 after Mass the shells began to strike spots nearer and nearer to the church, and Fr Collier who had said, “If anything happens, I must remove the Blessed Sacrament,” consumed it. After luncheon, we moved from the kitchen into the shelter in the backyard of So-Yang-Dong parish church to escape the danger of bombardment. A shell struck the kitchen soon after we had left it, and nobody was hurt. 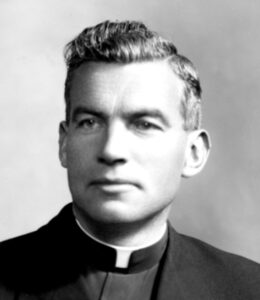 Father said, “It’s just as well I removed the Blessed Sacrament” and added “It’s dangerous here. You should move on. I will watch the Church.” At that time James, Therese and I were there with Fr Anthony. His decision was so firm, that Therese and I left Father, and went home during an interval in the bombardment.

The shelling continued all night long.

On the morning of 27thJune, we knew that all the South Korean Army had evacuated the position near our church and we saw the Red Army advance along the road. At about 1pm, I recommended Father to go to Juk-Rim-Dong, instead of staying alone at So-Yang-Dong church. To his enquiries about the local Catholics, I replied that everybody had safely escaped from the town.

After we left our church, we saw nobody on the streets of Chunchon, till we came across two Communist soldiers at the Rotary in the main street of Chunchon. They held us up, stole everything we had and bound our hands together.

They asked Fr Anthony, “Who are you?” He replied, “I am a priest.” They asked again, ”Aren`t you a spy?” and he answered calmly, “I am a Catholic priest, a missionary.” Then we were taken to the post office which was about 100 meters from the place where we had been arrested. There were many Red Army military cars there.

The two soldiers reported to a man, who seemed to be a Commanding Officer, that they had caught two spies. Fr Anthony declared again that he was not a spy but a priest. The officer ordered them to take us somewhere, but where I could not hear clearly. They ordered us to go to the nearest river, and we walked along a road behind the Chunchon High School towards the downtown section. I guess Fr Anthony already knew he was on his way to his death. We came across several groups of Red Army soldiers, who mocked us, but Fr Anthony walked on calmly.

I thought I would soon be in Heaven also, since I was with Fr Anthony, who had devoted his life to Our Lord, so I asked him to forgive me for all my faults in the past. He said “Yes.” When he started to continue speaking, the soldiers shouted to us to keep quiet. So we walked on in silence.

When we arrived at Kyong-Chun Road they ordered us to go into a lane. We stopped in front of a small empty sloping garden at a distance of about thirty meters from Chunchon Revenue Office. The soldiers said to Father, “If you have any family or relations we will send them news, so speak up.” Father replied, ”I have not.” They asked Father, “Will you make a will?” Father said “No.”

They proposed covering his eyes, but Father refused and they shot him in the back. I did not know what kind of gun they used as they had three kinds of guns, a rifle, a pistol, and a magazine-rifle. They fired five times and the first, fourth and fifth shots were aimed at Father. It was about two o’clock in the afternoon. Father fell down without any words.

The state of my mind was so serene that I had no dread of death. At the moment of hearing the shots, all my mind was filled with the hope of Heaven, since I thought I would be dying with Father, who had sacrificed his life for Our Lord, and there was no room for any other thought about this world.

Considering that such a worldly person like myself possessed such a state of mind, at that time, I do believe that Father, who had spent all his life for Our Lord, had a mind full of love for Our Lord, which made him walk on the way to death with no complaint or refutation, but with a calm attitude and even a smile.

I attended as a witness at the exhumation of Father Anthony99s remains by UN soldiers on the 9th October 1951. The place was correct, and they were indeed Fr Anthony’s clothes. The body had wounds on its face and arm and there were three medals which Father always wore. After prayers for the dead, the remains were removed to Juk-Rim-Dong Cathedral.

The next day, 10th October, the Requiem Mass and Final Absolution were held by Fr Tji, at the partly ruined Cathedral, and the funeral took place behind the Cathedral.

I swear that all of the above about Fr Anthony Collier is true.

After signing the original document in Korean, Gabriel Kim took an oath that it is all true, in my presence in Chunchon 5th October 1968.

You can read about a special commemoration for Fr Tony Collier in the Korean city of Chunchon in the November 2020 issue of the Far East magazine. Subscribe here: https://columbans.ie/product/far-east-magazine-yearly-subscription/ 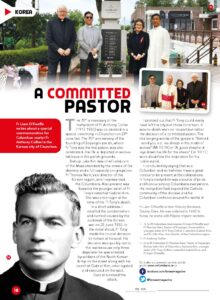