The situation is still critical, reports Columban missionary Fr Liam O’Callaghan. Writing from Pakistan’s Sindh province, where the Columbans work, he explains how the government has declared 23 out of 29 districts as calamity-hit areas.

“I have seen many humanitarian disasters in the world, but I have never seen climate carnage on this scale.” That was the response of UN General Secretary, Antonio Guterres last week as he visited areas worst affected by the unprecedented flooding in Pakistan.

The scale of the disaster is almost overwhelming – 33 million people out of a population of about 229 million affected, almost 1,500 killed and damage estimated now at $30 billion.

In Sindh province, where the Columbans work, the situation is still critical in the worst affected areas due to the flooding from the overflowing River Indus and Lake Manchhar. At the moment there is a medium flood risk level along the River Indus between Sukkur and Kotri districts in Sindh, rising to high flood risk downstream of Kotri into the Arabian Sea.

The Sindh Government has declared 23 out of 29 districts as calamity-hit areas. 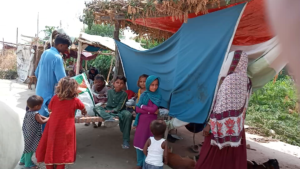 Hundreds of thousands of people have been made homeless by the flooding with the OCHA (UN Office for the Coordination of Humanitarian Affairs) estimating that 1.5 million houses in Sindh are damaged or destroyed, 88% of the total nationwide. An estimated 1.2 million hectares of agricultural land has reportedly been damaged in Sindh alone, leading to huge concerns for food security, scarcity and inflated prices over the coming months.

The health concerns are enormous also, with over 1,460 health facilities affected in Sindh, of which 432 are fully damaged and 1,028 are partially damaged. The obvious concern is the likely rise in waterborne diseases with lack of proper sanitation and little or no access to clean water. Cholera is another major concern, as are malaria and dengue fever both caused by mosquito bites; the stagnant flood waters are a major breeding ground for mosquitos.

Education is also severely affected; at least 22,000 schools have been damaged, mainly in Sindh province, and at least 5,500 schools are being used as shelters. 3.5 million children have had their education disrupted. In Sindh, the provincial government fears that school enrolment would be 50% less this year.

This week, we visited the affected areas of Kotri along the River Indus, flowing downstream into nearby Hyderabad to assess the level of damage and possible response to the needs. 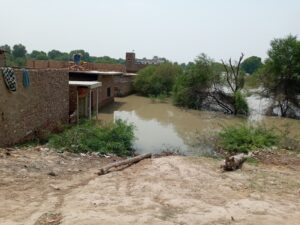 It was like looking over a lake that extended for kilometres, and only a brown discoloured movement in the distance indicated where the river was. People had moved up to high ground, often on roads, to live in temporary shelters, many without tents and surviving in very poor conditions.

Many have lost crops and livestock and are depending on the help of NGOs, community/religious groups and government agencies; however, it is uneven in terms of reaching all the affected and some shared that they have not received anything yet from any group.

The Columbans here are assessing the situation in terms of creating a coherent response with the resources that we have and donations that will be our responsibility to distribute. There are two distinct phases: – the relief phase and rehabilitation phase.

At the moment, the focus is on relief, and it is clear that this phase will last a number of months at least, as thousands of people are desperate need of the basic needs of food and shelter and in such unhygienic conditions the health risks are enormous.

Columbans are responding with food rations, mosquito nets, shelter especially in the parish areas we work as well as other areas. This will need to continue for some time to come. 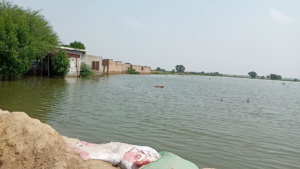 The rehabilitation phase will be long-term and last for years in terms of house building, house repairs, recovery of livestock, income generating projects, rehabilitation of educational and health facilities etc.

In the face of such needs, we can only do so much and are assessing options to see what contribution we can make in collaboration with others, in this rehabilitation phase. We will do this, as we are doing in the relief phase, with the generosity and support of Columban donors and benefactors.