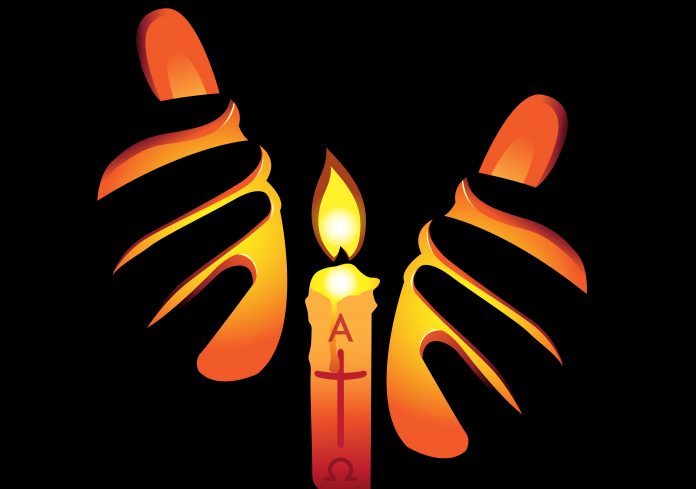 The Paschal Candle symbolises the risen Christ. Fr Tim Mulroy recalls a particular candle with its own unique story about prison and freedom, as well as hope and promise.

This is the night,
when Christ broke the prison-bars of death
and rose victorious from the underworld.

During the celebration of the Easter Vigil last year, this verse from the Exsultet resonated deeply within me. As the Paschal Candle, signifying the risen Christ, was raised high, I imagined the radiance of his glory dissolving the steel bars encircling the prison of death. Thanks to Christ’s profound love for us prisoners, held captive by our own selfishness and shame, we have been set free in order to begin a new life filled with hope and promise.

As I continued gazing on the Paschal Candle, I also became aware that this particular candle had its own unique story to tell about prison and freedom, about hope and promise.

Haiti Muller is from the island kingdom of Tonga in the South Pacific. In 2015, she became a Columban lay missionary and was assigned to the Philippines. After learning the Cebuano language, she joined the ministry team that visits the men’s prison in the city of Cagayan de Oro. In addition to attending to the spiritual needs of the inmates in that overcrowded facility, the ministry team also offers pastoral support to their families.

The prisoners shared with Haiti their feelings of loneliness, frustration and depression. They also shared about how much they miss their families, as well as their longing to make a new start in life. As their release day approached, they became so excited, delighted – and scared! While they cherished great hopes, they also realised that there were many obstacles on the path ahead: a lingering sense of shame, distrust by others, and a lack of job skills.

Hearing such stories over and over again, and seeing how some former prisoners had fallen quickly back into their old way of life and were soon returned to prison, Haiti realised that something needed to be done to help them make a new start. Since one of her Columban lay missionary colleagues had a candle-making livelihood project for poor women in the capital city of Manila, Haiti decided to go there and learn about it.

Some weeks later, having received not only an understanding of the candle-making process, but also encouragement and support, Haiti returned to her prison ministry in Cagayan de Oro. There, with a shoestring budget and the use of a vacant room at the archdiocesan centre, she started a similar candle-making project with a small group of former prisoners.

A year ago, I had the privilege of visiting the Philippines and seeing this livelihood project and meeting Haiti and her co-workers. In my conversations with them, I learned how this project functions as an important bridge between prison life and the outside world. It provides the workers with a weekly wage that prevents them from falling into poverty and desperation, thereby giving them much-needed stability as they continue to reintegrate into society.

The livelihood project also helps them to forge new and different kinds of relationships, which in turn strengthens their self-worth and facilitates networking that slowly opens up new horizons for them.

When the time came for me to say goodbye, Haiti and her co-workers asked if I had any empty space in my suitcase, and then presented me with a Paschal Candle to take with me back to Hong Kong. Since the season of Lent had just begun, I could not have imagined a more practical and meaningful gift.

A few weeks later, as my Columban companions and I gathered in our small chapel to celebrate the Easter Vigil, we found a new depth of meaning in the lyrics of the Easter Exsultet by the light of that Paschal Candle.

This is the night,
when Christ broke the prison-bars of death
and rose victorious from the underworld.

As I listened, I rejoiced in solidarity with Haiti and her co-workers in Cagayan de Oro because of our shared belief that the risen Christ, whom the Paschal Candle signifies, had freed all of us Christians from the prison of sin and death, and given us a new start filled with hope and promise.

Sadly, due to the sudden illness of a family member, Haiti Muller had to return home to Tonga late last year. However, Gilda Pates, the Prison Ministry Volunteer Coordinator for the Archdiocese of Cagayan de Oro, continues to oversee the candle-making project. Six other Columban Lay missionaries continue to minister in the Philippines.

Fr Tim Mulroy is Society Leader of the Columbans. Originally from Meelick, Swinford, Co Mayo, he was Regional Director in the US between 2012-2018. He worked in parish ministry in Japan from 1995 until 2002 and afterwards served in parish ministry at St Pius X Parish in El Paso, Texas. 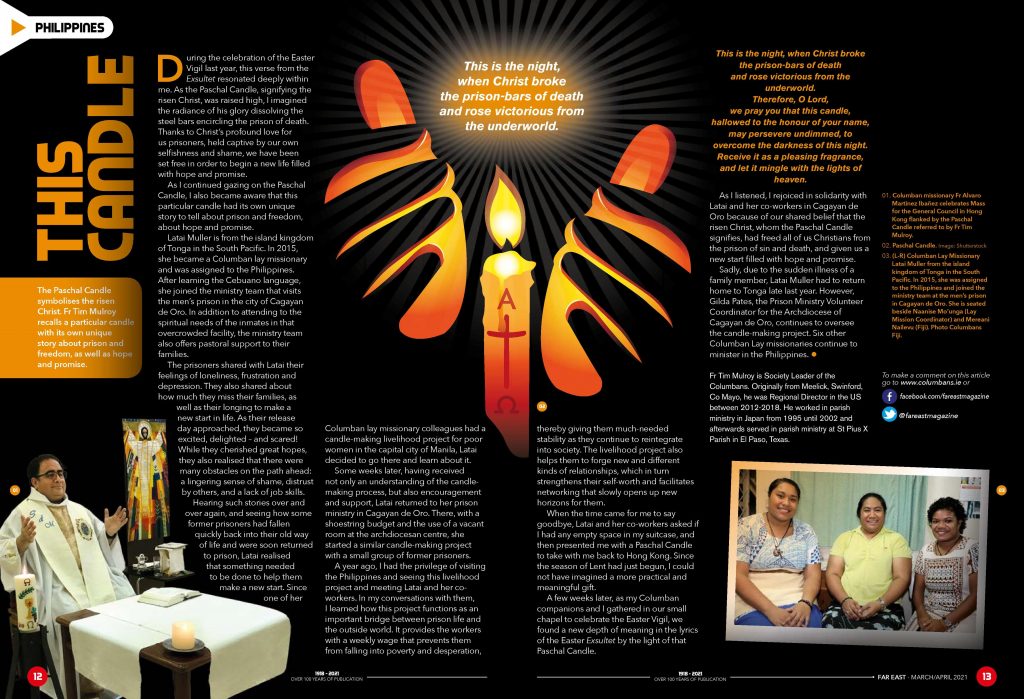