Although all Columbans may not agree with me, I think our life as Columbans has three important hallmarks.

Community
The first of these is our community life; despite living quite separately, we are a brotherhood. Many of us have lived alone in isolated places for years; the simple fact is that mission sometimes demands it. On the other hand, we Columbans are sometimes referred to as a ‘family’.

Although a few of us are in fact related to each other in the normal way as brothers or cousins, and some have had sisters who are Columban Sisters, most of us are not held together by a family connection.

Many of our relatives have been generous benefactors over the years, supporting Columban mission, not only by giving a son or a brother, but also by backing us financially and in numerous other ways. To say we are a family does say something about the way we live our lives and about the quality of our community life.

Though I have been in a position to meet nearly all Columbans, there may have been a few I have not met face to face. But for every one of them, there are others that I have met on multiple occasions in multiple places. All this meeting and meeting again means we build up a shared history with each other.

To know and be known, to accept others and be accepted by them, to respect others’ contributions and be respected for what you have accomplished, is all part of the Columban community experience.

A shared history means shared stories, some of them funny, some sad, some understated, some exaggerated.

It continues to be an important part of our training. I think the key to the exercises is listening.

Certainly, being on mission in a foreign land provides many opportunities for discerning the will of God, not only by listening to the Word of God in the scriptures, but also as revealed in the circumstances of our lives and the lives of the people among whom we are working.

Walking with the Poor
The third hallmark is a commitment to making the struggles of the poor our struggle. Readers of the Far East magazine know this commitment takes many forms in many places. Our work in Pakistan, for example, is with some extremely poor tribal people.

Even prosperous ‘developed’ countries like Japan and Korea were poor and struggling from the destruction of war when we first went there and continue to have pockets of poverty today. In Latin America, the Columbans gravitated to the poor areas on the periphery of the great cities of Lima and Santiago and have remained there year in and year out.

These three hallmarks remind us who we are, what we are about and, I hope, where we are going.

Fr John Burger is originally from the Philadelphia area. Ordained in 1973, he spent many years in Japan and Hong Kong and was Regional Director of the Columbans in the US until 2021. 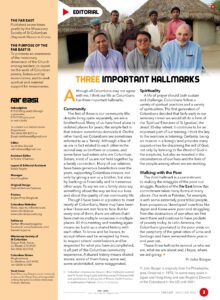 Published in the May/June 2022 issue of the Far East magazine. Please subscribe and support Columban projects with the most disadvantaged. Subscribe here: https://columbans.ie/product/far-east-magazine-yearly-subscription/