Columban Fr Joseph Houston pays tribute to Fr Leslie McNamara, former president of St Munchin’s College in Limerick, who as an AITECE teacher, taught English in China for a number of years.

When she heard the news of Leslie McNamara’s death, a former student of Nanchang University, China, wrote: “The most important day of my life was the one on which my dearest teacher as well as my best friend, Leslie McNamara, came to me. No matter where he is there’ll always be a special place for him in my heart.”

Leslie was a teacher with the Association for Educational Exchange from 2006 to 2013 and taught English in Nanchang University in the capital of the province of Jiangxi, China.

He was born in Limerick city in 1943. In 1960 he entered the seminary in Maynooth and graduated from the university with a degree in Science ‘with distinction’, a commendation seldom awarded.

As a student he published a book on semi-conductors with a fellow student, Gus Mc Evoy.

He was ordained priest in 1967 and was appointed to the staff of St Munchin’s College, Limerick, where, for thirty-five years, he was to fulfil the roles successively, of bursar, Vice-President, and President.

A colleague from those days described him as a true educationalist whose concern for his students went well beyond success in examinations. This friend takes delight in recalling Leslie’s dedication to training thirteen-year-olds to play rugby. Leslie loved the college and used return there on his holidays from China.

He had decided to take a sabbatical year on his retirement from the college, and several different people claim that they suggested to him that he should go to China to teach. Overnight, Leslie decided he would go.

Jiangxi is a predominantly agricultural and one of China’s poorer provinces, though with many famous locations, one of which is the mountainous area where the Taoist philosophy and religion originated almost two thousand years ago.

Another is the Jinggang Mountains where Mao Zedong took refuge in the 1930s when fighting the Kuomindang or Nationalist Party.

The capital city, Nanchang, was where the Chinese Communist Army, the People’s Liberation Army was founded in 1927. Until the beginning of the 20th century, students who were aspiring to positions in government administration used go to Nanchang each year to take examinations which tested their knowledge of the Confucian classics. Nanchang University, where Leslie taught is located there. It was founded in 1940 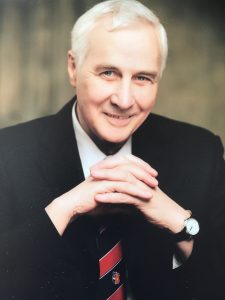 When Leslie arrived in Nanchang, he joined a group of other AITECE teachers who helped him to adjust to his new Chinese environment. The lack of preparation for his arrival left him a little bewildered, though he quickly recovered from that shock. A bigger shock was the classes he was to teach.

Leslie developed friendly relations with the other teachers and, when he got settled in himself, he was always ready to help them. He proved a faithful friend to one teacher who came under pressure from another teacher. He was helpful in different ways to new arrivals.

To one couple to whom he explained the intricacies of Chinese cuisine, he suggested, “You’ll always be safe with the broccoli or cauliflower dishes.” This couple, like other teachers appreciated assisting at Mass said by Leslie on Sundays in an apartment. The atmosphere recalled the catacombs in the early Church. He could observe the foibles of others but at the same time maintain a non-judgmental attitude towards them. 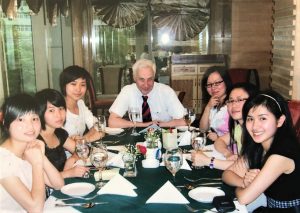 During Leslie’s time there, Nanchang University moved to a new campus which was very large and where the residential and teaching buildings were widely separated. As a result, he decided to buy a car. When a colleague commended him for his courage on starting to drive in China, he replied, “If anyone else can do it I can do it.”

Leslie adjusted to this chaotic aspect of China too. A teacher came to the conclusion that he was a fearless driver. Once when a few teachers were with him on a dual carriageway, they saw a car driving toward them on their side of the road, and they began to panic. Leslie reassured them that that was normal in China and he passed the car without any reduction of speed. In fact, he could pass out cars as good as any Chinese.

Leslie and his Students

Leslie was very successful as a teacher of English. He had a friendly attitude to his students and was fair in his dealings with them. He tried to reach out to all of them not only the high-fliers. His dedication to them was shown in many ways, not least in the amount of time he gave to them. He spent long hours coaching students for speech-making and debating competitions.

He was a regular attender at a weekly English Corner where students gathered to speak English with a view to improving their skills. It was a bonus for them if teachers attended these meetings. Here too, Leslie was helpful to new teachers by guiding them on how to field tricky personal questions from the students.

He was generous also in contributing to his students’ studies by raising money in different places which made it possible for some of them to go to Ireland for further studies. He also provided accommodation for them in Ireland. All this was done without other teachers knowing about it.

He helped his students grow at the personal level. One student recalls the many meals she shared with Leslie, where the conversation ranged over life and death, love and God.

Many of Leslie’s students did well in provincial and national competitions in speaking and debating. One student gained second prize in a national speaking competition and first in a national debating competition and was given the title of the ‘best debater.’ The prize for this was a trip to Italy and participation there in a three-week debate training camp. Although this student lacked self-confidence, Leslie saw her potential and was able to inspire her with faith in herself. One of the reasons for Leslie’s success as a coach for these competitions was his wide culture, extensive interests, and knowledge of international politics and economics. 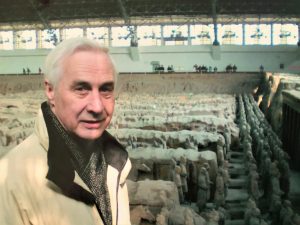 The success of his students in these competitions not only brought them recognition, but also raised the profile of Nanchang University, much to the satisfaction of the authorities, who awarded Leslie the Lushan Prize for outstanding service to education.

Return to Ireland and Death

Leslie returned to Ireland in 2013. From 2016 his health began to deteriorate. A lifelong friend recalls how he carried his illness “with great dignity and resignation, happy to embrace [the Cross].” As the end approached, he commented to this friend, “I have had a wonderful fulfilling life, I have loved being a priest, and I am not afraid to die.”

He was admitted to Park Nursing Home, Castletroy, Limerick in 2020. He died on 5 February 2021 and he was buried in Mount St Lawrence Cemetery in Limerick.

I will end with some of the many messages of condolence sent by grief-stricken former students of Nanchang University when they heard of his death, and a tribute in the form of a Biblical quotation by a colleague in China.

I think of him every day with a bittersweet feeling (Student 1).

I will never forget you and the days with you in Nanchang and Ireland (Student 2).

An excellent teacher, a wise person, and a true gentleman (Student 3).

Thank you, Leslie, for being a part of my life that I will never forget (Student 4).

We are all truly grateful for all that you did for us and the fond memories we have of you (Class 043, English Majors).

A tribute by a colleague of Leslie’s in Nanchang: The memory of the righteous is a blessing (Proverbs, 10, 17).