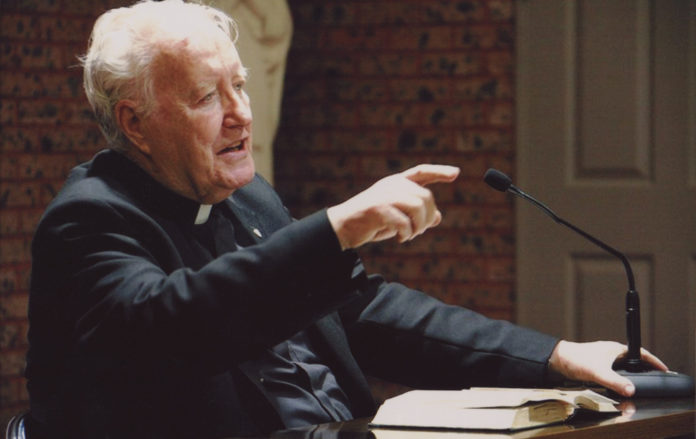 Tributes have been paid to Irish Columban missionary Fr PJ McGlinchey who died on Tuesday 24 April 2018 in South Korea. He was 89.

News of his death came as Highland Radio prepares to air a documentary on his tremendous work in transforming the lives of the people of Jeju Island.

‘A Little Piece of Home – Donegal to Cheju’ can be heard on Highland Radio on Monday 7 May 2018 at 6pm. The programme was compiled by Brian Kenny and produced by Columban Fr Malachy Smyth.

The Irish Embassy to South Korea noted Fr McGlinchey’s “more than 60 years of dedicated service to the people of Jeju island”, South Korea’s largest island, which is located 70 miles off the mainland.

A recipient of Ireland’s and Korea’s Presidential distinguished service awards, the Irish Embassy said Fr McGlinchey “leaves behind in Jeju a transformative legacy of farming development and the Isidore Development Association including a hospice, a nursing home, a youth centre and a retreat centre.”

On Friday, Fr McGlinchey will be laid to rest in Jeju.

Fr Cyril Lovett of the Columban Regional Council in Ireland described Fr PJ as “a charismatic character, a pleasant personality, and a born leader.”

“We mourn the death of an extraordinary Columban who spent more than sixty years on the island of Jeju. The people were extremely poor, and the farmers worked the fields with wooden ploughs and oxen. PJ helped them to improve their lands and their livestock.”

He highlighted how over the years, Fr PJ was helped by many young volunteers from Scotland, Ireland, Australia and New Zealand.

“He is best known perhaps for the ways in which he helped the material development of the people of Cheju, but he was always a pastor first and foremost, spreading the Good News of Christ’s Kingdom by his own activities,” Fr Lovett said.

“He will be happy that his final resting place will be among the people whom he served so generously.”

Deputy Pat the Cope Gallagher was also among those who paid tribute Fr McGlinchey, a native of Co Donegal.

Speaking to the Donegal Democrat newspaper, Deputy Gallagher said he had had “the privilege” of meeting Fr PJ and witnessed first-hand the tremendous work carried out by him.

“Words will never best describe how the islanders felt about Fr P.J. For them he was the saviour of the island and the man who made life possible for thousands of people on the island.”

“In the long history of missionaries from our small country, there have been numerous exceptional men and women, but when history will be written of their times in Korea the name of the Late Fr PJ McGlinchey will be foremost amongst them.” 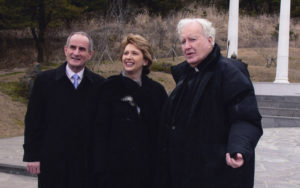 “A man who may have been posted miles from his native Donegal but in reality made a Donegal out of the Island of Jeju – using the spirit of the co-operative movement and the meitheal,” Deputy Gallagher said.

She said he had brought “a unique blend of spiritual leadership and an array of practical initiatives to help lift thousands of Jeju citizens out of poverty.”

Fr PJ McGlinchey was born in Raphoe on 6 June 1928. He was reared in Letterkenny before entering the Columbans in Dalgan Park. He was ordained in 1951 and was then posted to the Diocese of Kwangju to serve in Jeju.

At that time the Korean peninsula was just recovering from a horrific three-year war and both the economy and society were utterly devastated by the destruction of that conflict.

He took over the pastoral care of an island the size of Co Donegal but with a Catholic population of just 25 people out of an overall island population of 40,000 people.

There was little or no real infrastructure, no health services, little access to education and no means to generate income or employment.

At the island’s centre is Mt Halla, an extinct volcano, whose slopes, rising to 6,349 feet, are covered with rocks, forest and scrubby grass. Jeju’s soil is red lava, porous, and unable to retain water. Therefore, despite its moderately heavy rainfall, it lacks a natural permanent water supply.

When Fr PJ arrived in 1952, Jeju’s people were among the poorest in South Korea, trying to eke out an existence by working the fields with wooden ploughs and oxen.

He undertook immediately to improve the lives of the people.

Fr McGlinchey dispensed food and clothing provided by Catholic Relief Services but soon became convinced that it would be better for the people to become independent. “……he realised that something had to be done for the farmers since preaching would not feed them”. 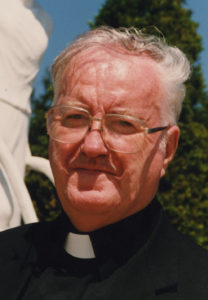 50,000 hectares of land stood idle in the centre of the island.

His model of development and profitable farming encouraged the use of underused farm land and new farming methods. He established St Isidore farm which cultivated pigs, sheep, cows and more recently horses at its stud.

He helped establish a textile factory which employed up to 1,700 women at a time when jobs on the island were scarce.

He also set up a credit union which changed the economy of the island and helped the citizens break free from their poverty.

He singly pioneered improving the farming practices and yields from the island farms, drawing as he did from the experiences of his late father who was a vet and an agricultural advisor back in Donegal.

He introduced new breeds of cattle, sheep and pigs – he made existing farms more productive by encouraging co-operation between farms. He also arranged for the purchase of a co-operative farm comprising of over 2,300 acres – these lands were subsequently sublet to newly married couples in an attempt to better their start in life together.

In the next 10 years of his missionary life he put in place new healthcare facilities, school buildings were to follow and eventually a new church building for the island.

Within his first 15 years of his life on the island he had provided a complete social, economic and sustainable existence for the entire island, this at a time when the South Korean Government were struggling to establish basic services on the mainland.

Fr McGlinchey became something of a national celebrity. On 5 June 1972, President Park Chung Hee bestowed on him the Order of Industrial Service Merit, Stone Tower, “in recognition of his contribution towards helping promote the nation’s livestock industry” and asked him to address the country’s Economic Planning Board to discuss St Isidore’s projects. 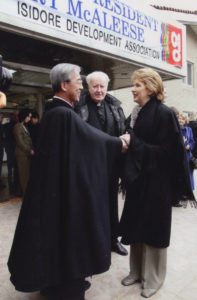 The government also made a half hour documentary television film of his work entitled, “The Sheep and Pig Farmer,” and ran it twice, nationwide, during the month of September.

Fr McGlinchey gave the money which accompanied the award (US$ 1,850) to the IDA clinic which the Columban Sisters had started in 1970 and which now treats some 17,000 persons annually.

He was also recognised by the Irish Government for his lifelong commitment to the Island of Jeju. Though he accumulated numerous awards in his lifetime, for Fr PJ the only reward worth recognising was the increasing prosperity of his people.

Thanks to the efforts of Fr McGlinchey and other Columban missionaries who came later, there are now 4,500 Catholics in the parish in Jeju which has been divided into two.

With thanks to the Patsy McGarry of the Irish Times, Joe Little of RTE and the Donegal Democrat.