An exhibition of photographs showing stunning images from the Turas Columbanus/Columban Way pilgrim route will open in Dalgan on Sunday as part of National Heritage Week 2019.

The photo display shows scenes from Tara, Bective, Bunclody and Bangor in Ireland as well as the Columban Way in France, Austria, Switzerland and Italy. 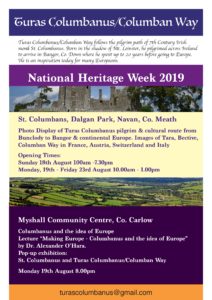 Speaking to Columbans.ie about the exhibition, Derry Healy said the theme of National Heritage Week 2019 is ‘Pastimes/Past Times’.

He said the exhibition was organised by the Friends of St Columbanus and its purpose is “to give the viewer an insight into the route from Mount Leaner to Bobbio.”

“It gives an insight into the magnificent scenery of this pilgrim journey that follows the footsteps of the Irish monk and missionary St Columbanus. With images of Mount Leinster on the Carlow/Wexford border, the Hill of Tara and Bobbio, the exhibition is a compilation of photos that were taken in recent years as a visual travel log of what has been achieved to date.”

“It presents the European dimension of the Columban Way that has gathered momentum in recent years through the interest and commitment of those who have become involved in the project,” he explained. 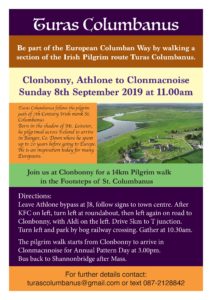 Born in the shadow of Mount Leinster, he pilgrimaged across Ireland to arrive in Bangor, Co Down where he spent up to 20 years before going to Europe. He is an inspiration today for many Europeans.

Separately Turas Columbanus has announced a 14km pilgrim walk on Sunday 8th September 2019 in the footsteps of St Columbanus.

The walk starts at 11am from Clonbonny in Athlone and arrives in Clonmacnoise for the Annual Pattern Day at 3pm.