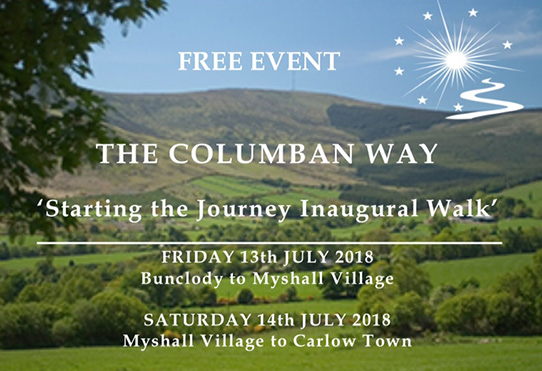 An inaugural walk which highlights St Columbanus’s association with Carlow and Wexford begins on Friday 13 July and will continue over the weekend into next weekend when stage two takes pilgrims to Dalgan Park, home of the Columbans in Ireland.

The initiative is part of a collaboration between the Columbans, Carlow County Council, Muintir na Tire and others. 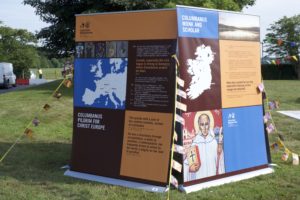 The medieval saint is closely associated with Myshall, Co Carlow and the Mount Leinster area. His biographer, Jonas, writing three years after St Columbanus’s death in 615AD, has written that the missionary was born in the shadow of Mount Leinster.

That could be either Myshall or Bunclody. Walk organisers have decided to begin on Friday in Bunclody.

“This is the first year that we have done it on a more professional basis where we have the stakeholders – the local councils and the community development groups and the hillwalkers all involved,” Derry Healy explained.

The 1400th anniversary of St Columbanus’ passing in 2015, brought renewed interest in his enormous legacy in Ireland and Europe. Among the initiatives it sparked was one to plot his original walking route from Myshall to Europe. 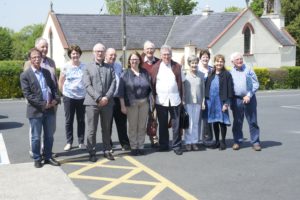 The inaugural walk on Friday of the Turas Columbanus traces a route from Bunclody to the Nine Stones at Mount Leinster and onwards to Myshall on 13 July culminating with the opening of the paths project at Tobar Bhride at 5.30 pm on Friday evening.

Completed under the Town and Village programme, the pathway links the Adelaide Memorial Church to the Catholic Church of Exaltation.

On Saturday morning walkers will depart from Myshall Community Centre at 10am to reach Bagenalstown at 12 noon and thereafter along the Barrow towpath to Carlow.

A talk on St Columbanus and his legacy and relevance to everyday life will take place in the Chapel, St Patrick’s Carlow College at 7 pm on Saturday evening. 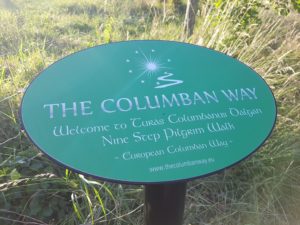 The second walk of the Turas Columbanus takes place a week later from 21 – 22 July. It commences at Bective Abbey in Co Meath on the River Boyne and continues to the Hill of Tara and from there proceeds into Dalgan.

In Dalgan Park, pilgrims can undertake the Nine-step Pilgrim Walk, which is nine stations dotted around the vast parkland with quotations from St Columbanus himself.

According to Derry Healy of the Association of Friends of St Columbanus, nine step pilgrim walks are planned for each major centre associated with the saint, such as in Myshall, as well as the one already established in Dalgan and another in Bangor, Co Down. 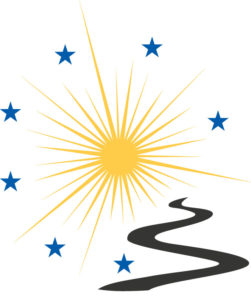 He underlines that there is an open invitation to the communities through which the Turas Columbanus route runs to get involved.

The more community involvement there is, the more likely the pilgrim treks are to be resourced.

Those intending to undertake any part of the Turas Columbanus pilgrim walk are advised to log on to the Facebook page and register because not only will they get a passport documenting their walk but, “it also means that they are covered by insurance which is a big issue,” explains Derry Healy.

At a meeting in Carlow in June to launch the Turas Columbanus walk from Bunclody, all the stakeholders agreed that the walk, though a great product for tourism, wasn’t a recreational walk. 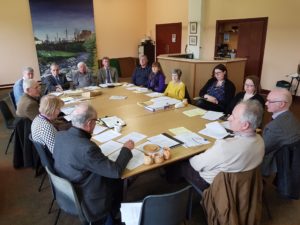 “The big difference between these types of walks and what we are proposing is this is a walk similar to Santiago de Compostela where you have a purpose in going. The purpose is trying to get a bit of time for yourself and discover what you are about and at the same time connect with the environment. People can do short distances along the route but the important thing is their mindset.”

Asked about the funding for the initiative, Derry Healy explained that different county councils have given a contribution to the project, as have the Knights of Columbanus and the Columbans.

For more information on the walk, registration times and map details visit www.carlowtourism.com/columbanway or visit https://www.facebook.com/FriendsofStColumbanusROI/