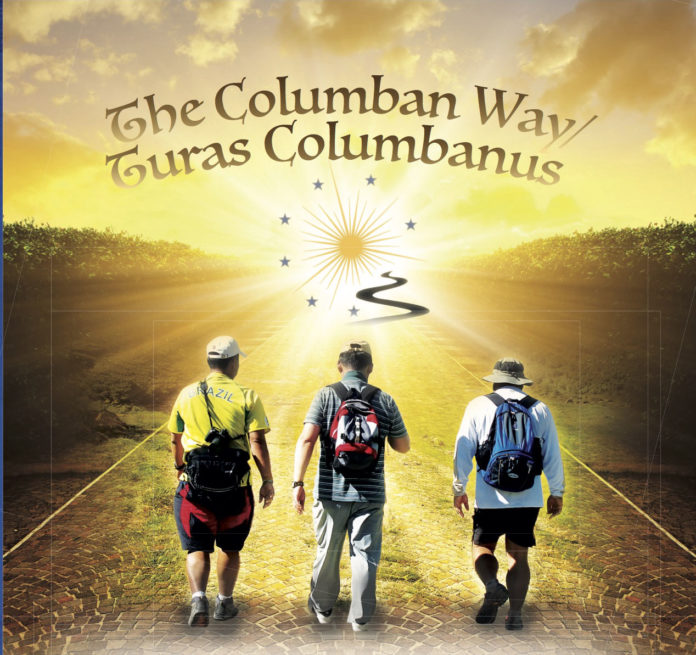 In the coming year attention will be focused on mapping the route from Kildare to Clonard and from Cleenish to Armagh and Downpatrick.

The creation of the Association of Friends of St Columbanus in 2017 has ensured the involvement of a group of people who are committed to the project and have their feet firmly on the ground.

The organisation is made up of members of County Councils, tourist boards from Wexford, Carlow, Kildare, Meath, Down and Fermanagh, local community groups, and the Knights of St Columbanus.

The Knights of St Columbanus have supported the development of the project through the mapping process and the defining of a route, as well as the promotion of the pilgrim walks and financial accountability.

Described as “a creative and inspirational project”, it invites peoples of all walks of life to rediscover some aspect of their faith and live it to the full in an Ireland and Europe in the 21st Century. 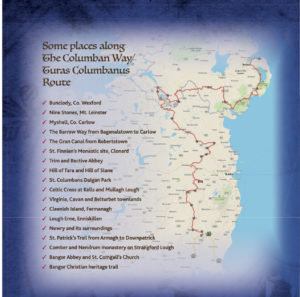 Turas Columbanus finds its origin in the travels of the sixth century Irish monk, missionary and pilgrim, St Columbanus.

Columbanus travelled more than 3,000kms across Ireland and Europe. According to his biographer, Jonas, he was born in the shadow of Mount Leinster on the Wexford/Carlow border in the year 543AD.

He became a monk in the monastery of Bangor, Co Down under the Abbot St Comgall for more than 20 years before he crossed the Irish Sea with twelve companions, among them St Gall from whom the city of St Gallen in Switzerland takes its name.

Columbanus founded monasteries in Annegray, Fontaine and Luxeuil-les-Bains in the foothills of the Vosges Mountains, in Eastern France; he founded a monastery in the town of Bregenz in Austria on the banks of Lake Constance, and finally in the year 613 a monastery in Bobbio in Northern Italy, some 120km south of Milan.

This pilgrim route begins in Bunclody, Co Wexford, crosses Mount Leinster to Myshall, Co Carlow and continues through the midlands, to Cleenish Island in Co Fermanagh and Bangor, Co Down.

It marks the first phase of the European Columban Way which has its final destination: Bobbio, the resting place of St Columbanus.

This pilgrim route connects ancient pilgrim sites, villages and towns across Europe and enables communities from different heritages, cultures and languages to link up with one another, learn from one another and forge links for a better appreciation of our European identity.

It is a north-south pilgrim trail across the whole island of Ireland that brings communities of different faiths and cultural traditions together extending from Ireland’s Ancient East, Kildare, the Boyne Valley to Cleenish Island, Strangford Lough, North Down and Bangor.

Columbanus himself was the first to coin the phrase “totius Europa” (the whole of Europe) in an effort to bring communities together at a time of turmoil and conflict.

Many centuries later political and religious leaders in Europe came together in the aftermath of two world wars to start building a lasting peace and safe environment for all.

Robert Schuman, French Minister for Foreign Affairs in the 1950s and one of the founding fathers of the European Union, described St Columbanus as “the patron saint of those who seek to construct a united Europe”.

The Columban Way/Turas Columbanus is much more than just walking a pilgrim path.

Based on the writing and legacy of Columbanus, it is not the geographical destination that is the all-important goal but rather the journey itself, the engagement with communities, the building up of a community spirit along the route, the interaction among peoples through educational and cultural projects, the caring for the environment and the coming together of likeminded people to explore the relevance of Columbanus for the Europe of the 21st century. 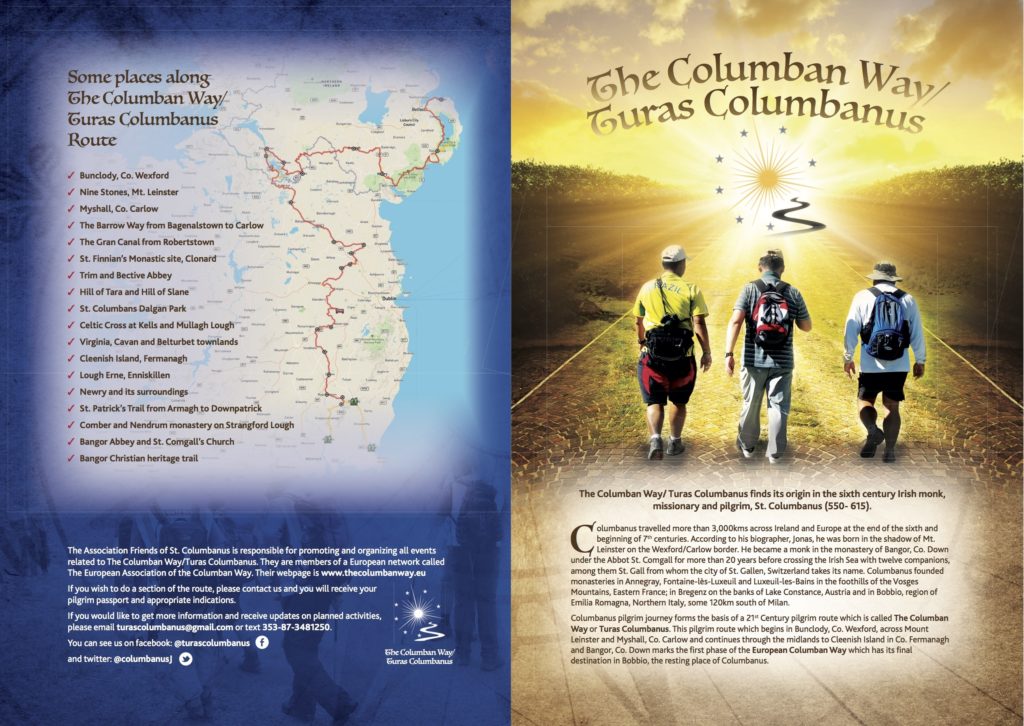 The Columban Way/Turas Columbanus invites everyone to join in the journey. The specific pilgrim walks celebrate our unity in diversity as we embrace and welcome the stranger and create the conditions for peoples from other cultures and religious traditions to make their home among us.

As we plan for 2019, we look forward to inviting family, friends, parishioners, community group to take part in the organised walks from Bunclody to Bangor.