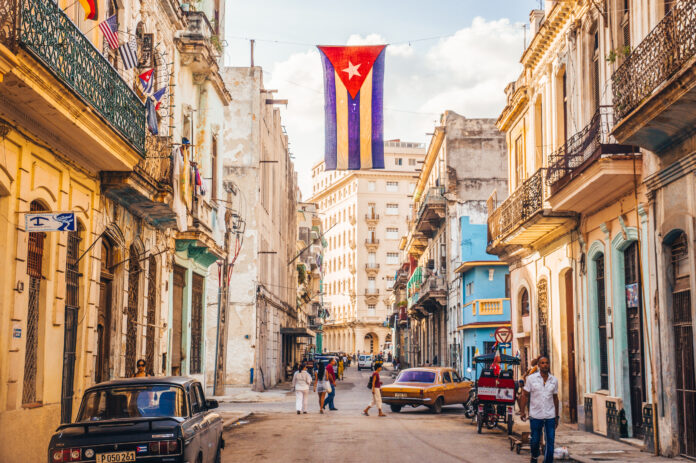 Cuba is in the midst of an economic crisis. Sanctions and the Covid-19 pandemic have led to deteriorating living conditions, electricity outages and acute shortages of food and medicine. Fr Bobby Gilmore recalls the day when Cubans Juan and Ada turned up on his door in Jamaica.

Neville Budhai is a Cuban refugee living in Montego Bay. He studied art in Europe in the 1960s. Over the years he has been the focal point for Cubans arriving not just in the Montego Bay area but in Jamaica generally.

His most recent arrivals were a young couple Juan and Ada. They rang the rectory bell at about 6.00am. Generally, during weekdays there is not much activity around the church as Jamaicans are weekend Christians. They put all their efforts into a real lively celebration on Sunday. So, I wondered who could be there at this hour of the morning.

Seeing the two young people looking a bit tired and dishevelled, I unlocked the grids, let them in and offered them breakfast. They both spoke impeccable English so communication was not a problem. They arrived at Montego Bay airport the previous evening and met some stranger at the airport who gave them accommodation and food for the night before directing them to Mr Buddhai’s house.

As I prepared breakfast, they began to tell their stories. Juan had two degrees accountancy and engineering. As a young student he wrote poetry and acted in dramas in his school and neighbourhood in Havana. Some of the plays he acted in, as was the poetry he wrote were deemed to be subversive and he ended frequently being detained. About the age of eighteen he made up his mind that some day he would escape.

He had learned a lot about Ireland in school, listened to Irish music and read Irish literature. He was enamoured about Ireland. So, he chose Ireland as his destination.

To generate money for his eventual escape he began to work and save local currency. Whenever he got the opportunity, he exchanged local currency for United States dollars. Then he started his own business rearing chickens and rabbits in his parent’s backyard. When the chickens and rabbits matured, he took them out of town to sell them in places where he would not come under police notice. As time went on, he built up a clientele and saved the money he made from his sales.

He graduated from university in engineering and then in his spare time completed his course in accountancy. Watching the Aeroflot plane arriving and departing to and from Shannon kept his dream alive that one day he would be aboard on the way to freedom. All he needed was the money and now that he moonlighted as an accountant he felt that he would not have too long to wait.

However, his regular job as an engineer took him to hospitals to repair and maintain equipment. In one of the hospitals a young lady, Ada, began to attract his attention. It was mutual and they fell in love.

As their relationship grew deeper it gave them the freedom to share and trust each other. Juan shared his aspiration of eventual escape with Ada. Happily, he discovered that she was thinking along the same lines but there were many obstacles, money being the primary one.

Ada had recently qualified head of her year as a medical doctor in Cuba. She was now engaged in research of the retina. She saw her future in a wider world that allowed her the freedom to pursue the ideals she set herself in the arena of medical science and research. Both Ada and Juan realised that escape from Cuba meant that the foreseeable future they would be separated from their parents, family and friends in Havana.

However, as they were now confronted with a dual departure to Ireland it would take more time to raise the money required for such an adventure. This gave them both time to personalise the dislocation from family and friends and the risk involved in the steps they were taking into the unknown. After much discussion they decided that it would take an inappropriate length of time to raise the rest of the money needed to get to Ireland. So, they altered their plans.

They discussed their situation with a few people they felt they could confide in. An alternate option had to be thought through. It was then that they came up with the idea of going to Jamaica and using it as a transient point to reach either Ireland or the United States. Their options were limited not only by resources but by the number of possible destinations arising from the few international departures from Havana international airport.

There were few regular flights to Jamaica, but it was their best option. Their financial resources were just about adequate to purchase the ticket that would take them to Montego Bay and freedom. This they managed successfully and here they were having breakfast.

Here were two bright, talented, healthy, energetic and highly skilled young people looking for an opportunity to use their multiple talents. These two people and many like them are an asset to the country that receives them. They represent the loss of an asset for the country they leave. But they are a challenge to people like me; to enable them to find an opportunity to offer their ingenuity and talent.

However, in a situation like this it is important to realise that there are many people willing to help. This was particularly true in Jamaica. I called a few people, and they gave them temporary accommodation. Later in the week a man offered them the use of a vacant apartment. 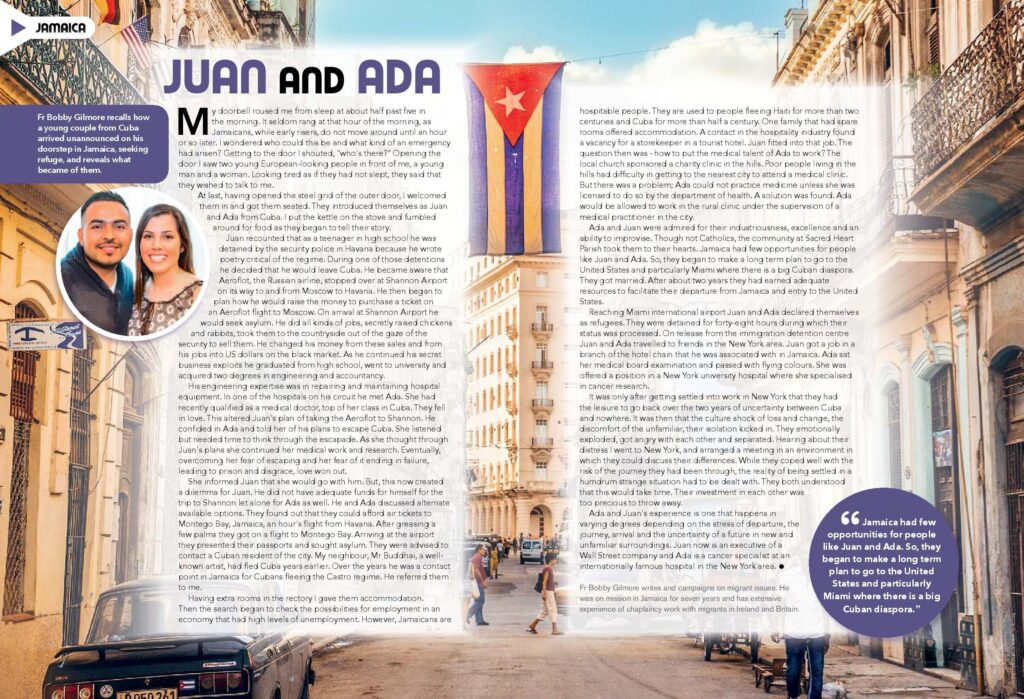 The next task was to find employment for Juan and Ada. This was where red tape, obfuscation and bureaucracy clicked in. Here were two talented, professional people that were badly needed, one in the medical sector and the other in the hotel and tourist business.

I was responsible for a medical clinic in a rural area that was hoping to get a doctor from Ireland. After months of searching there was no response from Ireland. Also, we put in train the possibility of them being given residence in Ireland where at that time there was a great shortage of skilled and professional people. The result from Ireland was indifference and indecision. Why are small island populations that have been denuded by emigration so indecisive about accepting skilled people who are assets to society?

Anyway, I suggested that Ada might serve at our charity clinic. After a short orientation with a local doctor who would supervise her work and sign prescriptions, she started work. In the meantime, they were given permission to remain in Jamaica due to the intervention of the local bishop with the appropriate government office. Juan got a job as stores manager at a large tourist resort. They were most appreciative of his work and ingenuity.

In a short time, he purchased an old Volkswagen. If there was an emergency shortage of local produce, he had no problem of hopping into the car to hit for the hills to look for the needed items. This kind of initiative was most appreciated by the hotel management.

The people attending the clinic were delighted at the arrival of this young energetic Cuban lady. She was most welcoming and had no difficulty in legging it out into the hills to visit housebound patients. She was innovative in disseminating medical information that enabled people to cope in preventing illness. She kept trying to interest the local medical association in getting registered.

A few years previously she would have had no problem as Cuban medical degrees were recognised in Jamaica. But this recognition was withdrawn due to external political pressure on the government of Jamaica.

This implied acquiring sufficient cash to purchase airline tickets and to smooth a passage onto a Miami-bound flight. In the meantime, they decided to get married.

After months of waiting, they disappeared off the scene. Obviously, their departure was imminent and to keep it secret stayed away from their usual social connections. Then after a few weeks I got a call from Miami. They arrived and were, as was the procedure, detained by immigration authorities. After a few days they were given new residency papers and set free.

There were friends waiting to receive them in the Cuban community where they stayed to recover from the highs and lows of the previous two years of travel, travail, suspense and waiting. Their years of being “underground” took time to process mentally and emotionally.

It took them time to come to grips with having to stop looking back over their shoulders and start looking forward with a focused plan.  The tension arising from the multiple options that the new horizon offered were almost as stressful as the stress they left behind. However, they set a priority of finding work in their fields of expertise. Juan found a job in a branch of the hotel chain he had been with in Jamaica.

Ada applied to sit the medical board examination. She passed with flying colours. Then she also took up her unfinished research of the retina at Columbia University.

As I watch public demonstrations against the Cuban government sanctioned for years by United States embargos and the repression of public opinion seeking a better Cuba, Juan and Ada come to mind. It is sad to see a country again lose talented people like Juan and Ada take risky journeys in search of a better life. Juan is now a Wall Street executive and Ada is the health officer in a neighbouring state. One country’s loss is another gain. We are aware of that in Ireland.

Gradually, the disparate pieces of their lives began to fall into place. At last, they had their own accommodation. As they developed a sense of location and took time to reconnect with other Cubans, they were able to gradually extend their social boundaries. A greater awareness of opportunities arose in areas where their skills were required with greater reward moved them into a wider world of work.

The freedom of the United States offered them opportunities to visit relatives and friends and being young had the energy to take long trips in their newly purchased car. All these things that we take for granted were for them a realisation of dreams, gaining of confidence and the formation of a community of friends that they could be in solidarity with.

A sense of belonging and being at home made them feel more secure as their settlement in a new land began to take root.

The United States and a few other countries are conscious of the talent, energy and creative vitality that young immigrants possess. As a result, Ireland and other EU member states wish to control migration rather than manage it. Europe has a tradition of institutional racism, a leftover from colonialism that blinds it to the possibility of the contribution people of different cultures. This attitude of exclusion denies Europe’s own claim to have made a contribution to history in the dispersal of its people through colonialism and past migrations.

A new common immigration policy cognisant of the needs of society and commerce in Europe will have to address this deficit in relation to the assets that outsiders bring.

Apartheid should have no place in a global interdependent system.