Home News Update on the plight of Typhoon Vinta’s victims 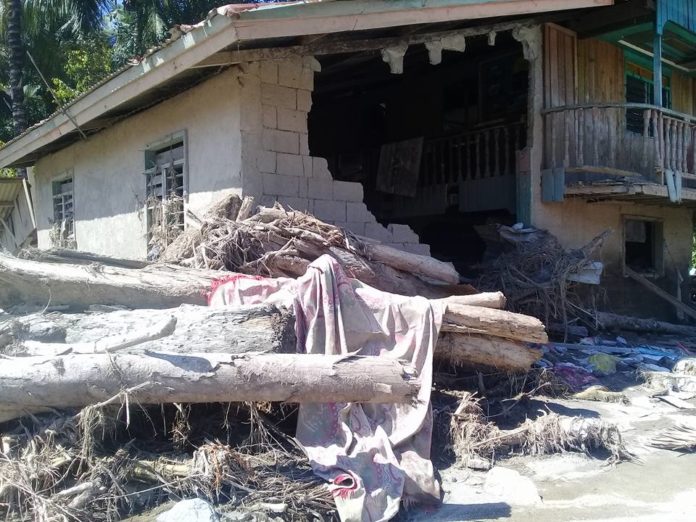 Virgenia O. Vidad provides an update on the plight of the victims of Typhoon Vinta in the Philippines, a month after it hit the Province of Lanao del Norte, snatching away so many lives and leaving a trail of destruction in its wake.

It was a terrible incident in Pansur and Mindalano, Salvador, Lanao Del Norte last 22 December 2017 that left hundreds of people dead including children.

In Mindalano, which before the Typhoon had 309 households, 49 people died including children. Pansur saw 23 people killed while another eight are still missing, four children and four adults. 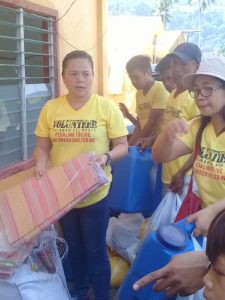 The Pedalling to Live and Green Shelter staff and volunteers went back to Pansur and Mindalano yesterday, 10 February 2018 to distribute rice, gallon, mats, sandals to 108 families who survived Typhoon Vinta.

After the typhoon struck, the group started to visit the area and did an assessment of peoples’ needs. The local government of Lanao has also been working to help them rehabilitate their lives.

I spoke to a survivor in Mindalano and he shared with me how he survived the flood along with his wife, who was nine months pregnant.

Mosab Mandar is 19 years old and married. He works as labourer in the farms of Mindalano, Lanao del Norte.

When he heard a very loud sound coming from the mountain he hurried home, which is two kilometres away from where he works. But as he made the journey, a huge deluge of water flooded into the area and all he could do was shout to his wife to try to warn her of what was going on.

By the time he reached to his house the water level was very high and was threatening to wash it away. 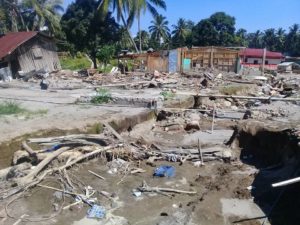 Together with his wife he tried to climb from their house to another, but when they had managed to climb onto the other house, suddenly it too began to wash away.

Holding on to each they began to swim while a man shouted at them telling them to climb on to the floating logs. But they couldn’t do it because Mosab’s wife was too exhausted. So, he carried her on his back while he tried to navigate the downward flow of water.

Coming across a coconut tree which was standing firm, they decided to cling on to it and transfer into a cemented house.

Then his father-in-law told them to get out of the house but Mosab’s wife was now wounded and so he decided to stay because he had decided he would prefer to die together with his wife.

He saw many people shouting for a help and then after a few minutes they are gone, washed away by the huge flood.

Someone used a rope to create a line between two coconut trees so that people could make their way to upper ground. 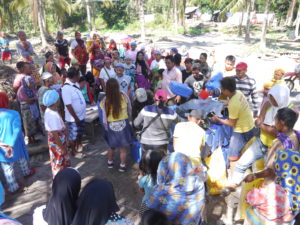 Mosab is thankful that he and his wife were able to survive this dreadful incident but sadly their baby did not survive. The baby was stillborn, no doubt due to the traumatic events and the toll it took on his wife.

Big logs, uprooted trees and huge boulders were carried by the water and destroyed houses and even hectares of farmland.

In the aftermath of this horrific incident, the local government in Lanao is trying to facilitate all the victims, but due to limited resources the supply of food is unstable while their farmland was destroyed.  The people are still in trauma and the children sometimes do not want to go to school.

They need livestock for their livelihood while they are trying to clean up their farmland so that they can plant corn, rice and vegetables as a source of living.

We would like to thank to all benefactors, supporters of the Far East magazine and Columban Fr Oliver McCrossan who have all extended their help of the typhoon survivors in Lanao Del Norte.  Through your financial support we have been able to start helping people recover their lives. 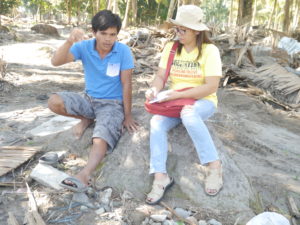 The Pedalling to Live and Green Shelter Inc. and Fr McCrossan, together with some volunteers, are working closely with the those worst affected by Typhoon Vinta.

If you would like to help Fr Oliver McCrossan and Virgenia O. Vidad of the Pedalling to Live and Green Shelter project in their efforts to support those impacted by Typhoon Vinta, please send a cheque to: