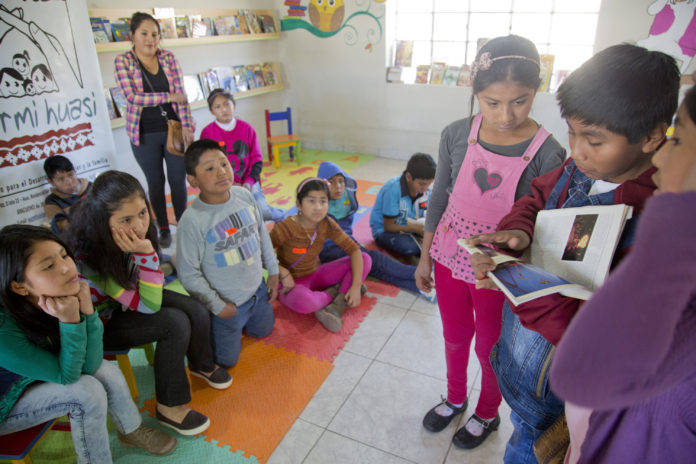 Warmi Huasi is a small civil association (NGO) I set up with others twelve years ago to accompany families, and especially children at risk, who live in situations of poverty. The name Warmi Huasi comes from the Indian Quechua language meaning ‘Women’s House.’

We began in 2006 in the parish of Our Lady of the Missions, where I work as parish priest, with health and non-violence programmes supporting families, especially women, in the area. Then I was asked to visit Lomas de Carabayllo, some fifteen miles north from the parish, by the government’s Human Rights Office, to help interview people displaced by the violence in Peru of the 1980s and 1990s for the Truth and Reconciliation Commission. That was when I got my first look at San Benito, the largest of the townships in Lomas de Carabayllo, where many lived in extreme poverty.

San Benito was a settlement which started up some 21 years ago on the foothills of the Andes, on the extreme northern side of Lima. It has now developed into a township with a population of 12,000 people. When the Warmi Huasi team and I helped in the interviews with the displaced, we were moved by the plight of the people, and decided to run two projects responding to the greatest needs of the families, that of malnutrition of young children and family violence, these were the years 2009 to 2011.

Over these three years we got to know the community well, especially the women and key local leaders in the townships. When at the end of 2011 we evaluated our work with the community and shared our thoughts on what would be the most important need to work on in the following years. What we heard back, especially from the women, was the same thing over again: “the children, the young children, we have to do something about the children, they are at risk.”

In San Benito, they were saying, there is a large number of families where the mother is the main breadwinner or where the father works far away from home. These women have to go out each day to make enough money to cover their families’ basic needs. This results in young children being at risk, left alone to fend for themselves and even looking after toddlers by themselves.

The risks faced by the children were fivefold:

Where were we to start, in the effort to accompany the working mothers in reducing the risks faced by their young children? 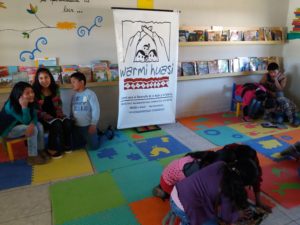 We began working with the mothers, organising workshops on self-esteem, basic first aid for their children, healthy diets and child protection. But we soon found out that the mothers had little time for such orientations, mostly because they lacked time or were so tired they had little energy for anything more than just survival.

Six years later, we are looking at some amazing results.

We began by setting up homework clubs in the township, in a chapel, a soup kitchen and two community halls, as safe places for the children to be after school and where they would be helped with their homework. These township organizations took on, and still do, the responsibility of hosting the clubs and providing mothers, taking turns, to accompany the children.

Warmi Huasi found the money to hire teachers to work with the children three afternoons a week. Each year 80 children attend. Throughout the years hundreds of children have passed through the homework clubs, all of them passing their end of year exam. In the summer break we run classes for children who have failed the academic year. We get them through the re-sit exam, so they can move up a year, about 50 children each year.

We also set up a play centre. The township leaders gave us the land, and we built a simple plywood hut, in which toys and games were placed, many came as donations from the parish in which I work, and volunteers accompanied and still accompany the youngsters. On average 60 children use the centre in the afternoon during the week.

Then, we opened a reading club in the Warmi Huasi centre in San Benito. Over 70 children attend every Saturday, and they are queuing up before starting time to get in to read. Some children have read over one hundred books, and younger children are helped in their reading as well. Over the years hundreds of children have had a safe place to be in and the chance to read and dream of a better future. 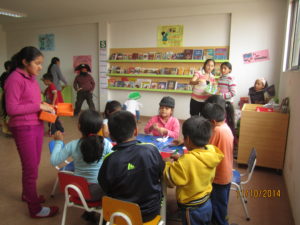 The local state school asked us to help set up a reading club in their school which has over 1,000 students of primary and secondary age. We had to build the library first, through donations from benefactors, and books were donated from the parish in which I work. We also prepared the teachers to run the reading club.

We noticed that some of the children in the homework clubs and reading club had speech difficulties and a number also had posture problems. So, we set up a therapy club, with the help of physiotherapists from the local municipality, and the club is in great demand three afternoons a week. Average attendance in a week can be as high as 90 children.

Things did not stop there, and we invited the children to come together to further their personal and civic formation with themes on self-esteem, children’s rights and organisation skills such as public speaking, how to run meetings, how to elect their leaders and a monthly play day for all the children of San Benito. Then they got into analysing what were the risks in the township for children and worked on a plan of action to reduce these risks. In this task they were helped by our social worker and child psychologist.

In 2016, these children formed themselves into a Children’s Commission called ‘Children of San Benito in action’ to work with the local council and the adults in the township to make safer a number of public places for children to play in and to be able to move around without being molested, especially the girls. The work proved very successful, and we had the inauguration of the San Benito maze park at the end of 2016. Soon afterwards a second park was opened, another group of children we were working with organised that one. The children are well able to speak in public, and many of the leaders are girls.

Then we ventured outside of Lima. We received an invitation from a young Peruvian parish priest who worked high up in the Andean mountains, in the department of Ayacucho. He was based in the town of Pausa and heard of the work of Warmi Huasi from a parishioner of ours. He was very much worried about the risks facing children from men and others in his parish.

After an initial study in 2015, the Warmi Huasi team, relying on what we had learned in Lima, set up a reading club first in Pausa and then in the outlying town of Lampa for children between 6 and 12 years of age. Two years later 78 children are participating regularly in Pausa and 32 in Lampa. Each club then formed their own children´s committee, so their voices could be heard by the adults in their communities. They also made proposals to their local municipalities on the need to provide safe places where the children can play and also suggestions on how clean up the rubbish and make the environment safer in their towns.

A big bonus from this work is that the Provincial Municipality in Pausa did not have a functioning Committee for the protection of children and adolescents which is an obligation for them. The Warmi Huasi team encouraged the setting up of the Committee, which is now in place, and monitors its progress, offering workshops to help the different municipal offices know their responsibility, along with representatives of the police, the judiciary and the ministries of education and health.

The local communities in Pausa and Lampa are more aware of the need to protect and to listen to the children and the news is spreading around the villages and towns of Ayacucho about the reading clubs and the growing voice of children demanding they be treated with dignity, that their rights be respected and that they be not mistreated or abused.

First published in the August/September issue of Columban Mission.