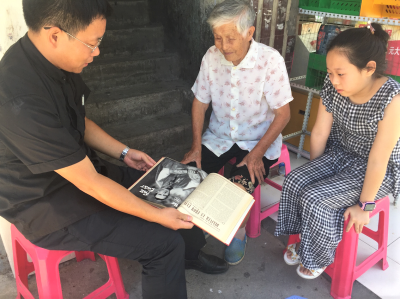 Two weeks ago, Fr Paul announced with great excitement what seemed to be his discovery of the pearl of great price. In terms of Church history in this area of China, the discovery brought a broad smile to his face.

The source of his excitement was the news shared with him by an 86-year-old woman during one of his pastoral visits to a nearby village. Shen Fang Zhen told him that she remembered Bishop Edward Galvin, co-founder of the Missionary Society of St Columban and first bishop of Hanyang, who was eventually forced to leave China in 1952. Hanyang diocese encompasses part of Wuhan city and stretches a distance of 200 km into the countryside.

A few days later Fr Paul decided to bring me to meet Shen Fang Zhen. We brought along a copy of the May 1956 Far East magazine which commemorated the life of Bishop Galvin who died from leukaemia in Ireland earlier that year.

Our journey to her home in a small village near Xiantao city came to an abrupt end as we walked up the narrow pathway through her vegetable garden. From a distance we could see a large padlock on the frail wooden double doors of the grey house that is typical of homes in these villages. As we turned around a few neighbours on the quiet street greeted us and told us that Shen Fang Zhen’s son had visited earlier in the day and that they were probably gone to his home in the city.

We returned to Xiantao and a few phone calls confirmed that she was with her son at his small shop in the city. Arriving at the shop, we were greeted with the warm welcome that one might associate with a shop on the high street. Cold drinks were passed around in the hope of bringing some relief from the summer heat.

We sat down with Shen Fang Zhen for an animated conversation. She recalled that her opportunity to meet Bishop Galvin on a regular basis took place during the second part of her primary education at Wen De Primary School in Hanyang city, a school run by the Church. At that time her older brother was working in one of the parishes in Hanyang city and had arranged for her be admitted to the school.

She spoke of Bishop Galvin as a kind person who visited the school regularly and showed great interest in the students. As she continued to talk, she mentioned that he had made a deep impression on her in a setting where the Church also ran a nearby hospital. While we spoke in the simple space beside her son’s shop, we needed to move occasionally to allow a few residents through to reach the stairs that leads up to their homes. As we shuffled our stools to create space for the arrival of patient residents, it seemed that some aspects of life might still be the same as when Bishop Galvin lived in this area of central China.

In terms of timing, our meeting with Shen Fang Zhen seemed appropriate. August 21st of this year marked the 100th anniversary of the arrival of the first group of Columban priests to Hanyang. Frs Edward Galvin, John Blowick and Owen McPolin had arrived ahead of the first group to find suitable accommodation for the newly founded missionary society that had China as its initial focus.

A prolific letter writer, Fr Edward Galvin wrote to the Columban seminarians in Dalgan Park, Ireland in the summer of 1920 with the stimulating words: “There is always close at hand a vast unexplored tract of Chinese language and literature, wherein we may find pleasure and food for thought for the next fifty years! Ah, yes, you sure will agree we are men highly favoured by heaven. We lost Dalgan, it is true, but by losing it we found Han Yang – and happiness.”

Being favoured by heaven may not have be the first impression that came to mind for newcomers to this part of China in the searing summer heat of 100 years ago. In the years that followed, Fr Edward Galvin faced many challenges to ensure that the missionaries and others around him could believe that they were favoured by heaven as he led by example in the missionary Church’s efforts to preach the Gospel of Jesus Christ in China.

Over a period of more than 30 years in Hanyang, considerable effort was made in parish work, medical care, education, relief work and vocational training schools. At times painful cutbacks were made to missionary projects due to a drop in financial support from other parts of the world.

In a 1927 ceremony in Hanyang, Edward Galvin became a bishop at the age of 44. The next number of years brought their own struggles in times marked by political ferment, wars and floods, the severity of one inevitably competing with the tragedy of the others.

In the years following World War II the unfolding of domestic political events led to increased pressure on all Christian missionaries in China. In 1947 Bishop Galvin claimed in a letter that “the pep has gone from me”. The difficulties of the time were obviously taking their toll on him. Almost as an echo to the letter that he wrote in the summer of 1920, that letter of 1947 also made a clear statement of faith when he wrote, “… but God is still in heaven”.

The eventual departure of missionaries from all parts of China in the 1950s brought an end to the dedicated apostolic involvement of many people in China. Within a few years the Church was suppressed by the civil authorities. A quarter century of silence was to follow, a silence assumed by some people to mean that the Christian faith had disappeared from China.

In the early 1980s economic reform and some religious freedom led to the re-emergence of faith communities all over China. If written, the stories of faith tested in the fires of silence would fill several libraries. Aside from what has been recorded in print, there is something refreshing about meeting a person like Shen Fang Zhen, a living link with earlier years, a person who knew one of the missionary leaders of her childhood. As an elderly woman, her energetic disposition and friendly smile in discussing Bishop Edward Galvin’s life is a witness to the mystery of how the history of the Church is alive in the hearts of people who bridge the gaps of several decades.

Bishop Galvin was escorted from St Columban’s Cathedral, Hanyang on the 17th of September 1952 in preparation for his departure from China. In a letter recalling the events of that emotional day, he described how he turned around for one final look. Of that painful moment he wrote, “I blessed the compound and the cathedral, the whole diocese; its priests, its sisters and the people. I put them under the protection of Our Lord and his Blessed Mother and of St Columban, the patron of the diocese and of the cathedral. It was all that I could do.”

A hundred years after his arrival in Hanyang, and in spite of so many difficulties, Bishop Galvin’s presence is still recalled by Shen Fang Zhen for other people to hear. On the day following the centenary of the arrival of the first group of Columbans in Hanyang, two religious sisters made their final vows in Hanyang diocese during a Mass attended by many people at Holy Trinity Church, Xiantao.

It was a ceremony rooted in the past just as much as it expressed hope for the future. As written by a young Fr. Edward Galvin in his 1920 letter, being “favoured by heaven” might be an appropriate way to describe people’s experience in what is still happening under God’s guidance in the Church in this part of China.

One hundred years ago the first Columbans arrived in China. Read Fr Neil Collins’ article on the challenges they faced in places like Hanyang – “a city of no Catholics”. https://columbans.ie/first-columban-mission-to-china-1920/