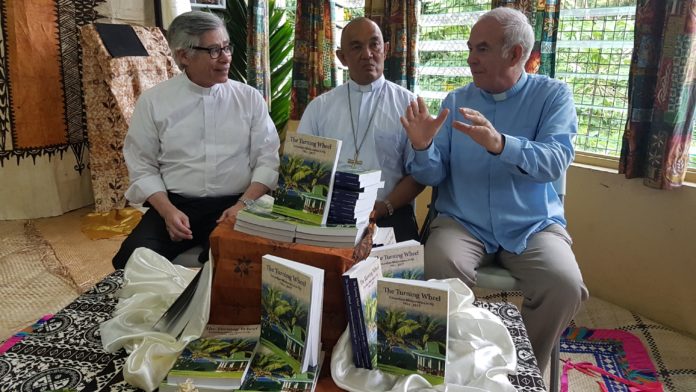 ‘The Turning Wheel’ by Frank Hoare narrates the work of the Columban missionaries in Fiji over 65 years. It also traces in summary form the changes that have happened in Fiji and in the Catholic Church there during that time.

It traces the maturing of a Church that in the 1950s was completely dependent on missionaries but which is now sending out its own missionaries.

There are four parts in the book.

Part I deals with the development of parishes and schools; Part II with the renewal that took place after Vatican II until the first coups d’etat in Fiji.

Part III deals with the Columbans’ response to the coups and their mentoring of local missionaries, both ordained and lay.

Part IV examines and evaluates the different aspects of the missionary work done over the 65 years.

There are many human stories in the 300 pages of ‘The Turning Wheel’ and 149 photos to illustrate the text.

Copies of ‘The Turning Wheel’ can be purchased through our shop here: https://columbans.ie/product/the-turning-wheel/

Alternatively, you can email: [email protected] or purchase directly from the Reception Desk at Dalgan or Telephone: 046 9098275 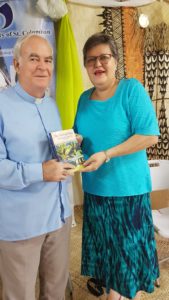 Explaining why he wrote his book An tOileanach (The Islandman) Tomas O Crohan said: “I have done my best to set down the character of the people about me so that some record of us might live on, for the like of us will never be again.”

He was writing about the final years of the people who lived on an Island off the coast of Kerry in Ireland before they left the island forever.

I have the same feeling about Western foreign missionaries to Fiji. The last Columban ordination in Ireland, U.S., Australia was more than twenty years ago. There are no Columban seminarians there now.

We are blessed that the young churches of Asia and the Pacific are now the mission sending Churches. That is the reason for the name of the book we launch today. The wheel is turning. Those who were the subjects of mission are now the missionaries.

But before the sands of time obliterate the footsteps of those who went before us it is fitting that we remember them and the example they gave us.

The inspiration for this book came from Donal McIlraith who has a great sense of celebrating anniversaries. He knew that back in 1990 I had done interviews with some of the Columban pioneers who arrived in Fiji in 1952. I sent those transcribed interviews to the Society archives thinking that someone in the future might want to write their story.

In his wisdom Donal decided that I was the one to bring this project to completion. I had also done interviews with many Indo-Fijian people in Naleba and Raviravi thinking that it would be interesting to compare the Indo-Fijian view of Columbans and their work with the view the Columbans themselves. Though I never got around to that those interview were available sources for this book.

There were other resources too. Fr John Mahoney wrote some essays about Fiji when he did his Masters’ degree at Fuller College in California and I edited and published them as Mission and Ministry in Fiji in 1994. Fr Charlie O’Mahony, one of the pioneers, compiled a booklet called “Columbans in Fiji: Fifty years of Missionary Service,” in 2002.

He also wrote a page or two about most of the Columbans who worked in Fiji up to that time and about the different parishes and apostolates they were associated with. There was plenty of correspondence available in our archives in Suva. I also consulted the archives of the Archdiocese and the Columban archives in Ireland and in Australia. There was quite a lot of material available.

When I asked Donal who my primary audience was to be he said it should be people in Fiji, especially our young Pacifican Columbans and lay missionaries so that they would understand and appreciate the work of Columbans who had gone before them. That is why I decided to include many photos and adopt a talanoa (narrative) style of writing.

I left the more abstract theorizing, the missiological reflection based on the experience, until the last chapter. I did however keep overseas readers in mind too by inserting a number of maps so that they would be able to have a sense of where the places talked about were situated.

I resisted taking on the job of writing this history a number of times. Then Donal dangled the carrot of a writing sabbatical in Melbourne in front of me. I capitulated. I would like to thank the Australia/New Zealand Region for the hospitality and good company I enjoyed during the three months I spent there. 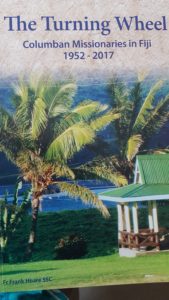 I want to thank Nemani Lui, the layout designer, for his patience and help with the book and for his interest and support right up to now. A Divine Word missionary and Church historian, Fr Larry Nemer was my valued supervisor in Melbourne. Fr David Arms, Fr Roger McCarrick and others gave valuable help in proof-reading.

I thank you all for coming and I hope that those of you who read the book will enjoy it and find happy memories of people whose journey intersected with yours. I want to thank Archbishop Peter Loy Chong for agreeing to launch the book even though he leaves for overseas early tomorrow. Vinaka saka vaka levu.

Just published in January 2018 is a new book entitled ‘The Turning Wheel’. Its author is Fr Frank Hoare SSC, well known for his pastoral work in several parishes in Fiji, for his expertise in psychology, and for his work for dialogue across cultures and religions.

The book covers in interesting detail (300 pages) the 65 year history in Fiji of the Missionary Society of St Columban (‘the Columbans’), of which Fr Frank is himself a member.

The book is a very fine assembly of historical facts, personal interviews (some made, fortunately, many years ago) and fascinating reflections on what was happening ‘behind the scenes’, as it were, or at a deeper level. 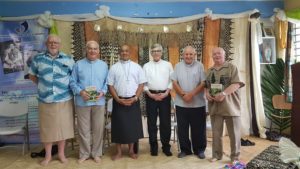 Obviously, Fr Frank’s interpretation of events is a personal view, but it is a very valuable one, since Fr Frank has been working in Fiji for two thirds of the 65 years covered in this book.

Being a contemporary of Fr Frank myself in Fiji, I feel very comfortable with his presentation: it all rings true and very insightful. The book is well endowed with photographs, which provide even more life to the story. There are also at the rear of the book a list of personnel, comprehensive endnotes and a bibliography for those who wish to pursue further some of the issues.

After an overall sketch of the book’s contents, the narrative begins by describing the coincidence of events which resulted in the coming of the Columbans – 13 of them – to Fiji in 1952.

There were many ups and downs (some quite humorous) in learning language (Fijian for some, Hindi for others) as well as in adapting to the local cultures.

The Columbans took over the running and developing of several parishes in Fiji, as well as taking on certain administrative positions. Early on, Xavier College was founded and for many years staffed by the Columbans, developing into a prestigious secondary school.

For many years too, the Columbans laboured for education in Fiji through their involvement in Corpus Christi Training College. The early period of mission, of course, saw the very significant transition from Fiji’s being a colony to being independent.

Meantime, as the Columbans became more familiar with the local scene, they were also transformed by it. As the story unfolds, Fr Frank goes into more detail about the lives of a few individual Columbans.

This reveals how they were reflecting on their lives and work, and learning a lot from what they were encountering. The focus moves more away (not totally of course) from the idea of conversion to the idea of empowering others, walking with them, and creating greater bonds between the peoples of Fiji.

This focus became even more necessary as Fiji was ravaged by its series of coups. The phrase “justice and peace” became very prominent, to which was shortly added “integrity of creation” as the state of the environment, even in Fiji, came to the fore. Climate change has given even more emphasis to this in recent times.

The rethinking going on, together with the changing times, also brought about the realization that it was not just Columbans (and other foreigners) who were called to do missionary work, but that, as the Church in Fiji matured, it was time for the Fijian Church too to become missionary – for Fijians to share their faith abroad and to collaborate with other peoples in the challenges facing them.

It is to this changing role that the book’s title ‘The Turning Wheel’ chiefly refers. The future of Columban Mission is passing from the hands of the ‘valagi’ to those of the sons and daughters of Fiji.

The various strands of the story are interestingly woven together with good reflections on the wider meaning of what was going on provided throughout by Fr Frank. He concludes his account by taking a brief look back over the Columbans’ history in Fiji, its meaning, and what lies in store for the future.

The book is a good read in itself for anyone. There are parts which will be of particular interest to historians, anthropologists, missiologists, and people concerned with intercultural relations. All in all the book is a fine piece of work and worth a lot more than the bargain price of just $12!