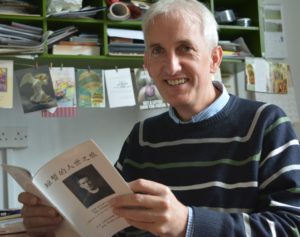 From Cork to China – a Columban Journey

Forty-nine-year-old Fr Dan Troy hails from rural north Co Cork. He grew up on a farm in Newtownshandrum and later studied civil engineering at university. While working as an engineer, he was seriously considering a missionary vocation. “I got to meet great people on the building sites but I decided I would at least try priesthood. I didn’t want to wait until I was 45 and it would be too late.”

He joined the Columbans in 1991 and was ordained in 1999 when he was 32. After serving in St John’s Parish in Limerick city for a year, in 2000 he was sent to China, where he has ministered ever since. When he was home recently on a visit, he brought with him a newly minted copy of the first Chinese language edition of ‘A Journey Too Short’ on Fr Charles Cullen (1897-1923), one of the early Columban missionaries to China, a subject he is deeply interested in.

Even after sixteen years in China, Fr Dan continues to reflect on why he is in China and the real meaning of his presence in the country. “It has to be a faith-based understanding. In spite of any publications we might do or stories we might write or projects we might engage in – it is all a drop in the ocean in terms of the scale of China. If we just disappeared in the morning, China is not going to miss a heartbeat.” He believes that the presence of people from overseas communicates how the Universal Church is deeply concerned about the Church and the people of China.

As to whether the people he encounters in China understand his presence, Fr Dan thinks they do at a deep level. “It has been said to me by someone I knew for a number of years – a seminarian – ‘You could have an easier life in another country but you have decided to come to China; that is good.’ That in some way symbolises how they see it. The local people know how complicated it is with the restrictions. If people from overseas are willing to live with that uncertainty, they appreciate that and our presence there. It is important to be there. China is the country with the biggest population in the history of the world – if the Church doesn’t take that seriously, where are we going?”

Fr Dan has seen some rapid changes in China over the past sixteen years. “I live in a city called Wuhan which has 10 million people. It is a second tier city. The Chinese define it that way. Beijing and Shanghai are the big metropolises and they get the major funding. The second tier cities are considered less important. Wuhan would be a second tier city but it still has a population of 10 million! The scale of everything in China is huge. When you tell people the size of Ireland they actually laugh.” 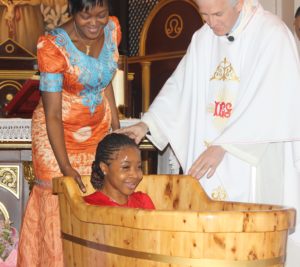 “The Church in China is a very small percentage of the country’s population. There are 10 million Catholics in a population of over one thousand million… it is a small number of people. These are a very dedicated people. They are still emerging out of a penal time experience.” He explains how in the 1950s, all foreign missionaries were expelled, with the last Columban told to leave in 1954. Only Chinese clergy were left while the Church itself was under government control. The divisions today between the underground and overground communities in China are well known. For Fr Dan, Pope Benedict XVI’s Letter to the Catholics of China in 2007 was an important development in which the Pontiff encouraged reconciliation stressing that there was one Church in China, though there are different experiences within that one community. “People took that seriously, so there has been progress and while it is not complete, it is certainly better.”

Though Fr Dan is known to be a Columban priest, officially his role in Wuhan is not as a parish priest. “The government, without writing it down, have their own tolerance of what people like us can do. If it is small scale involvement, it is ok.”

It is possible is to get to know people locally in the Church. Fr Dan helps with the pastoral care of many Catholics from overseas who are working or studying in China. In addition, his skills as a spiritual director are often called on by religious communities. “There are many missionary groups like ourselves who are making a specific contribution which is small in scale but collectively, along with all the other missionary groups, is a serious contribution.”

He also helped set up a project to help people with special needs. He started a sheltered workshop where participants are paid for the Christmas cards they make. Its first participant was Li Qiong, a young woman who is still with the project today. Due to her cerebral palsy, she had never been to school, and she was ten years of age before she began to walk, while her speech remains restricted. “Her parents could never get her into school so she has never had any classmates – she has never had a job or workmates. She was isolated.” Yet within three years of starting on the project, she got married and a daughter followed, “A fine healthy girl.”