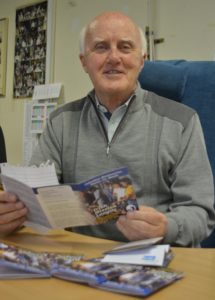 “Ordained in December 1964, I went to Korea in September 1965. After two years at language school, I was appointed to the newly formed diocese of Wonju alongside Pat Dawson, who was one of the first Columbans in Korea. He was ordained in 1933 and by this stage he as in Sam Chok on the East coast, having spent most of his life on the island of Cheju where he was interned by the Japanese for four years during World War II. I just had a year with him and then it was up to the mountains on my own to a coal mining area called Hwangji. There were about 40,000 people in the town and I was probably the only English speaker in the place – that was a fast-track way of getting into a culture.

Recent headlines reminded me of the time when North Korean guerrillas landed at several places along the coast and when they were intercepted, they tried to escape back up through the mountains where the parish was. So we had months of firefights and curfews from 4pm in the evening to 8am in the morning.

In 1970, I went to the East Asian Pastoral Institute in the Philippines for its ongoing education programme. We had come out of a pre Vatican II era and this institute gave us a whole new perspective and something more to bring back with us to a Korea that was now really a military dictatorship. We were ready to join in with the Church and increase our communities’ participating in keeping alive some semblance of democracy.

At that time, one of the few voices heard in protest was that of our bishop, Daniel Tji Hak Sun. These were tense years of agitation and demonstrations and then, in 1975, Bishop Tji made a courageous “statement of conscience” about the State corruption and injustice. He had gone to Germany when a warrant was issued for his arrest. I happened to be due home so I met him in Munich airport with smuggled papers. He left and went back to Korea and was arrested at the airport. I was just returning to Korea when he was released. In a photo taken at the time, most of the Columbans have ‘protest beards’ which they had grown in defiance of the authorities’ ban on facial hair.

That phase of the struggle continued until President Park was assassinated by his own Intelligence Chief in 1979. I had moved to Seoul as part of the Columban leadership team in 1977 and when I could escape from administration found  time to work with our students on the Overseas Training Programme to minister in a poor hillside community on the margins of the city.

When I finished that job I landed back in Ireland with a ticket to tour the Columban world as Education Co-ordinator. The main focus of the next ten years was ongoing renewal for all and new training programmes for students from our mission areas. In 1996, I helped with a survey of the work of the Mission Office here and, once captured, I’ve turned into one of its longest serving inmates ever.  I’m coming up for release just now with Fr Ray Husband ready to take over after many years in the Philippines.  I’m sure he will find it as rewarding as I did to work with such faithful supporters and dedicated staff. Thank you all.